It took a while for Matt O’Connor to select exactly where he wanted to start his NHL career, but on Saturday the hockey world finally found out.

While the candidates for O’Connor’s future were narrowed down to four teams (Ottawa Senators, Edmonton Oilers, New York Rangers and Vancouver Canucks), it turned out that Canada’s capital seemed like the best fit for the Boston University goaltender.

With the signing of O’Connor, the Senators now have four goalies who are either already capable of being a No.1 netminder or will be in the foreseeable future.

Knowing that O’Connor will undoubtedly start his professional career with Binghamton in the AHL, Senators GM Bryan Murray has an enormous decision to make. Craig Anderson, Robin Lehner and Andrew Hammond are all NHL calibre goalies, but one has to go.

Time for Murray to weigh his options.

And if history has shown us anything, it’s that after every dominant season, Anderson has a bit of an off year the next time around. 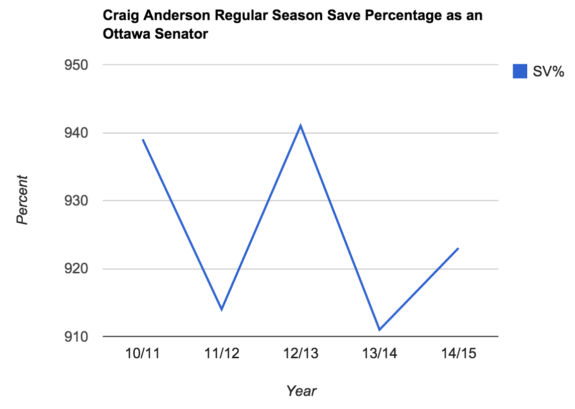 Now, hunches aren’t at all a great decision-making tiebreaker, but it’s something to think about.

The main positive that would come out of trading Anderson would be the return. Out of all three Senators goalies, he’s probably the one that can draw the most attention. And with the postseason he just had — a .972 SV% with a 0.97 GAA — Anderson could be a great acquisition for a team that needs a No. 1 goaltender right away.

The downside is obviously that the Senators would be losing their starting goaltender, and though there is confidence in Lehner and Hammond, there’s also a substantial amount of concern.

While Hammond has only played 27 games at the NHL level — albeit, most of them outstanding, miraculous performances — Lehner doesn’t hold the most experienced track record either. The 23-year-old Swede has yet to appear in 100 NHL games and that might not be the only reason to be nervous.

As goalie trade speculation ramps up, it should be noted that as of 10 days ago, Lehner was still having symptoms & was shut down again.

If Anderson is shipped off to another team, there’s hope in the younger goaltenders, but there are no guarantees.

Similar to Anderson, Lehner is a very sought after commodity. The asking price for the young netminder wouldn’t be at all cheap and Ottawa could definitely swing something to their liking.

The one huge problem of parting ways with Lehner is that Ottawa would never be able to find out what his ceiling is. Just like when they threw away Ben Bishop to the Tampa Bay Lightning only to discover how truly talented the 6 foot 7 goaltender was.

For a few years now, Lehner has been told to be patient, to wait his turn, even though he feels he’s ready for the starting position. And he’s shown some promise in the past, especially in the 2013-14 season when he outplayed Anderson for the better part of the year, even taking over the No. 1 job for quite some time.

All that is up in the air now, though. Lehner had an awful year as a full-time backup behind Anderson, failing to crack double-digit wins and posting a .905 SV%.

Only time will tell whether Lehner is a starting goaltender, but he may have to find out some place other than Ottawa.

Hammond was supposed to be the goalie to bring a better draft pick into the hands of the Senators, not skyrocket them to the postseason. But he did, and now you can’t just ignore the success.

After posting a record of 20-1-2 last season, Hammond is here to stay. At least, in the NHL, that is.

If he chooses to sign in Ottawa this summer, seeing as he is a free agent come July, then he could become trade bait. And though the return would amount to nothing compared to what Lehner and Anderson could bring to the table, it’s better to gain a couple draft picks than see him walk away on his own.

It’s the safest option. The Senators get to keep their veteran and their future all in one, while essentially trading away a lottery ticket.

But what if that lottery ticket was a winner?

There’s a lot the Senators have to think about this offseason.

What do you think the Senators should do with their goaltenders? Let us know in the comment section below!