Controversy; it’s a part of every sport and last night’s Columbus Blue Jackets vs. St Louis Blues game is no exception.

With 13:20 to go in the third period and the Blue Jackets trailing the Blues by a score of 2-1, a potential game-tying goal was waved off by referee Ghislain Hebert due to, what he deemed, as goalie interference on Blue Jackets forward Matt Calvert.

A note to those who missed the game: this call arguably changed the entire dynamic and outcome of this game. The Blue Jackets were buzzing while the Blues only managed 3 shots in the entire third period, so one could make a legitimate argument that the game would have gone to OT or that a different call on the play would of at least given the Blue Jackets a better opportunity to win/gain a point or points.

And Panger is absolutely right; these are fine lines. The goaltender interference rule is one of the most difficult, subjective rules to interpret and thus, call on the ice. The average fan would see a play like this and have no idea why that ‘goal’ would be waived off.

But much like other goaltender interference calls, and seemingly every call officials make these days, one question still remains: was it the right call? Blue Jackets fans certainly don’t think so and even some Blues fans said that their team finally lucked out on a bad decision by the referee(s).

Are they correct in their assertion that the wrong call on the ice was made? In order to determine the answer, let’s first take a look at the goaltender interference rule.

69.1 Interference on the Goalkeeper – This rule is based on the premise that an attacking player’s position, whether inside or outside the crease, should not, by itself, determine whether a goal should be allowed or disallowed. In other words, goals scored while attacking players are standing in the crease may, in appropriate circumstances be allowed.

As clearly stated in the first paragraph of the rule, the determining factor for whether a goal shall be allowed or disallowed will not be determined by just the positioning of the player. There are more factors at play than just the forward’s positioning near/in the crease.

The goaltender interference rule then continues to explain when a goal should be disallowed:

Goals should be disallowed only if: (1) an attacking player, either by his positioning or by contact, impairs the goalkeeper’s ability to move freely within his crease or defend his goal; or (2) an attacking player initiates intentional or deliberate contact with a goalkeeper, inside or outside of his goal crease.

Simple enough; if a player interferes with the goaltender’s ability to make a play on the puck, inside or outside of the goal crease, a goaltender interference call may be properly issued. This is the true rationale of the rule: a goaltender should be unrestricted in his attempt to make a save.

But now what if there’s incidental contact? You know, the kind of contact a forward didn’t initiate himself, but rather occurred due to the effect of a hit or an illegal act by an opposing player?

Incidental contact with a goalkeeper will be permitted, and resulting goals allowed, when such contact is initiated outside of the goal crease, provided the attacking player has made a reasonable effort to avoid such contact.

Ding ding ding; ladies and gentlemen we have found the issue and its subjectivity. What combination of words in the entire world can explicitly describe one’s “reasonable effort to avoid contact”?

And to make things even worse, nay even harder on the referees, the league has asked them to determine all of this without the use of video replay!

The rule will be enforced exclusively in accordance with the on-ice judgment of the referee(s), and not by means of video replay or review.

So a referee, while in the midst of a very fast-paced game, must not only determine the infraction at hand, but also eliminate all the other potential infractions he could give to a player on a goalie interference call.

Clearly a lot goes into making a goalie interference call. How does a referee determine whether or not a goal should be allowed or disallowed? They refer to this:

The Referee’s Guide to Goaltender Interference 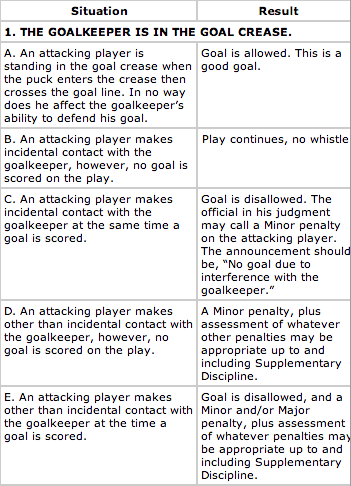 Since we are only examining the situation that occurred in the Blue Jackets vs. Blues game, I’ve omitted the other portions of the guide (2-7) because they can be eliminated as possible calls; they don’t apply to this game’s goalie interference call. Only Section 6 has portions that apply to this call and will be referred to justly.

Reviewing the play, Calvert establishes position in the crease before Blues defenseman Roman Polak even touches him. Thus, we can now eliminate Section 3 of the guide which discusses when a player is forced into the crease.

Before Blue Jacket’s forward Cam Atkinson shoots the puck on net, Calvert has positioned himself in the crease but has yet to make contact with Blues goaltender Jake Allen, so everything regarding the play is currently kosher, err, legal.

The shot then comes and it appears as if Calvert is just standing there in the crease, tying up his man Polak in order to gain position for a possible rebound. Legal goal right?

The 56-second mark of the video gives us the best view of why the play was deemed illegal.

As Atkinson takes his shot, Allen attempts to move up to the top of the crease in order to cut down the angle of the shot.

As Allen tries to move up, he notices Calvert is all up in his grill inside of the crease; this is the moment in the video when Allen places his glove hand on Calvert’s back.

Allen cannot make it to where he would like to be inside his crease and according to our definition from before, goals should be disallowed if an attacking player, either by his positioning or by contact, impairs the goalkeeper’s ability to move freely within his crease or defend his goal.

Looking above at part C, Section 1 of the goaltender interference guide, even incidental contact of this nature forces the referee to disallow any potential goal.

Now I know what you’re thinking Blue Jackets fans: “but Polak tied Calvert up in the crease. What is Calvert supposed to do there?”

I hate to be the one to tell you this, but that fact is irrelevant. The goal would have been disallowed regardless of whether or not Polak has Calvert tied up in the crease.

Why is that? Take a look at part C and D, Section 6 (Crowding the Goalkeeper): 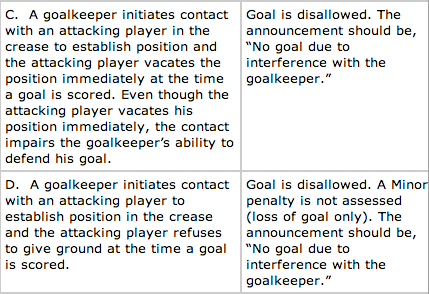 According to the rule, Calvert either needs to be outside of the crease before the shot occurs or avoid making any contact. Again, the rationale of the rule is to give the goaltender the ability to make a save. Did Calvert make a reasonable effort to avoid any contact with Allen which, mind you, is the only way this play would be deemed legal and not goaltender interference?

No. Calvert clearly impedes Allen’s attempt to make the save. Again, the rationale of the rule.

The correct call in this situation was made.