It’s getting to be time to gear up for the final push if your team has any hope of making the postseason. If you’re a NHL team on the cusp with goaltender problems, the trade deadline (March 2) may be too late to salvage your season. Teams like the Minnesota Wild need help now.

With that in mind, here’s a list of goaltenders who could be available via trade this season. (All stats current to Friday afternoon.)

At 5-on-5 this year, Craig Anderson has a .942 save percentage (EV Sv%). His adjusted save percentage (AdSv%) is slightly lower at .936. So why would the Sens be interested in moving him? He’s got three years on his contract after this with a cap hit of $4.2M and is already 33-years old. The team is down right now, but working their way up and aren’t likely to be a Cup contender next year. When this team is a contender, it’s probably going to be with Robin Lehner at the helm.

Lehner has performed admirably this season with a .912 EV Sv% and AdSv% at 5-on-5. It’s not quite as good as Anderson, but the team trusts him and could turn Anderson into assets that really benefits the team in the future. Anderson could likely be had, but the price might be high. It’s far from a must-trade situation for the Sens and Anderson is performing well. They could win big in a trade, but they win if they keep Anderson on the roster too.

Of goaltenders who have played at least 300 minutes this season, Niklas Backstrom ranked 54th of 58 in 5-on-5 Sv%. Backstrom is certainly available, the Wild were rumored to have shopped him over the summer, but it’s hard to imagine any team really needing him. There are a few goaltenders that might fit in this category of netminders with past success, name recognition, but little to show for it in terms of recent performance. See: Smith, Mike. Nabokov, Evgeni.

The cost would likely be low, since the Wild would be glad to be rid of his contract which extends through the end of next season. While the Wild would likely be glad to be rid of the contract, a trade would have to involve another goaltender or a simultaneous trade with another team where the Wild acquire a goaltender. Likelihood of Backstrom being in anything but a Wild jersey at the end of the season? Extremely low.

He was a nice stop-gap for the Blues while Brian Elliott was out, but with Elliott back the Blues have their tandem with Elliott and Jake Allen lined up again. The Blues may be willing to give up Martin Brodeur for a reasonable price to clear roster space. They’re currently carrying three goaltenders and Brodeur has been a healthy scratch in the last four games, with Jake Allen serving as a healthy scratch before that. The Blues are looking to get him off the roster and the price might be low.

Like Brodeur, Ilya Bryzgalov was a nice stop-gap solution for the Ducks while the team struggled with injuries to both Frederik Andersen and John Gibson. But both Andersen and Gibson are healthy now and Gibson is performing well with the Norfolk Admirals in the AHL. He’s 2-2-2 with a .928 Sv%. If the Ducks can turn Bryzgalov into something and run with their young duo in net, that’s likely to be a win all around for the Ducks.

The problem? Bryzgalov gained a little clout after a nice stretch performance for the Minnesota Wild, but he’s been pretty rough in very limited time this season.

Felix Sicard wrote on THW recently that that Ducks should trust Bryzgalov instead of pushing Andersen and bringing up Gibson. While I’d contend that Bryzgalov hasn’t been good enough for the Ducks to make a run with a .885 EV Sv%, Bryzgalov isn’t likely to get a ton of attention in the trade market unless a team is in dire straits, so Felix may have the right idea there. (Here’s an in-depth look at the odds of Gibson returning to the NHL this season.)

The Sabres look like they’re rounding the corner a little, even though their possession is shockingly bad — a league-worst 37.8% CF — and they’re still knee deep in the McDavid/Eichel Sweepstakes. But I would guess that everyone over the age of 25 on the team is for sale for the right price.

Jhonas Enroth is particularly interesting to me. He’d be a rental, but he’s been buried behind a bad team and Ryan Miller for years and has posted some nice numbers in that time. Over the last three years he has a EV Sv% of .925 and an AdSv% of .926. It’s probably time for Enroth to find a real opportunity to be a number one on a competing team. He’s 26 and could be a great fit for a number of clubs.

Michal Neuvirth, who would also be a rental, should also be available and has posted slightly better numbers than Enroth.

The Leafs find themselves with a new coach and on the outside of the playoff picture at the season’s mid-point. They’re having struggles, but they’re just a hot streak away from a wild card spot. Jonathan Bernier has been great this season and the 26-year-old James Reimer has, again, seen his playing time limited. If the Leafs can get an asset in a trade for Reimer that helps their push to the playoffs, the second string goaltender with a $2.3M cap hit should be able to be had.

Reimer’s been inconsistent this year, going hot and then very, very cold at times. But he also showed flashes of starter potential last year when he’d go hot in longer streaks while filling in for the injured Bernier. His .902 EV Sv% this season isn’t ultra impressive, but it’s a little heartening that his adjusted numbers are higher than that. If you’re a team like the Wild, Islanders, or Stars, Reimer might be worth the risk. (Though he’d probably only have starter status on the Wild of those three teams.)

This tandem looked very good on paper at the start of the season. Ben Scrivens finished last season with an impressive .932 EV Sv% and Viktor Fasth is a more than capable back-up.

Unfortunately for Edmonton — who, despite constant ridicule, are a better team this year — neither of these goaltenders has been any good. Scrivens has a .909 EV Sv% and Fasth has a .894 EV Sv% this season.

If a team has needs in net due to injury, it’d be hard to imagine that one of these two couldn’t be had. Everyone seems to be for sale in Edmonton. No one’s job is safe. Well, except for Emperor MacTavish.

The Hurricanes have tried to ship Cam Ward out for years now. Seems like it’s a perennial storyline and somewhat analogous to Roberto Luongo’s protracted situation in Vancouver. That’s a situation that no one really wants and it sounds like Ward was ready to leave the trade storylines behind.

Well, Ward trade talk is circulating again. If the Hurricanes, who are in second place overall among teams tanking the season, believe it’s time to start a bit of a rebuild around a figure like Connor McDavid or Jack Eichel, then it’d make sense that they’re still willing to part with Ward for the same reasons as before. He’s getting paid $6.7M this season and $6.8M next season in actual money. The cap hit hurts a bit, but the Hurricanes aren’t likely to be too concerned about that with their current roster. The real money hurts just as much though, when you have a team this far from the playoff hunt.

Here’s a look in chart and graphic form of how these netminders stack up against each other. This graph plots all goaltender data from the last three seasons, inclusive of the current season. Size of bubbles is time on ice, color is save percentage on high danger shots (the home plate area). 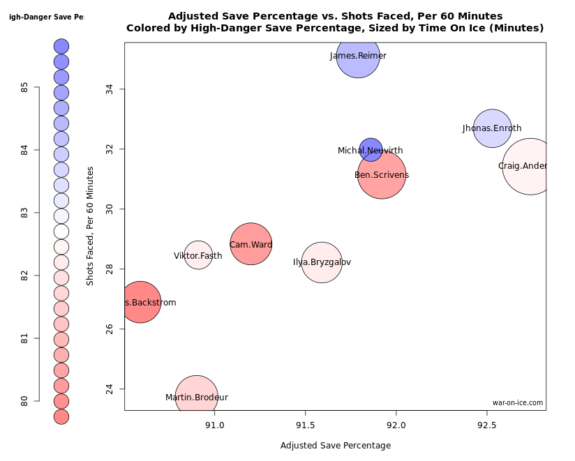 And here’s a chart looking over numbers from this season and from the last three seasons combined. For a little extra reference I’ve included Antti Niemi and Mike Smith. Niemi was heavily rumored to be a trade deadline target at the beginning of the season, but that was when there was an assumption that Alex Stalock would step up and take the starting job from Niemi. That looks very unlikely now. Niemi isn’t in the list above because the Sharks are currently third in the Pacific and unlikely to trade their starter when the back-up is performing much worse than him.

Mike Smith could also be available. He’s entering a situation somewhat similar to what Cam Ward had going when trade rumors first started. Smith has been terrible this year, has years left on his deal, and costs more than most teams are going to be willing to pay. He’s not in the list above because no one is looking to trade for a struggling goaltender with term and a huge cap hit.

All salary information taken from nhlnumbers.com. All advanced stats taken from War on Ice.