Goalie, the backbone of a hockey team. The last line of defense between the puck and the net. It’s a position not for the faint of heart, nor for the average player. It’s a spot where anything can happen, including receiving all of the praise and even more of the blame for a game’s outcome. To play goalie is to invite scrutiny beyond that of a defenseman, whose mistake may have cost a game. Ultimately, it is the puck going past the masked guy in the net that will make the highlight reels.

For a few years, the NHL has been blessed with a stable of solid players at the position of goalie. A tour around the league finds Carey Price of the Montreal Canadiens, Pekka Rinne of the Nashville Predators and Tuukka Rask of the Boston Bruins. The Chicago Blackhawks have Corey Crawford, the Los Angeles Kings have Jonathan Quick and the Calgary Flames have Brian Elliott.

All of the aforementioned have made their mark as legitimate top-flight players at the goalie position. While Price missed much of last season with a knee injury, which threw the Habs’ season into a tailspin, when healthy he is an extreme force between the pipes. Price’s absence showed with clarity how important having a strong goalie is in today’s NHL.

Yes, there are others such as Braden Holtby of the Washington Capitals, but it is not my intention in this post to run through every team and their goaltenders. But, there is a changing of the guard, even if it is gradual, where hot young talent is moving up and laying claim to a spot between the pipes.

When the Pittsburgh Penguins were heading into the playoffs, I wrote that their chances hinged largely on the play of their longtime goalie, Marc-André Fleury. In an odd way, I was right. Some would say that their chances were elevated because Fleury was out with an injury and would not be given an opportunity to “blow it” for the Pens in the playoffs. Most would agree that his recent playoffs play has been less than stellar.

Matt Murray stepped onto the ice and did not look back. Except for a brief appearance by Fleury, Murray owned the playoffs and the result was a Stanley Cup for the Penguins. This 22-year-old native of Thunder Bay, Ontario did not enter the NHL like a Connor McDavid. Drafted in the third round at 83rd overall in the 2012 NHL Entry Draft, Murray was not really on anyone’s radar. He played in 13 games in the 2015-16 regular season replacing the injured Fleury, winning nine of those games. His play in the Stanley Cup Playoffs was spectacular, and by most accounts he is the future of the Penguins in-goal.

Fleury, however, wants his net back, and James O’Brien of nhl.nbcsports.com reported recently that Fleury is headed to camp,”…ready to win my job back.” Time will obviously tell, but for the moment at least, Murray is part of the changing of the guard at the goalie position in the NHL. Fleury has a Stanley Cup, but, at age 31, may be crossing over into the back side of his career. The older veteran may have to make way for the younger player who proved he can perform on the biggest stage of all.

Martin Jones is not a rookie like Murray. He is four years older and has three more years of experience, albeit two of those years were ones in which he only played in a few games. But, Jones also represents a changing of the guard for the goalie position. The San Jose Sharks may have finally found what they have been sorely looking for in Jones, a goalie that they can rely on long-term. 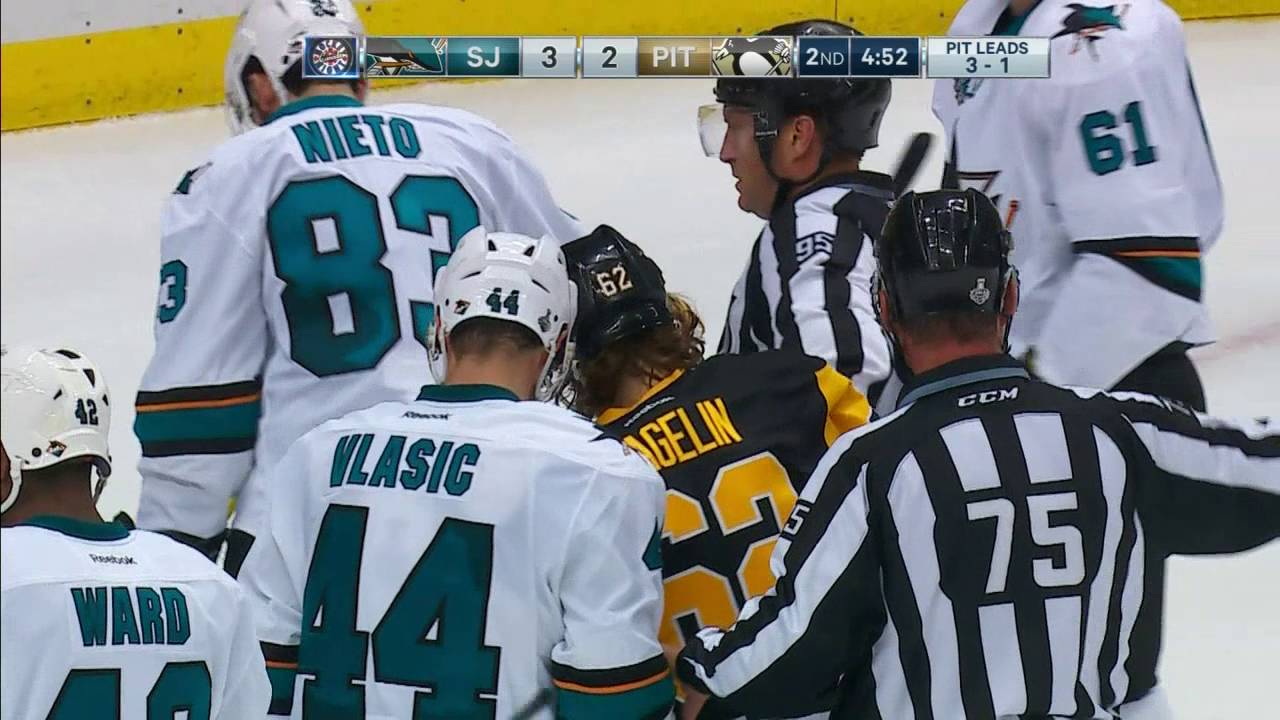 After several years of trying to make it work with Antti Niemi, the Sharks found in Jones the stability that they wanted. He guided them to a 4-1 series victory over the Kings, a drama I wrote about that featured the teacher, Quick versus the student, Jones. The student excelled and the Sharks advanced all the way to the Stanley Cup Finals. Only a red-hot Penguins team with their red-hot goalie stopped San Jose from realizing their goal of hoisting the Cup.

Jones may be another in the changing of the guard where NHL goalies are concerned. Seeing his first full season last year may not qualify him as a rookie in the literal sense, as it does Murray, given his time in Los Angeles, but Jones is still relatively young and does not look to be taking steps backwards. While the Sharks may have missed their window of opportunity by not closing the deal against Pittsburgh, they will very likely be a playoff team again, and Jones will provide the stability they need in goal.

There are teams like the Carolina Hurricanes that genuinely need a hot young goalie to help them turn the page. Like Fleury, ‘Canes goalie Cam Ward has a Stanley Cup, won when he was a rookie in 2006. Carolina has signed him to a two-year extension, with Eddie Lack as the number two. Sadly, unless Lack’s game changes, he is not likely the future of the franchise.

At 32, Ward may also be crossing over to the back side of his career. He may have a couple of good seasons left, but the Hurricanes need to be looking for the next Murray or Jones to add to the stable of young talent they have acquired. A changing of the guard at goalie in Carolina will soon be inevitable, with the only question being who will take the place of Ward.

Petr Mrazek is another young goalie that has distinguished himself in the NHL. At 24, he is eight years younger than the other Detroit Red Wings goalie, Jimmy Howard. Mrazek has worked hard to wrestle the starting job from Howard. Now, with a new contract and the starting job, Mrazek must prove he is the man in Detroit. Helene St. James wrote recently at freep.com that the Wings want Mrazek to show consistency and durability. St. James noted,

The Wings have Mrazek pegged as their goaltender of the future, but the sides differed enough in their evaluation of Mrazek’s value that the Wings filed for arbitration (a settlement was reached on the day of the hearing). There are concerns about Mrazek’s durability and consistency, to which the Wings hope he delivers reassuring answers next season.

While Mrazek has proved himself at the NHL level, Howard is lurking, hoping that the changing of the guard in Detroit is not etched in stone. Ansar Khan at mlive.com wrote that, “Howard will start the season as Petr Mrazek’s backup and the club is forced to commit $9.3 million in cap space to goaltending. But Howard also gives the Red Wings a proven, experienced backup as an insurance policy in case Mrazek is injured or falters, like he did after the All-Star break.”

you r correct. Always liked him more than Howard. Howard is good, bit not outstanding. If healthy, Mrazek could b a star

There are others to mention, but clearly Murray and Jones are at the top. If they can both avoid a slump in their seasons after getting to the Cup Finals, the changing of the guard at goalie in Pittsburgh and San Jose will be complete. The jury is still out on Mrazek, but he has what it takes and perhaps the lurking Howard will be what he needs to bring consistency to his game.

Some teams are still banking on what has been proven greatness, such as the Kings and Quick. Some, like the ‘Canes will soon realize their need to find their goalie of the future. But, whether a team has a veteran or the latest hot-hand, the future of goaltending in the NHL is bright.