This 2009 release told the story of the most monumental trade in hockey history and perhaps all of sports history. Stephen Brunt captures the essence of the background of the trade, the trade itself and the aftermath in a way that only one of Canada’s finest sports journalists could accomplish. 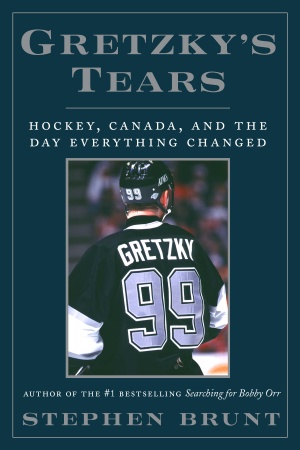 Brunt intends the book to be a sequel to Searching For Bobby Orr, which remains my favourite sports book to date. Although the author’s unique take on events is somewhat seamless in the two books, the only other similarity is the fact that the main characters of both books failed to directly contribute to the end product. Those, of course, being Bobby Orr and Wayne Gretzky.

Brunt eloquently highlights the life and times of McNall and Pocklington. He explains the ramifications this trade eventually had on cities like Winnipeg (fitting that Brunt was the very first to break the story of the Jets return), Quebec City, Anaheim, San Jose, Nashville, Phoenix, Tampa Bay, and Sunrise, Florida (Miami/Fort Lauderdale).

Even a city like Calgary reaped the benefit. Not to take anything away from the dominant team they were in 1989, having a Gretzky-less and shell-shocked Oiler squad didn’t hurt their chance on their road to hoisting Lord Stanley’s Cup.

And though it was not a trade deadline deal, anytime one speculates about potential blockbuster deals (as Rick Nash’s name gets feverishly tossed around), how can you not reflect back on the most colossal of all hockey deals.

The summer of 1988. The year of the trade. The trade that changed everything. The trade that forever on end will make fans and journalists realize that no trade is impossible and no player is untouchable – unless, of course, that player has a no trade/movement clause. Even then, clauses are made to be waived – when the right situation presents itself.

From Random House (the publisher):

Renowned sportswriter Stephen Brunt reveals how “the Great One,” who was bought and sold more than once, decided that the comfortable Canadian city where hockey ruled couldn’t compete with the slushy ice of a California franchise.

Bobby Orr’s career ended prematurely, with tears. Wayne Gretzky’s tears, unlike Orr’s, announced not an ending but another beginning. Gretzky’s Edmonton Oilers had four Stanley Cup victories, but Gretzky may then have had other goals in mind.

Beginning with his dad, Walter, and continuing with Nelson Skalbania, Peter Pocklington, Bruce McNall, Jerry Buss — and with the CBC’s Peter Gzowski as chronicler for the eager masses — the enormity of Gretzky’s talent attracted all sorts of people who were after a variety of vicarious thrills.

We all know the components of the deal now, but to jog one’s memory, on August 9th, 1988, the Oilers traded Gretzky, Marty McSorley and Mike Krushelnyski to the Kings in exchange for Jimmy Carson, Martin Gélinas, three first round draft picks in 1989, 1991 and 1993 and $15 million. Ultimately, Edmonton would use those selections to pick Nick Stajduhar, Jason Miller and Martin Rucinsky, respectively.

Inevitably, several of these pieces of the trade on would, in turn, be involved in transactions. A few years ago, Daniel Tolensky followed the timeline of all elements of the Gretzky trade, reviewing all the pieces that came in from the subsequent transactions involving the original players and picks. This article is well worth the read. An excerpt:

-Gretzky spent 8 years with the Kings (539 GP, 246 G, 918 PTS)
-Traded to St. Louis by LA Kings for Craig Johnson, Patrice Tardif, Roman Vopat, St. Louis 5th round choice (Peter Hogan) in 1996 Entry Draft and 1st round choice (Matt Zultek) in 1997 Entry Draft, February 27, 1996.
-Tardif was signed as a free agent by Buffalo, September 9, 1997
-Vopat was traded to Colorado by Los Angeles with Los Angeles’ 6th round choice (later traded to Chicago, later traded to Ottawa – Ottawa selected Martin Prusek) in 1999 Entry Draft for Eric Lacroix, October 29, 1998.
-Lacroix was traded to NY Rangers by LA Kings for Sean Pronger, February 12, 1999.
-Pronger was signed as a free agent by Boston, August 25, 1999.
-Matt Zultek re-entered the draft (unsigned by LA) and was selected in the 2nd round of the 1999 draft by Boston
-Peter Hogan split the season between Cleveland and Utah in the AHL and Florida and Richmond in the ECHL
-Craig Johnson was signed as a free agent by Anaheim, September 9, 2003

In an interesting take on which team won the deal, Arctic Ice Hockey claims the trade was, in hindsight, a fairly even deal:

Both teams walked away winners that day.  The Los Angeles Kings, and California hockey in general, enjoyed a boom under Wayne Gretzky, the likes of which they surely wouldn’t have enjoyed with Jimmy Carson, Martin Gelinas and Martin Rucinsky.  And imagine how great a deal it would have been for the Oilers if they had gotten Luc Robitaille instead of Jimmy Carson, or if they had drafted Saku Koivu or Todd Bertuzzi instead of Nick Stajduhar, or had perhaps gotten a better prospect than Corey Foster from New Jersey for L.A’s first choice in 1989.  Even with their relatively average luck, the Oilers still walked away with assets that would ultimately prove to be equivalent in value.

Brunt did provide updates on McNall, Pocklington and somewhat spoke of Jimmy Carson, but what ever happened to other elements of the infamous trade? Here’s a glimpse at some of the key personnel involved:

The following teasers are a sampling highlighting some of the hockey facts and items that the author presented that resonated with me.  If you’d prefer to discover them for yourself, skip over this section for now, bookmark this article, and come back and share your thoughts after reading.