It’s both a blessing and a curse to welcome the 2015 edition of the IIHF World Junior Hockey Championships back to Montreal.

It’s a blessing because Montrealers haven’t been treated to the annual December tournament featuring the best and brightest NHL prospects since 1978, when Canada won bronze and a young Wayne Gretzky had 17 points in 6 games.  (Interestingly, Gretzky’s 17 points was only 1 more than the second highest scorer and by no means a blowout by tournament standards).

At the same time, it has to be somewhat a curse for the young Montreal Canadiens prospects who already have the weight of a nation on their shoulders but now have the added pressure of representing the CH, arguably the most recognized logo in professional hockey with the largest fan base, in the team’s home arena, at least for part of the tournament which is shared with Toronto. 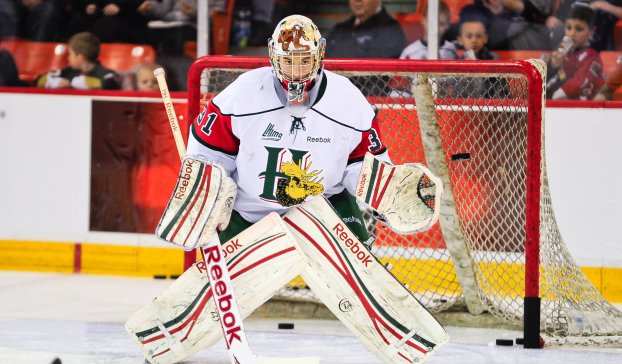 Of course, some players thrive under pressure while others falter.  Each of the Habs prospects are returning to the international spotlight and have felt this burden before.  But depending on the country for which they play or the expectations already harbored, some will be expected to shine while others will be pleasant reminders that the Habs future is in good hands.

Here are the four notable Habs prospects that will be in the fish bowl, for better or worse, when the World Junior Tournament kicks off on Boxing Day:

What a difference a year makes. At this time last year, Reway was tearing up the QMJHL  and Habs fans were clamoring to get a glimpse of the scoring sensation as he suited up for Team Slovakia at the 2014 WJC.

This season, Reway will be an after thought for many fans who might have forgotten his name.  He parted ways with the QMJHL Gatineau Olympiques to join HC Sparta Praha in the Czech Republic on a two-year contract and did not participate in this summer’s Habs rookie camp.

The Montreal Canadiens have his rights until June 1st, 2017 so there is still pressure on Reway to perform, even if he chose the unfavourable side route to the NHL.  Pundits are excited about the 19 year old, whose creativity, speed and smooth hands make him a top-tier prospect, despite his 5’9″ frame.   Even as one of the youngest, and probably smallest members of Sparta Praha, he has 21 points in 23 games and ranks 2nd in team scoring.

Slovakia isn’t a contender, which takes some of the pressure off Reway to impress his would-be NHL home.  They finished 8th in 2014 but had three players rank in the top ten in scoring, more than any other team.  Reway, with 4 goals and 10 points in 5 games finished 5th overall in scoring.  Here are his 2014 WJC highlights:

All eyes will be on the captain of Team Finland, Artturi Lehkonen as he attempts to defend Finland’s 2014 Wold Junior Hockey Championship title.

Lehkonen, though listed at 5’11” and 161 lbs is also a standout among Habs rookies.  He has been a staple on the Finnish national team since 2010-2011 and is preparing for his third WJC.  He is a former rookie of the year in Finland’s SM-Liiga and is now dominating Frolunda HC in the Swedish Hockey League, where he is the youngest player to crack the top 10 in scoring.

Some Habs fans might have forgotten his name since a virus prevented Lehkonen from participating in the Habs development camp.  He has also suffered two concussions in his young career, which makes his health a legitimate concern.  Still, the 19 year old has the admiration of many fans and pundits, thanks to his international play and more specifically his ability to put the puck in the net without sacrificing the defensive side of his game.  He was a large part of Finland’s success in 2014.  Here are his highlights:

Jacob de la Rose is another alum returning to the WJC in 2015.  Team Sweden is one of the powerhouses of junior hockey with two silver medals and a gold in the last three years.  In 2014, an overtime loss to Finland left the host nation with a silver medal and de la Rose is returning for his third WJC to try to win back gold.

Added to the expectations of his home country are the countless Habs fans who have been talking about de la Rose’s exceptional training camp with the big club.  He outlasted more notable, and older, top prospects and was the final player to be cut before the season got underway.

Most fans can’t help but be excited about de la Rose’s size.  At 6’3″ and 190 lbs he is a towering center with a physical presence.  Added to that is his pedigree and talent.  De la Rose has played professional hockey since he was 16 in Sweden’s most competitive league and has finally made the jump to North America.  It hasn’t been a smooth transition (5 pts in 27 games) but his strong skating and willingness to play a hard-nosed game, coupled with his special teams play, has endeared him to fans who will be buying tickets to see the only Habs prospect in the tournament with a chance of making the team next season.

Jacob de la Rose might have been a slightly higher draft pick than Zachary Fucale, but few players will be under more scrutiny than Fucale when Canada takes to the Bell Centre ice.

Fucale getting the crowd going early. What a save. #Canada #WorldJuniors https://t.co/lixWU7pDD4

First, he’s a goaltender and a good one.  He has a Memorial Cup to his credit and was Team Canada’s starting goaltender at the 2014 WJC.  The media has already reported Fucale will likely start in nets again this year as Canada looks to medal for the first time since  2012.

Second, fans and pundits are undecided on the young goaltender who hasn’t lived up to expectations at times because of his low save averages.  Still, most agree no one works harder than Fucale and there is plenty of time for him to grow into an NHL calibre player, especially since the role will be filled in Montreal for some time to come.

Third, Fucale will be playing in nets for Team Canada as a Hab prospect.  If that wasn’t enough to draw comparisons to current Canadiens goaltender Carey Price, whose performance during the 2007 WJC is legendary, there is also their mutual calm demeanor and poise between the pipes.  Price became Canada’s goaltender after he brought home the gold medal from the Sochi Olympics.  Canadians will be hoping for a similar hero at the World Juniors, a tournament where Canada has had less success in recent years. \

Finally, Fucale is a Laval native.  The Montrealers that will inevitably pack the Bell Centre are his hometown fans.  He will have friends and family in abundance which I’m sure will be welcome but the pressure for this 19 year goaltender to perform in his final World Junior tournament is off the charts.