Skip to content
When Hockey Canada announced their roster for the IIHF World Under-20 Championships (also known as the World Juniors) they had only named two goalies: incumbent Zachary Fucale and challenger Eric Comrie.  This meant that rather than bringing in 3-4 goalies to camp and having them fight for the two positions, Hockey Canada would have already set the goaltender roster and all that was to be determined was who would start in net.

Pundits would have easily guessed before the tournament that the starting position would have been given to Fucale and it would have been his to lose to Eric Comrie.  This appears to be what will happen as it was announced that Fucale was given the start in Canada’s first game on Boxing Day.

While some people have been quoted as saying that Fucale “knows how to win” – this is absurd from an analytics perspective.  Fucale is not the best goalie in his league let alone one of the best Under-20 Canadian goaltenders and there are plenty of arguments for others to be on the team.  But with the roster set, changes of this magnitude are unlikely to happen now.  With that being said Eric Comrie has proven himself to be the much better goaltender of the two and should be the one given the starting position at the World Juniors.

Analyzing goaltenders is one of the areas with the least amount of research within the analytics field.  The general train of thought is that goaltenders are complete voodoo and that in short sample sizes (such as the 5-7 games of the World Juniors tournament) random variance can be all over the place.  A replacement level goalie can look elite while an elite goalie can ruin his perception within this sample size.  That being said analytics have developed some tools to help analyze goalies. 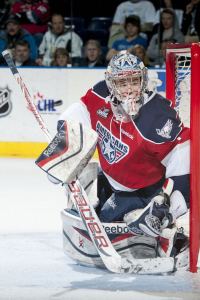 We don’t use statistics such as “Wins” and Goals-Against Average.  Despite their repeated citation in main-stream media these statistics are often controlled by factors outside of a goalies job.  For that reason they have little value to us.

Eric Comrie and Zachary Fucale are of the same height and similar age.  Comrie is the smaller of the goalies in weight but this does not seem to affect his performance.  Comrie was drafted in the 2nd round of the 2013 NHL Entry Draft to the Winnipeg Jets.  He currently plays for Tri-Cities in the Western Hockey League, one of the weaker teams in the league.  Drafted 15 positions head of him in the same year, Fucale currently belongs to the Montreal Canadians and plays with the Halifax Moosehead of the QMJHL, an average performing team.

Save Percentage is one of the best statistics we currently have for goalies.  There are some nuances within the statistic but a goaltenders main job is to stop the shots he is faced with.  A goaltender who can stop a lot of shots over a long period are typically the ones who are considered elite.  Even-Strength Save-Percentage is even better but we do not have this level of detail in the CHL.

Between these two goaltenders Eric Comrie has the much better raw save percentage compared to Zack Fucale by over 3%.  3% in the NHL is a huge gap, for your average starter is the difference of 46 goals which translates to about 7 wins (or 14 points in the standings).

Another way to compare the save percentage of a goalie within a distribution is to look at the z-score of the goalies.  This compares how far away the goalie’s save percentage is from the league median taking into account the standard deviation.  Zack Fucale appears to be nothing more than median goaltending talent in the QMJHL while Comrie is the second best goaltender in the WHL only behind Tristan Jarry.

Quality Starts (QS) are one of my favourite advanced statistics and they work along side Really-Bad Starts (RBS) and Bail-Outs (BOs).  A quality start looks at how often a goalie gives his team the best chance to win.  In the NHL if a goaltender has performed at least league average in a game, or better than a replacement level goalie while allowing 2 goals or less, they are credited with a Quality Start.  A goaltender who is not able to post a .850 in a game then they are credited with a Really-Bad Start while if a team does not have a Quality Start but the team still wins, it’s considered a bail-out.  We can adjust the numbers on these statistics to reflect their respective leagues.

It’s clear to see that the Comrie has posted many more quality starts than Fucale.  What does work in Fucale’s favour is that Comrie has managed to post more really bad starts while having been bailed out a few times.  At best we can say that Fucale is a consistently average goalie.

If Canada wishes to win the World Juniors, having gone four years without a gold medal, the country should be giving their team the best chance of winning.  The best chance of winning starts in net and to do that Canada should be playing the best goaltenders from the get-go.  Comrie has demonstrated that he is by far the better goalie of the two within their respective leagues.  Comrie is considered elite talent within the WHL while Fucale has demonstrated to be an average goalie.

These statistics don’t apply just to the small sample size of the current season.  The past years have followed similar trends with Fucale being an average goaltender while Canada has passed on better goaltending talent.  Hopefully this year, should Canada continue with Fucale again, they do not see similar results (again).

4 thoughts on “Team Canada Goalies: In Argument of Comrie”