The 2016-17 Edmonton Oilers have utilized a very unusual deployment of their toughest players—especially compared to other teams in franchise history.

Whether you like the term or not, one of the Oilers’ calling cards this season has been their “functional toughness”. Before we go any further, we should try to define that. Of course, hockey people have various definitions of “toughness”, ranging from physicality to the ability to withstand pain to resiliency.

But if we are to be brutally honest here, what we are usually talking about in hockey circles is the willingness and ability to fight. When you think about it, the only reason the term “functional toughness” was even coined was to differentiate between two types of players that will drop the gloves—the ones that play regularly and those that see limited action.

Getting back to the Oilers, a look at their roster and some numbers from this past regular season raise some interesting questions. When was the last time an Oilers forward who finished in the top six in team scoring also led the team in fights? How many times have the Oilers had two players among their top six scorers responsible for so many of their fights? Have the Oilers ever had a season where they finished in the top five in fighting majors and the team’s three busiest fighters all played on the top three lines?

There are a few ways to examine the “functional” side of the equation over Oilers’ history, including ice time estimates. Another one involves looking at the average offensive contribution of the players who have handled the rough stuff. Because we are comparing players who have played over a span of 38 seasons, a helpful tool (but certainly not the only method) is the era adjustment Hockey-Reference.com makes to players’ point totals.

The table below is made up of the 10 Oilers teams that had the highest average points per game from their fighters, adjusted for the number of times individual players fought in a season. 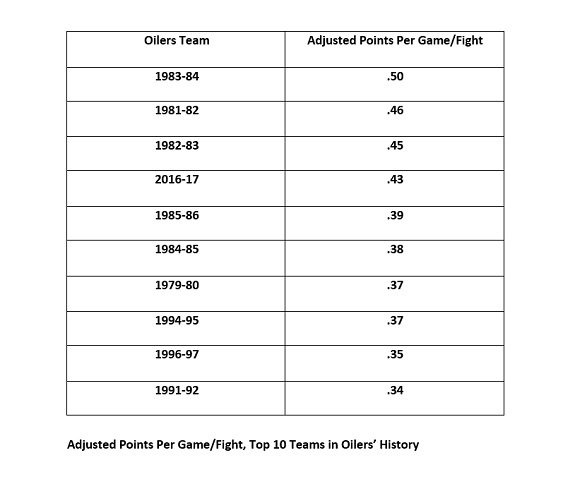 Before we go any further, we can already see this season’s edition of the Oilers is quite rare. The last time the Oilers received the kind of offensive contribution they got from their fighters this past season was in 1983-84. In fact, that 1983-84 team finished first in this category—mainly due to the fact a young Mark Messier was still dropping the gloves with some regularity and because their busiest fighter that season, Kevin McClelland, was putting up some points on the third line.

(As an aside, how many of you recall that McClelland was a third-line centre on some of those Cup-winning teams in the 1980s—a right-shooting centre, no less?) Other teams that made this list include some Oilers squads from the 1990s, which isn’t a surprise, given that some of those teams had the likes of Dave Manson, Shayne Corson and Scott Mellanby.

Tough Players Who Play Above the 4th Line

So we have an idea of which Oilers teams got the most offence from the players doing the fighting, but not the number of “functionally tough” players in any of these seasons or the kind of toughness those players provided. In my view, one of the things we want to know is how many players who weren’t primarily on the fourth line or the third pairing dropped the gloves at least a few times in a given season.

This is a bit of a crude and arbitrary approach, but what follows is the number of players from each of the above Oilers teams who finished in the top 13 in team scoring (either by raw points or points per game) and who had at least three fights. 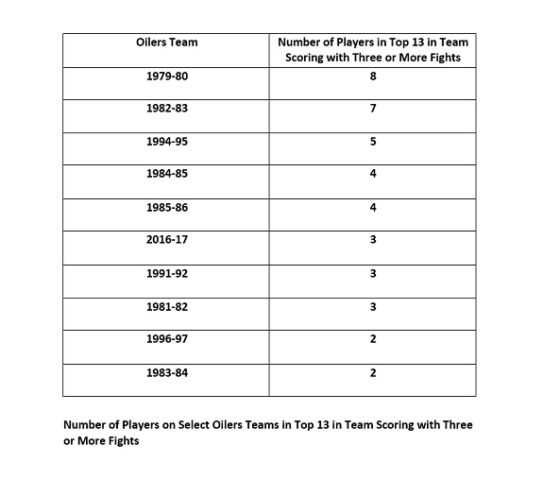 If this is a method you put stock in, then the 2016-17 Oilers rank on the low end among the 10 teams that rated highly in the previous metric.  Some of those Oilers teams of the early 1980s really knew how to spread the fighting chore around. The problem here is we still don’t know how these groups of players compare in terms of relative toughness.

Now if you subscribe to the belief that fighting ability is what we are referring to in terms of toughness, we need some way to attempt to measure that. While this is quite subjective and hardly scientific, hockeyfights.com and dropyourgloves.com have each come up with “Top 10” lists of the toughest fighters from almost every season the Oilers have been in the NHL. It is worth noting that over the last five seasons both sites kept lists, they were usually between 80-90 percent in agreement (at least in composition, if not in order of the fighters’ ranking).

These sites also track “fight cards”, so we can see how many of the past and present Oilers from teams we have previously identified ended up fighting players on these lists. Another method would be to track how many times they fought someone in the top 10, as well as anyone any of those 10 players fought. However, the first approach should suffice. Oilers teams listed below are in order of the number of times their top 13/three-fight players took on a top-10 fighter in that given season. 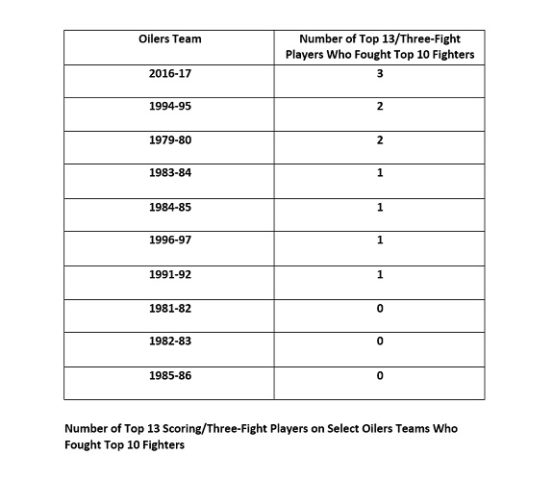 This is where the 2016-17 Oilers really separate themselves from the other teams. The 1979-80 and 1982-83 teams had a combined 15 players who racked up at least three fighting majors while avoiding fourth-line/third-pairing duty. But only two of those 15 tangled with someone hockeyfights.com identified as among the NHL’s toughest in either season.

Meanwhile, all three of the 2016-17 Oilers who fit the top-13/three-fight criteria (Milan Lucic, Patrick Maroon and Zack Kassian) managed to take on a player in this season’s top-10 list. In fact, they are the only Oilers’ team in history with that distinction.

Furthermore, Lucic and Maroon are the only combination in franchise history to finish a season in the top six in team scoring and to be recognized as top-10 fighters. In fact, you have to go back to the days of the Islanders’ Clark Gillies and Bob Nystrom to find the last time any two teammates in the NHL finished that high in team scoring and made one of these toughest fighters lists. (Technically, Gillies and Nystrom never accomplished both in the same season, but they were both repeatedly on these lists and among the Isles’ top scorers in the late 1970’s and early 1980s.)

Lucic and Maroon are not Gillies and Nystrom, but it is stats like these that underscore part of the uniqueness of the 2016-17 Oilers.

A Look at Fighting Trends in Today’s NHL

Of course, some will argue that the only reason Lucic and Maroon were in this position this past season was due largely to the recent exodus of the “super heavyweights” in the league. Without question, NHLers on the fourth line— especially those whose job description includes fighting—average much more ice time than they did even five years ago. However, that doesn’t explain why we don’t see many more Lucics and Maroons. We need more context to understand just how unusual their past season was in team and league history.

For starters, fighting major leaders on 23 of the 30 teams in 2016-17 played on the fourth line or the third pairing.  So even with the decrease in fighting and the elimination of some of the more one-dimensional fighters, fighting in the NHL today is still very much the domain of players with the least amount of ice time. This season’s Oilers were one of only seven teams to buck that trend.

If we were to go back to the Oilers’ first season of 1979-80 and glance at the toughest fighter and frequent fighter lists, we would still see a large gap between how functional the toughness was in those days compared to even this season. It is no secret that fighters back then contributed more to their teams than they have in recent decades, but we are still a long way off from returning to that.  During the 1979-80 season, the top 10 toughest fighters (according to hockeyfights.com) averaged .38 adjusted points per game, while the 10 most frequent fighters averaged .45 adjusted PPG.

Interestingly, the range of adjusted PPG of players on those lists was .07 to .73.  This past season, it was .04 to .67 PPG—but if we remove Maroon’s and Lucic’s numbers, the range drops to .04 to .31.  Furthermore, the average adjusted PPGs of the players on the toughest fighters and frequent fighters lists in 2016-17 were .16 and .18, respectively, when we leave out Maroon’s and Lucic’s stats. Clearly, their player type is much rarer relative to the rest of the league than it was in the days of Gillies and Nystrom.

Making Their Mark in Oilers’ History

Getting back to the questions posed earlier, 1996-97 was the last season an Oiler (Kelly Buchberger) led the team in fights and finished in the top six in team scoring. Also, there has never been a season before this past campaign where two players in the Oilers’ top six had such a large percentage (43 percent) of the team’s fighting majors.

And, no—the Oilers have never had a season prior to this one when three forwards in their top nine were 1-2-3 in fights in a year when the team finished in the top five in fighting majors. The closest season was 1981-82 when Paul Coffey, Dave Lumley and captain Lee Fogolin shared the team lead in scraps with Dave Semenko. However, the Oilers as a team were also second-to-last in fights that season.

Of course, all of this is just one way to attempt to define functional toughness. We haven’t mentioned the 2005-06 squad, which included the likes of Georges Laraque, Raffi Torres, Chris Pronger, Jason Smith, Matt Greene, Ethan Moreau, Steve Staios and a host of other gritty players. That team didn’t perform well in what we’ve done here, but Torres and Pronger, for example, also finished in the top six in team scoring that season.

Aside from Messier, we would be hard-pressed to identify two meaner Oilers in franchise history. Plus, surely we can call a team that fell one win short of a Stanley Cup championship “functional.”  The bottom line is there are several ways to define functional toughness. But if your definition relies on relative scoring and fighting prowess, the 2016-17 Oilers do not appear to have an equal in franchise history.

Kelly is one of the newest members of The Hockey Writers team. He has been a fan of the Edmonton Oilers since 1983, and is now covering his favorite NHL club for THW as a contributor. Kelly has written extensively about Canadian Junior A hockey, particularly the Saskatchewan Junior Hockey League. He is the long-time news director of Saskatchewan’s Aboriginal radio network, Missinipi Broadcasting Corporation (MBC Network Radio).