Twenty years ago, during Flyers’ legend Ron Hextall’s second stint with the team, the Flyers advanced to the Stanley Cup Finals but were swept by the Detroit Red Wings. Hextall’s shaky playoff performance that year marked the beginning of the Flyers’ now two-decade-long search for a franchise goalie.

The Flyers have tried it all: drafting highly touted prospects, signing veteran All Stars, going after big-name free agents, trading for a guy who maybe just needs a change of scenery, picking up an undrafted free agent – all to no avail. With the Flyers’ goalie situation as unclear as it’s ever been, here’s a look at three of those attempts—riding a rookie sensation, bringing up an unheralded prospect and a blockbuster signing—and how they failed.

Flyers fans may best remember Brian Boucher for his role in the 2010 Cinderella Cup run, but 10 years before that, fans believed that he was the next great Flyers goalie.

The Flyers used their first-round pick in the 1995 NHL Entry Draft on Boucher, hoping to develop him into Hextall’s eventual replacement. It was the first time that the organization had used a first-rounder on a goalie. Boucher was surprised to go so early, but NHL Central Scouting had him among the top three North American goalies entering the draft that year. Despite all that, Boucher displayed the humility that has come to typify professional hockey players.

“I’m very proud that I went this high,” Boucher said in a phone hookup to Edmonton, “but I realize it’s just one step to the NHL…Whatever I do from here on out will determine if I’ll be an NHL player.” (Gary R. Blockus, The Morning Call)

After taking the Phantoms to the Eastern Conference Finals in 1999, the Flyers called him up to be the backup behind John Vanbiesbrouck (one of the aforementioned veteran all-stars) for the 1999-00 NHL season.

Boucher Gets the Nod

Vanbiesbrouck, meanwhile, was coming off a season like that of so many other Flyers goalies: solid regular-season numbers followed by inconsistent play in the postseason. Unfortunately, his struggles continued into the 1999-00 season. He played in nine of Flyers’ first 10 games and lost his first five. On top of that, coach Roger Neilson was diagnosed with cancer later in the season, and Eric Lindros missed significant time due to concussions. As the team entered the new millennium, Boucher seemed to be emerging as the Flyers’ messiah.

Boucher began playing more games and eventually established himself as the number-one goalie. From the All-Star Game through the end of the season, Boucher won 12 of 18 games. He finished with an overall record of 20-10-3, a .918 save percentage and a league-best 1.91 GAA.

Boucher maintained that level of play during the Flyers’ run to the Eastern Conference Finals against New Jersey. That run included the five-overtime win against Pittsburgh and Boucher’s famous save against Patrik Elias.

Of course, the Flyers eventually blew a three-games-to-one lead and lost that series. The problem was scoring, however, not goaltending, and fans looked forward to seeing Boucher improve in his second year.

Shortly into the next season, it became apparent that Boucher wasn’t going to meet fans’ lofty expectations. He went 3-4-3 in his first 10 games and eventually lost the starting position to first-year NHLer Roman Cechmanek. Boucher was traded in June 2002.

Fans love Boucher. As a rookie, he brought the Flyers within a win of the Stanley Cup Finals in 2000, and he was a key part of the Flyers’ improbable 2010 postseason. Ultimately, however, the first-round pick fell short of expectations and wasn’t able to being the Stanley Cup back to Philadelphia.

The goalie who was next in line after Boucher is also next on our list: Roman Cechmanek. Looking at his numbers with Philadelphia—he went 92-43-22, and his .923 save percentage and 1.96 are team records—you might wonder why on Earth the team ever let him go. But those who saw him play for the Flyers remember him as one of the Flyers’ greatest choke artists. That’s the enigma that was Roman Cechmanek.

From Unknown to Elite

Cechmanek had tons of experience playing in Europe, but he was far from a household name in North America. He was 29 when the Flyers picked him up in the sixth round  of the 2000 NHL Entry Draft (and traded Vanbiesbrouck).

As the 2000-01 season approached, the Flyers chose Cechmanek as a backup instead of the inexperienced Maxime Ouellet, the Flyers’ first pick in the previous draft. Boucher got off to a poor start and never recovered. The unheralded Cechmanek came out of nowhere to claim the number-one spot by November. He played in 59 games that year, winning 35. His 10 shutouts were second only to fellow Czech Dominik Hasek’s 11, and he also finished second to Hasek in Vezina Trophy voting. His outstanding play—especially his numerous head saves, dubbed “cranium caroms”—led many fans to believe that the Flyers had found their next franchise goalie.

But alas, playoff pressure would claim another victim. The Flyers drew a matchup with the Buffalo Sabres, led by Hasek. Hasek seriously outplayed Cechmanek, who posted a 3.12 GAA and a .891 save percentage. In his last game of the series, Cechmanek let in five goals on nine shots before being pulled. Soft playoff goals would come to define Cechmanek’s career in Philadelphia.

He put up similar regular-season numbers in 2001-02, and the team finished second in the Eastern Conference. But unlike the year before, he played extremely well in the playoffs, putting up a 1.85 GAA and a gaudy .936 save percentage. The offense, however, managed to generate only two goals throughout the five-game series against seventh-seed Ottawa. At one point in Game 4, Cechmanek yelled at the Flyers bench from center ice, begging for some goal support. It was for not, however, as the Flyers lost in the first round again.

He played well throughout the 2002-03 season (33 wins, 1.83 GAA, .925 save percentage), but his postseason performance was as inconsistent as ever. In the second round, he recorded two shutouts as the Flyers and Senators split the first four games. Then he let up five goals in each of the next two games, and the Flyers were eliminated. He was traded to Los Angeles that spring and played a season there before returning to the Czech Republic.

The Flyers may not have expected much from Cechmanek when they drafted him, but his unbelievable regular-season play had fans hoping that the Flyers had found their answer to the likes of Dominik Hasek and Martin Brodeur. Unfortunately, the spotlight seemed to be too much for him, and the team was where it started just a few years later.

Ilya Bryzgalov failed more spectacularly than any other goalie in Flyers history—and that’s saying something.

Following Cechmanek’s final season in Philadelphia, the Flyers saw largely mediocre goalie play. Guys like Robert Esche, Antero Niittymaki and Martin Biron had the occasional good season, and the team made deep playoff runs in 2004 and 2008, but no one was able to sustain high-level play for long. These struggles came to the forefront in 2010, when the Flyers somehow made it to the Stanley Cup Finals despite switching goalies seemingly every other game, eventually losing on a notoriously soft overtime goal. The next year, undrafted rookie Sergei Bobrovsky played well, but the playoffs saw another carousel in goal. Three different goalies started, and the Flyers tied an NHL record with seven in-game changes. By the end of that season, the Flyers were the only team with zero shutouts in the regular season and playoffs.

So the Flyers decided to go shopping. On June 23, 2011, they traded captain Mike Richards and Jeff Carter, their best goal scorer, in two huge deals. Later that day, the team announced a deal with Ilya Bryzgalov, the most sought-after goalie in that year’s free-agent market. It was humongous big: nine years, $51 million.

If the huge contract gave Bryzgalov any self-confidence, it was gone by November: After a 9-8 loss to Winnipeg, he said, “I have zero confidence in myself right now. If you throw a ball instead of a puck, I’m not going to stop it. I’m terrible.… I’m lost in the woods right now.”

On top of being inconsistent, Bryzgalov was, well, weird. In HBO’s “24/7 Flyers Rangers: The Road to the NHL Winter Classic,” he went on about our place in the universe, the penalties for killing a tiger in China and how his dog is basically a beautiful woman.

In the first round of the playoffs, the Flyers took on the Penguins in one of the most memorable series of the teams’ rivalry. The Flyers won in six, and along the way, the teams combined for 56 goals and 312 penalty minutes. The Flyers won the first three games, but in Game 4, Bryzgalov allowed five goals on 18 shots before Peter Laviolette pulled him. He started Game 5 and lost, but he ended the series in Game 6, stopping 30 out of 31 shots. He played well enough to win Game 1 against New Jersey in the next series with a .885 save percentage, but the Flyers lost the next four.

Another lockout shortened the 2012-13 season, which turned out to be a godsend for the Flyers. Yes, they missed the playoffs for only the second time in the previous 19 years. Yes, Bryzgalov got off to an awful start. He lost the first three games and finished the 48-game season with just 19 wins and a .900 save percentage. The fans and the organization were ready to move on. Because of the lockout, they could – the new collective bargaining agreement allowed the Flyers to buy out two contracts. They dumped Bryzgalov and the seven years, $34.5 million left on his contract. That contract has to be the worst one the team has ever awarded. They were lucky to be able to get out of it so easily.

The Flyers missed the playoffs again in 2016-17. As the next season approaches, the Flyers face even more goalie questions than usual thanks to the upcoming expansion draft. 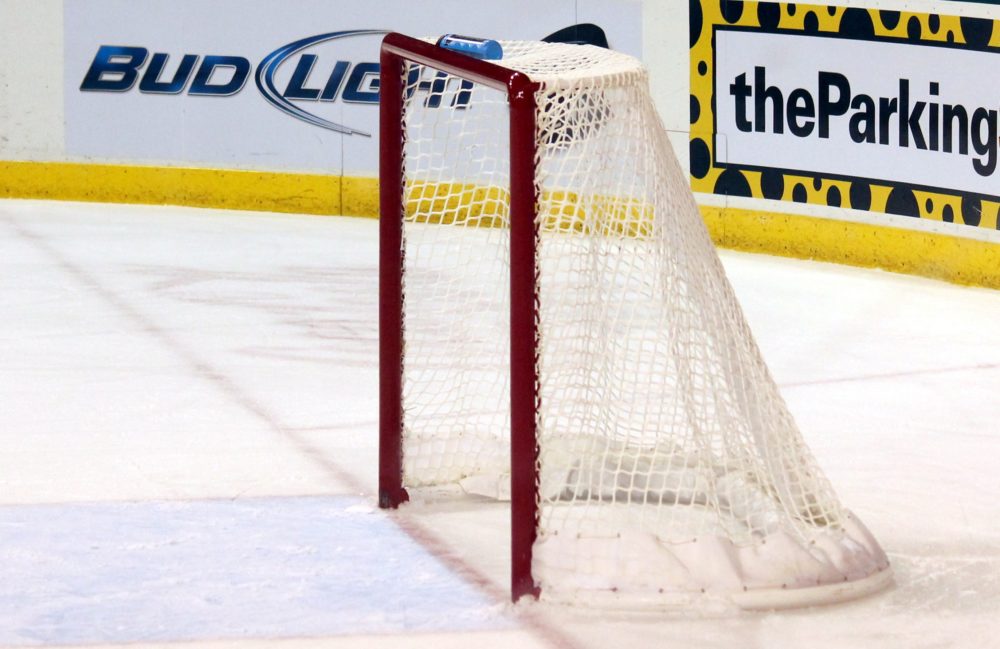 Whoever is between the pipes next season, he’ll have to shoulder the weight of over twenty years of frustration and disappointment. Can he handle it?