The Blackhawks like advanced stats such as Corsi ratings, etc. [Chicago Sun Times]

Brian Burke on the other hand, does not. [Pens Initiative]

Win or lose tonight, the Penguins still have a ton of problems that won’t go away. [Trib Live]

Apparently trading Evgeni Malkin might be the solution. [Pensburgh]

Henrik Lundqvist got fined for spraying Crosby with water, because apparently that’s the worst thing players can do to each other now. [CBC]

Who has the edge for tonight’s game 7 between Pittsburgh and New York? [NHL.com]

Are the Canadiens that good, or are the Bruins underachieving? [Boston.com] 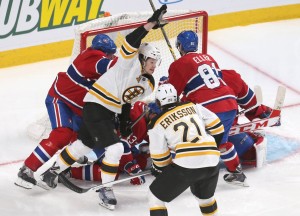 Expect a physical game between the Habs and Bruins on Wednesday. [Five Thirty Eight Sports]

Or how about Phaneuf to the Oilers? [Vavel]

It could work. Probably not though. [Oil on Whyte]

Devante Smith-Pelly is making his presence known for the Ducks. [Click2Houston]

And finally, the wonder that is Teemu Selanne. [ESPN]