The Amazing Spider-Man 2 opened in theatres recently, and with it comes the hype of the next chapter of the Spider-Man franchise, which will feature The Sinister Six. It also reminded me when the NHL tried the Guardian Project. A project combined with Stan Lee, the creator of Spider-Man, the NHL attempted to use each team’s nickname as a Marvel Comic superhero. It received mixed reviews at best.

What ever happened the to the NHL’s Guardian Project? Did any of those super hero’s have the ability to break locks?

First Guardian Project and now Clay Aiken singing anthem at All Star Game – does #NHL actually look at its fan base and who attend games? — Dennis Bernstein (@DennisTFP) January 24, 2011

Still, the idea got me thinking. Which NHL players, present and past, would comprise The Sinister Six of the NHL? After all, there are plenty of villains that dot the NHL landscape. From thuggish goons to annoying agitators, hockey has a way of bringing out the dark side of its players.

So without further adieu, here are the players along with their counterparts from Spider-Man’s rogues gallery, that make up the Sinister Six of the NHL. 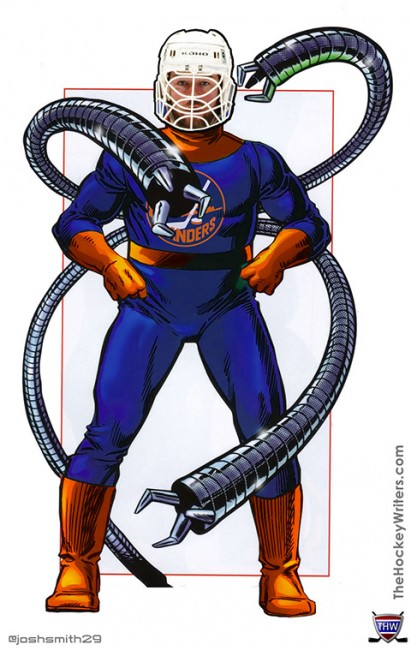 The legendary New York Islander is remembered for being one of the best clutch goalies in NHL history. He’s also remembered for using his goal stick to clear out opposing forwards.

There was no better example of Smith’s hatchet work than in the 1983 Stanley Cup Finals.

In Game 2 against the Edmonton Oilers, Smith swung his stick at Wayne Gretzky, catching the Great One on the hip with his stick. Gretzky crumpled to the ice, while Smith glared menacingly at Edmonton’s hero. It was villainy at its finest.

Slasher Smith’s use of his goal stick is similar to how Doctor Octopus uses his extra arms. Doc Ock was especially keen on using his elongated arms, at swiping away Spider-Man’s webs. Those arms also came in handy to knock Spidey off his feet, during the intense battles between the two rivals. 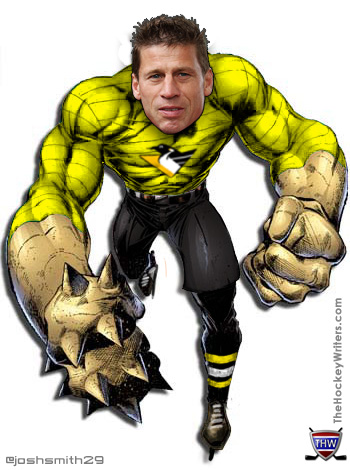 The hard-hitting defenceman spent 16 seasons in the NHL, playing for five different teams. The Swedish rearguard was best known during his tenure with the Pittsburgh Penguins, and was a key member of back-to-back Stanley Cup championships with the Pens in 1991 and 1992.

Samuelsson’s name lives in infamy, thanks to his knee-on-knee hit on Cam Neely during the 1991 Wales Conference Finals. Samuelsson wasn’t afraid to submarine his innocent victims, leaving them writhing in pain.

The Sandman is also known to go low on his intended prey. Sliding underneath the surface, the Sandman will strike from out of nowhere to send Spider-Man flying out of control. His mass and strength help him shift shape and mold weapons like a sledgehammer. Samuelsson also used his mass and strength to the best of his abilities. When Samuelsson hit someone, it felt like getting struck with a sledgehammer.

Pronger is known for his large wingspan, and devious deeds. His penchant for stealing the game pucks in the 2010 Stanley Cup Final drew the ire of the Chicago Blackhawks, and their fans.

Just saw Chris Pronger in Winnipeg for the second time in three hours. It’s like he thinks I’ve got a puck he can steal or something.

He was known for crimes other than petty theft. His vicious hit from behind on Thomas Holmstrom in the 2007 Stanley Cup Playoffs, left the Red Wings star bleeding from the forehead. For that act of violence, Pronger was suspended for only one game.

Pronger’s violent ways continued in 2007, as he elbowed Dean McAmmond in the head during the 2007 Stanley Cup Finals. Once again, Pronger got off lightly as he was suspended for one game.

The Vulture is also known for petty crime, but will use violence if need be. His large wingspan gives him the ability to fly which terrorizes innocent citizens. He has posed major problems for Spider-Man and just like his hockey counterpart, Vulture usually doesn’t pay a heavy price for his criminal actions. 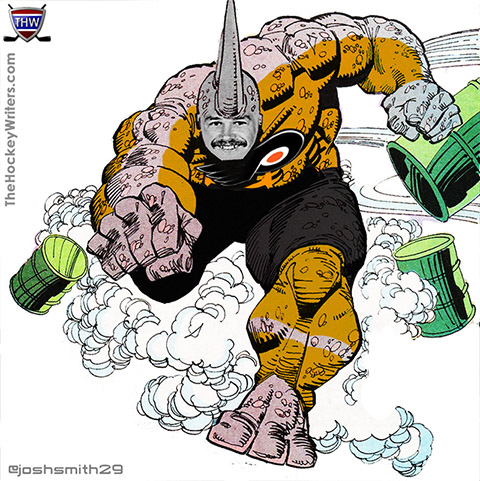 Dave Schultz is the most notorious goon in NHL history. The most famous member of the Broad Street Bullies, Schultz terrorized the NHL throughout the 1970s with his fists and brawn. Schultz took no prisoners and spared no mercy to anyone who dared get in his way. His scrap with Dale Rolfe of the New York Rangers in Game 7 of the 1974 Stanley Cup Semifinals is famous due to Schultz pulling hair and head butting the helpless Rolfe.

Like Schultz, Rhino has no regard for mere mortals. He will use excessive force in order to get what he wants. His strength and intimidation are a major source of concern for Spider-Man. Rhino will destroy everything and laugh at the damage he has caused. Like Schultz, Rhino was a bully in every sense of the word. 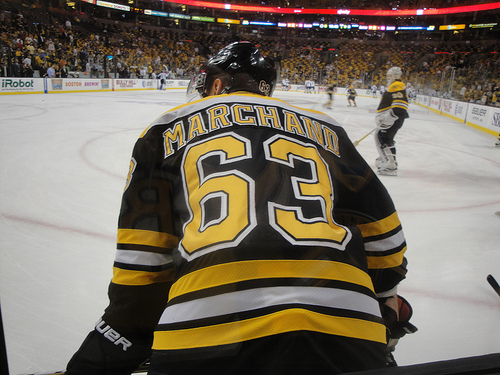 If there’s one thing that Brad Marchand specializes in, it’s getting under his opponents’ skin. The Boston Bruins pest is adept at driving the opposition crazy. Whether it be a jab of the stick, or saying unkind words, Marchand is an expert at distraction and devilish doings.

No better example of Marchand’s irritating presence than the 2011 Stanley Cup Finals against the Vancouver Canucks. Marchand drove the Canucks insane by using every dirty trick in the book, to provoke and prod the Canucks. His favourite targets were the Sedin twins who tried to turn the other cheek, but that just pushed Marchand further into goading the Twins into the abyss.

Venom survives by getting under the skin of its host, to form one of Spider-Man’s arch enemies. Venom’s alter ego, Eddie Brock is excellent at getting under the skin of Peter Parker, the alter ego o Spider-Man. Brock and Parker work for the Daily Bugle and they often compete for stories and photographs that make the front page. Brock is an antagonist to the nth degree and when he takes the role of Venom, he is the ultimate pest to Spider-Man.

Perhaps the most sinister villain in the NHL, Matt Cooke’s wrap sheet resembles a hardened criminal. Cooke has been suspended five times by the NHL for various infractions, such as hits to the head, hits from behind and knee-on-knee collisions.

However, his most notorious hit did not warrant a suspension but it forced the NHL to make a rule change. Cooke levelled Marc Savard of the Boston Bruins with a devastating open ice hit that saw Cooke’s shoulder catch Savard’s head. The hit forced Savard out of action for two months with a concussion and shortened his promising NHL career. The hit made Cooke public enemy number one in Boston and around the NHL.

The Green Goblin is Spider-Man’s most famous archenemy and with good reason. It was The Green Goblin that murdered Peter Parker’s first love, Gwen Stacy. Spider-Man swore revenge and avenged the death of his love by killing The Green Goblin. The Goblin is known for using various weapons like exploding jack-o’-lanterns and bats. Cooke will use his stick, elbow, knee and shoulder to lay out an opposing player.

Shocked to hear Matt Cooke say he didn’t intend to injure Tyson Barrie. I was fully expecting a defiant confession and maniacal laugh.

Matt Cooke currently plays for the Minnesota Wild, whose home uniforms are green. His most recent transgression, a knee-on-knee hit on Tyson Barrie saw the NHL hand Cooke a 7 game banishment. Barrie missed the rest of the playoffs as his Colorado Avalanche were eliminated by the Wild in the first round.

Special thanks to Josh Smith for the excellent photoshop work.

I share season tickets for the Winnipeg Jets since their return to the Manitoba capital in 2011. I have written about the Jets since 2011 on various sites.

2 thoughts on “The Sinister Six Of The NHL”