So what did Milan Lucic really say to Dale Weise in the handshake line? [Huffington Post]

Don Cherry thinks handshake gate is being exaggerated. What a shocker. [CBC]

Not sure why the Habs are whining about all this anyway. They got the last laugh by winning the series. [National Post] 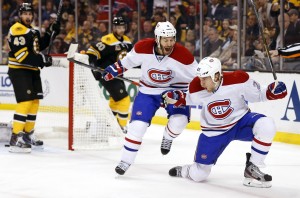 The New York Rangers plan to attend the funeral of Marty St.Louis’ mother as a team. They rallied around him to beat the Penguins. One wonders if that emotion will carry over to the conference finals. [USA Today]

The Habs/Rangers series was unexpected to be sure. So which team has the edge? [ESPN]

Apparently, John Tortorella was in favor of buying out Alex Burrows. [Sportsnet]

In a somewhat surprising turn of events, the Penguins announced they have fired GM Ray Shero, but Dan Bylsma is still the coach. [Pensburgh]

There has been a lot of blame to go around in Pittsburgh, and Sidney Crosby has been quite the target. [CBS]

Maybe the Penguins lost because they aren’t a good team. [LCS Hockey]

Did the NHL fail the Atlanta franchise? [Puck Rant]

Bruce Boudreau is ready to win a game 7. [Vancouver Sun]

And finally, the Sharks announce that veterans Dan Boyle and Martin Havlat will not be back in San Jose next season. [The Forth Period]