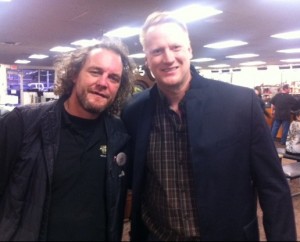 Most fans of the Colorado Avalanche know of Adrian Dater.  Dater wrote for the Denver Post and was quite knowledgeable of the latest news and information surrounding the Colorado Avalanche having covered them since they moved from Quebec.  He is also known for his more abrupt and vocal views on twitter with some of his more recent shenanigans earning him a suspension and most recently fired from the Denver Post.

Dater and his co-worker Terry Frei worked on a book during the 2013 season that was released in the later half of 2014.  That book is titled “Save By Roy” and follows the Colorado Avalanche during their season.  Similarly to the Vancouver Canucks “Ice Storm,” I read a book.

This book looks at the hiring of Patrick Roy and bringing him to the NHL and leaving the QMJHL.  It covers the NHL Entry Draft where the Avalanche selected Nathan MacKinnon.  It covers all 82 games through the ups and downs and the storylines that follow the team and finally ends with their first round matchup against the Minnesota Wild.

There are a number of issues I have with this book the biggest is that after reading it, it does not explain how Roy saves the Avalanche.  The premise and book synopsis suggests this book tells you how Patrick Roy came into the team and was able to personally cause the success of the team.  The authors do spend a few sentences explaining that the new system that Patrick Roy wants the team to use but that’s the end of it.  There’s no explanation of how Roy saves the Avalanche and the thesis question is left unanswered.

The lack of analysis is seen throughout the book.  The authors cover all 82 games saying who won and lost but at best the biggest detail they give is who was in the line up and who scored goals.  There was no analysis of how the Avalanche played, a big critique as the Avalanche were ranked 25th in Scored-Adjusted Corsi, a possession statistics that is our current best data feature to predict feature wins.  The 2013 Colorado Avalanche were constantly outshot and outplayed but thanks to the 3rd best PDO, finishing at 101.8%, in the league the Avalanche were able to hang on to the end.

The analytics community would point out that that Roy didn’t save the Avalanche, he was lucky to be on the high end of shooting variance.  It’s an even more ironic when Dater compares the Avalanche to the Toronto Maple Leafs (ranked 27th in Scored-Adjusted Corsi) by saying just after game 3 of the regular season:

Outside of those major issues the other issues to pick at is that the authors personal views really start to show through.  It is clear that the authors hold sports journalism views from the 1990s which are outdated in today’s hockey.  This includes:

So who should read this book?  If you are interested in the Colorado Avalanche or if you’re interested in hockey from the management side then it is an interesting book to follow the team throughout their year.

Save By Roy was an quick read, coming in just under 300 pages, but it does not offer anything new that was previously known in the media.  Combined with the fact that the book does not offer any real sort of analysis I walk away from the book feeling like a lot was missing.  I will leave it up to you if you wish to read this book.