With the framework in place to finally end the NHL lockout, many teams will be scrambling to assemble their teams, invite players to training camps and make important personnel decisions. For the New Jersey Devils, they have a pretty good idea who will be on their opening night roster, but one high profile question facing them as they enter the abbreviated 2013 season is who will wear the captain’s C on their left shoulder.

Their previous captain (Zach Parise) skipped town to go play in his home state leaving the spot vacant as they search for the franchise’s 10th captain. Since Martin Brodeur isn’t eligible (and under ideal conditions, he WOULD be the favorite here), here are who I think are the three best candidates to lead the defending Eastern Conference champs int0 what will be a whirlwind title defense:

He has the experience of wearing the “C” in Atlanta and he is arguably the Devils best player; he also makes the most money (not that this a serious factor). Some traditionalists may not agree with naming Europeans as captains in the NHL, but after seeing how Kovalchuk played the final three series last spring with a wrecked back he earned even more respect than he already had inside the locker room.

Not knowing much about him before he came to New Jersey via trade, I quickly learned he can be very engaging with the media and has always been willing + available after games. As captain the media attention shouldn’t change, as he has been a go-to-guy since the day he was acquired.

Salvador has never been a captain but he is a quiet, lead by example player, who is very popular amongst his teammates. He has been a steady presence on the blueline since he was traded from St. Louis, and his outstanding performance during last spring’s run to the Finals was even more remarkable considering he missed the entire previous season with a concussion. The Devils made it a priority to re-sign him in the offseason, showing that they believe in what he brings to the table, which includes leadership. 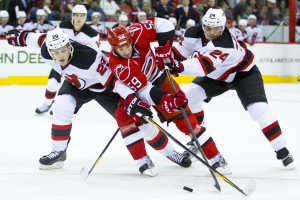 This is the longest of longshots, but if it were up to me I’d pick Zubrus. He’s the funniest guy on the team and most importantly his teammates have entrusted him with being the locker room deejay, which isn’t just given out without merit. Zubie keeps it real when talking to the media also; he doesn’t sugarcoat things and he calls it as he sees it. Again highly unlikely, but to recap: if the Devils decide to ask me for my suggestion, he would be it.

Dan Rice can be reached via Twitter: @DRdiabloTHW or email: drdiablo321@yahoo.com