This post appears in our new section called Overtime. It is our home of Long Form journalism on all things hockey & culture. We are now porting over many of our best posts from our old Overtime site as well as publishing new material. If you like this format then please sign up for our free Overtime newsletter. You’ll get updates when we add new material to this section.

Although not entirely surprising, the most recent, borderline ridiculous development to revolve around the National Hockey League is the issue of offense, or to be more particular, the apparent lack thereof.

A topic which has been gaining considerable momentum in recent months, and one which has been increasingly prevalent within NHL discourse since the lockout of 2004-05, the perceived issue surrounding the lack of offense in the NHL is, at its most basic level, yet another attempt to draw greater interest and popularity to the sport of hockey.

Let’s be honest, goal scoring is arguably the most exciting moment in a hockey game, so therefore, theoretically speaking, more goals should result in greater excitement surrounding the game and the NHL, therefore drawing greater interest to both the sport and, most importantly, the League itself.

However, there are a number of key issues which arise when considering an increase in offense, in particular, surrounding the proposed manners by which such will be made possible.

“Equipment is Used to Protect, Not Make Saves”

The first method being heavily discussed in order to increase offensive production in the NHL is a reduction in the size of goaltending equipment. In theory, the reduction in equipment size for goaltenders results in less surface area covered, and as a result, quite simply, more of the net is made available for the puck to enter.

But wait a second, did the NHL not reduce the size of goaltending equipment once before?

That’s right, in case you had forgotten, the NHL implemented a series of changes to goaltending equipment prior to the 2008-09 NHL season. Essentially, equipment, and goalie pads in particular, now had to be a certain size in relation to the goaltender himself. No longer could a 5 foot 9 goaltender use 38 inch pads, instead, the player had to be measured and assigned a maximum goalie pad size, among other specifications.

Kay Whitemore, Goaltending Supervisor for the NHL, breaks down the impending equipment changes imposed upon the NHL prior to the 2008-09 season in the following video:

The most notable change at the time was the removal of a maximum goalie pad length, which had been set at 38 inches in years prior. Following a measurement process, as previously described, all goaltenders were assigned maximum pad lengths, however, if there was a goalie of incredible height, such as Pekka Rinne, exceptions were made to allow for pad lengths of 38 inches or greater.

With these new changes implemented, the NHL saw an immediate increase in goals per game the following season. In 2008-09, the NHL goals per game average was 2.91, up from 2.78 the year prior.

However, despite these changes, something interesting happened in 2009-10, a trend which has continued to this very season: the goals per game average once again began to drop. In fact, by the 2012-13 season, goals per game had dropped to 2.72, a sharp decline despite the numerous changes made.

Therefore, how can the NHL realistically further reduce the size of goaltending equipment without risking the safety of its players?

In the modern NHL, evolving technology and skater strength means that players shoot immensely harder, as well as more accurately. Nit-picking with the size of goaltending equipment could very well lead to deficiencies in safety, a decision which could put today’s goaltenders at considerable risk of injury.

James Reimer of the Toronto Maple Leafs is just one NHL goaltender who has echoed this sentiment.

“We want to be able to do our jobs properly and be safe. When you’re talking about cutting down the gear, you don’t like that.”

In all likelihood, the NHL will (hopefully) conform to the wishes of it’s goaltenders, and will see player safety, an issue of concern in recent years, as it’s number one priority.

The Broadside of A Barn

Ever heard the saying “this guy couldn’t hit the broadside of a barn” following a missed or wide shot? Chances are you’ll be hearing this one-liner a whole lot less if supporters of increased offense have their say. 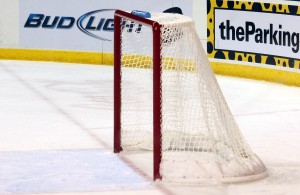 When discussing methods to increase offensive output, alongside reducing the size of goaltender equipment, the other major concept put forward is the potential increase in the size of nets themselves.

Now, we’re not talking about creating soccer sized nets, but the potential addition of perhaps the width of the goal post itself to the net, which comes in at 2.375 inches. As a result, the standard NHL goal would shift in size from 72″ by 48″ to 76.75″ by 50.375″, producing a significant increase in the surface are of the net, 11.78% to be exact. If enacted, such a proposition would allow all shots which would have hit the goal post in previous seasons to instead enter the goal, if applied.

Since the 2005-06 season, the average number of goal posts hit per season is a little over 1220, which translates to about one goal post per game. If this number of shots were instead able to enter goal, the NHL’s goals per game average would jump to a staggering 3.54 per game!

I know the NHL is looking for excitement, but wouldn’t such an incredible amount of offense eventually yield a saturation point? In my opinion, amazing plays, but spectacular saves are equally as exciting.

As a result, throughout the NHL, opinions are understandably varied. Many individuals cite NHL history, indicating that if such immense changes were applied, the meaning and significance of previous accomplishments throughout League history would be severely devalued.

Mike Babcock is one such individual in support of a change:

“You could make the net just out-side the posts so that everything that hits the post now goes in. The goalies are good. We get scoring chances. But it’s hard to beat the goalie. Offense is exciting.”

On the other hand, another veteran and highly respected coach in Barry Trotz feels the opposite, indicating the indecisiveness and futility surrounding the topic.

“I think it should stay the same. I’m more a traditionalist. Find other ways to score on them.”

“There’s a lot of offense, and a lot of goals going on in the League. Me personally, I’m not sure why we’re talking about it so much. I think the game is good.”

With such an incredible amount of discussion surrounding the topic of offense in the NHL, it is only a matter of time before the League takes a formal stance on the issue. However, before it does, it must consider the various impacts such a decision will have upon the game, many of which are discussed within this article.

Sure, you could reduce the size of goaltending equipment again, but as we have seen in NHL history, such a change has did not yield the desired result, so why beat the same drum, especially when it comes alongside the risk to player safety?

A much safer, generally more realistic choice would be to increase the size of NHL nets. At no risk to goaltenders, this choice would lead to an increase in offense. No, let’s be realistic, a ridiculously large increase in offense. With so many goals poised to enter the net, not only would the NHL history books be at risk, but so too would the sanity of the League’s fans, who would be quickly saturated with goal scoring and soon crave defense.

At the end of the day, the NHL should not make said changes to increase offensive output.

Here’s an idea: let’s keep the rules the same for a select period of time, and see how League popularity and fan interest react. After all, with all the numerous, large-scale, and at times dizzying changes made throughout the NHL rule book in recent history, don’t the League’s fans, and most importantly it’s players, deserve a reprieve for seemingly never-ending changes made to what is already, supposedly, the “Greatest Game on Earth”?