A point ahead of the Toronto Maple Leafs for the final wild card playoff spot in the Eastern Conference, the New York Islanders are a different team than they were in January. At that time, they were at the bottom of the standings and sent starting goalie Jaroslav Halak to their American Hockey League affiliate in Bridgeport and fired head coach Jack Capuano. Winning 14 of their last 23 games under new interim head coach Doug Weight, the Isles are now in control of their own playoff destiny. 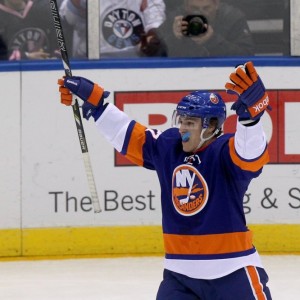 While the play of captain John Tavares and Thomas Greiss has been a key component to the team’s success, it’s been their secondary scoring that has kept them hot. With eight goals in his last 18 games, Andrew Ladd is on pace for a 23-goal season. Another offseason acquisition, Jason Chimera has 16 goals and has solidified the bottom two lines with his speed and passion. Ryan Strome’s improved play under Weight has also helped provide secondary scoring.

However, the consistent play of Anders Lee and Josh Bailey this season has been vital. Their play the past two months has made sure the Islanders are always a force offensively. The late-season call-ups of former first-round pick Joshua Ho-Sang also give the team more dynamic offensive options. With the injury to the always steady Casey Cizikas, Anthony Beauvillier has filled in nicely on the fourth line. If the Islanders do make the playoffs, they have the firepower to surprise some teams.

Plenty of Options on Defense

Defensively, the Islanders have been like Jekyll and Hyde for most of the season. Through the first 38 games of 2016-17, Nick Leddy, Travis Hamonic and Johnny Boychuk were awful. A combined minus-24 during that span, the three were not playing like the 1-A, 1-B and 1-C defensemen the team considered them to be. After Hamonic went down, youngsters Scott Mayfield and Adam Pelech stepped up admirably. Dennis Seidenberg and Calvin de Haan continued their stellar shutdown play in Hamonic’s absence as well. With Ryan Pulock and Devon Toews in Bridgeport and Hamonic back on the ice, the Islanders defense has the pieces to be aggressive on both sides of the puck. Add in Boychuk and Leddy’s late-season revival and the Isles are deep on D. 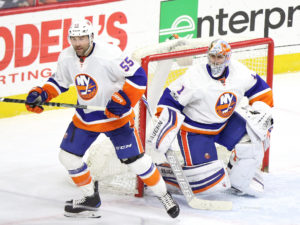 In net, Thomas Greiss has been a revelation this season. However, he’s had a few awful starts of late, evidenced by his 8-6 record since the All-Star break. Regardless, he always gives the team a chance to win. His play during last year’s playoff series against the Florida Panthers cemented his place in the NHL after being pegged as a career backup. This year, Greiss is proving he can be a steady number one goaltender.

Islanders backup goaltender JF Berube, on the other hand, has been mediocre at best. His 3-2-2 record means he does more winning than losing, but a 3.24 goals-against average and .897 save percentage aren’t NHL worthy. With Halak thriving in the AHL, the Islanders will have a decision to make. Do they take a risk of losing Berube? Or do they call up the hot hand in Halak to earn as many points as possible?