February 13, 2013 — the day that a wizard took the reigns as general manager of a struggling hockey franchise.

On that faithful day, Jarmo Kekalainen was lured away from Helsinki, Finland — where he was general manager of the Liiga team, Jokerit — and back into the United States. Kekalainen took over the Columbus Blue Jackets, and was tasked to make Columbus a winner. At the time, the Blue Jackets where in typical territory for an expansion team — struggling to build upon a solid core of players. Kekalainen walked into a franchise that since its inception, had one season where they finished in the top 10 of the conference. The one season in which the Blue Jackets did crack the top 10, they were swept by their rival, the Detroit Red Wings, in the 2008-2009 playoffs. Some sort of wizardry needed to happen within the front office of the Blue Jackets if they were to turn the tide and become a winning franchise.

Less than six months on the job, Kekalainen  brought in free agent Nathan Horton to the Blue Jackets. Before Columbus, Horton was part of the Boston Bruins team that won the Stanley Cup in 2011. On that Stanley Cup run, Horton scored the series winning goal against the Montreal Canadians in Game 7 of the

Eastern Conference Quarterfinals, and scored seven more goals on the Bruins cup run. In the months prior to arriving in Columbus, Horton was once again in the Stanley Cup final, but he and the Bruins lost to the Chicago Blackhawks. After that Stanley Cup final loss happened, Horton told the Bruins he wasn’t going to return. The reason for Horton not returning to Boston was due to the fact that for most of the 2012-2013 season, “nothing happened” in regards to a contract renewal. By the time the Bruins created the contract, Horton was set on leaving Beantown for Test Market, USA.

Columbus has been a test site for many trendy items. The McRib did well in the Columbus area during testing, dictating McDonalds to bring back the sandwich in other regions. Wendy’s opened their first store in Columbus. The t-shirt company Homage opened their first store within miles of the Blue Jackets home, Nationwide Arena. With Columbus being known as the place where trends start, and dreams becoming reality, Kekalainen wanted to bring that essence into the Blue Jackets hockey mentality, and make the elusive dream of a Stanley Cup title a reality to the city of Columbus.

The Word of the Day on Deadline Day: Deconstruction

If cleaning house was one of the chores needed to change the direction of the Blue Jackets, Kekalainen should be endorsed as the face of Mr.Clean products. Before Horton ever put pen-to-paper to be a Blue Jacket, Kekalainen was shipping out players faster than Amazon could deliver your package — and that’s with Amazon Prime! Well, at least on the trade deadline in 2013. On deadline day 2013, Derick Brassard, Derek Dorsett, and John Moore became former Blue Jackets as they were shipped to the New York Rangers. In turn, the Blue Jackets got Marian Gaborik. In addition to Blue Jackets going to the Big Apple, goalie Steve Mason was sent to the City of Brotherly love to play for the Philadelphia Flyers. Remember, all this happened on the trade deadline in 2013; four key Blue Jackets were sent packing, and the house cleaning was officially under way.

Even this past season, Kekalainen moved players. Most notably was the departure of Gaborik — who would go to the Los Angeles Kings and win a Stanley Cup title– from the team. Combine all the moves Kekalainen was responsible plus the addition of Brandon Dubinsky and Artem Anisimov , and you have a new-look team. It isn’t a coincidence that the Blue Jackets then turned into a playoff team after all those deals were made.

He’s Got ‘The Right Stuff’ 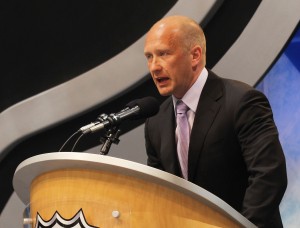 Having an eye for talent is something that Kekalainen specializes in. If I had three percent of the talent Kekalainen had on scouting talent, and transformed it into commentating ability, I could rival Doc Emrick and become a lead hockey play-by-play broadcaster on NBC. It doesn’t matter where Kekalainen goes, the talent seems to stockpile with him.

Go back to Kekalainen and his days with the St.Louis Blues. Under Kekalainen, the Blues scouted David Backes and T.J. Oshie. You know Oshie, the guy that scored those shootout goals against the Russians in the Sochi Olympics, and had one of the best shootout percentages in the NHL; Kekalainen was the guy that brought him into St.Louis. Let’s go even further back into the NHL scouting career of Kekalainen. In Ottawa, he brought in Jason Spezza, Marian Hossa, and Antoine Vermette — who played for the Blue Jackets in the latter part of the 2000s.

Not everything warrants a Harry Potter reference. Only in certain circumstances does a Harry Potter reference accurately depicts something. When dealing with Kekalainen’s scouting ways, in addition to his managerial skills, they can only be described with one word: magical. He sees things that others don’t, he can convince people to come to Columbus and play on a team that doesn’t have a rich history of winning — he cajoled Scott Hartnell into waving his non-movement clause in order to become a Blue Jacket.

The Blue Jackets have  spent the better part of its franchise days chasing other teams and their triumphant techniques in winning games. Some teams have star players who bedazzle the ice with dekes and blistering wrist shots. Other teams have a coach that can find ways to win with an ever evolving roster. Most teams however stumble across the dissatisfying taste of losing. For a while, the Blue Jackets were one of those teams with the bitter taste of losing in their mouth. Since the hiring of Kekalainen, the Blue Jackets have discovered that they too can be a team with spectacular players, and a coach in Todd Richards that conducts the team to like a symphony — knowing how to get the best out of his players when games in April become mentality and physically exhausting. Before you point to the players or the coach, remember that Kekalainen was the architect to this infrastructure.

Currently a student at The Ohio State University. Play-by-Play announcer for Ohio State football, basketball, and other sports on student radio. Writer of the Columbus Blue Jackets and other sports for U Weekly Newspaper. I believe I’m the real life version of Ted Mosby.