Rivalries are a peculiar thing in hockey. You can’t always pinpoint the exact moment at which they start, but you sure know when you’re in the midst of one. It’s safe to say the Winnipeg Jets and St. Louis Blues are in the midst of a doozy after yesterday afternoon’s heated tilt.

Rivalries in hockey are a wonderful thing, brining the emotions in an already emotional game to an even higher level. It’s how you get teams to play playoff calibre hockey in October, despite the season still stretching long and unforgiving ahead of them, as the Jets and Blues did yesterday. This fact was not lost on the experts watching the action.

not even Halloween. This doesn't look an October game between #nhljets and #blues. as @Real_ESPNLeBrun would say – "This is big boy hockey."

Looking back on it, it seems this rivalry has been going for a while, as games between the Jets and Blues never lacked for physical play or altercations after the whistle. That they’re in the same division, fighting for the same playoff spots and playing a very similar style, adds fuel to a fire that’s already burning brightly.

If neither team is any good, unfortunately, a rivalry between two NHL clubs, no matter how storied and historically bloody, will always fail to impress. Take the Philadelphia Flyers and Buffalo Sabres, for instance. In the late 90s and early 2000s that was a rivalry you couldn’t get away from every year come playoff time. Today, many fans have all but forgotten it. Similarly, nobody mentions the once-breathtaking hatred between the Edmonton Oilers and Dallas Stars of the same era. In short, for a rivalry to really click, both teams have to be good.

In the first season the Jets were in the Central Division, the framework for a rivalry was laid, but the Jets simply weren’t good enough to have a real hatred for a far superior Blues team. While the Blues remain among the NHL’s best and the Jets are still fighting to get into that club, improvements made in Winnipeg, coupled with a nasty team being assembled on both sides, has led to an emerging Jets and Blues rivalry. 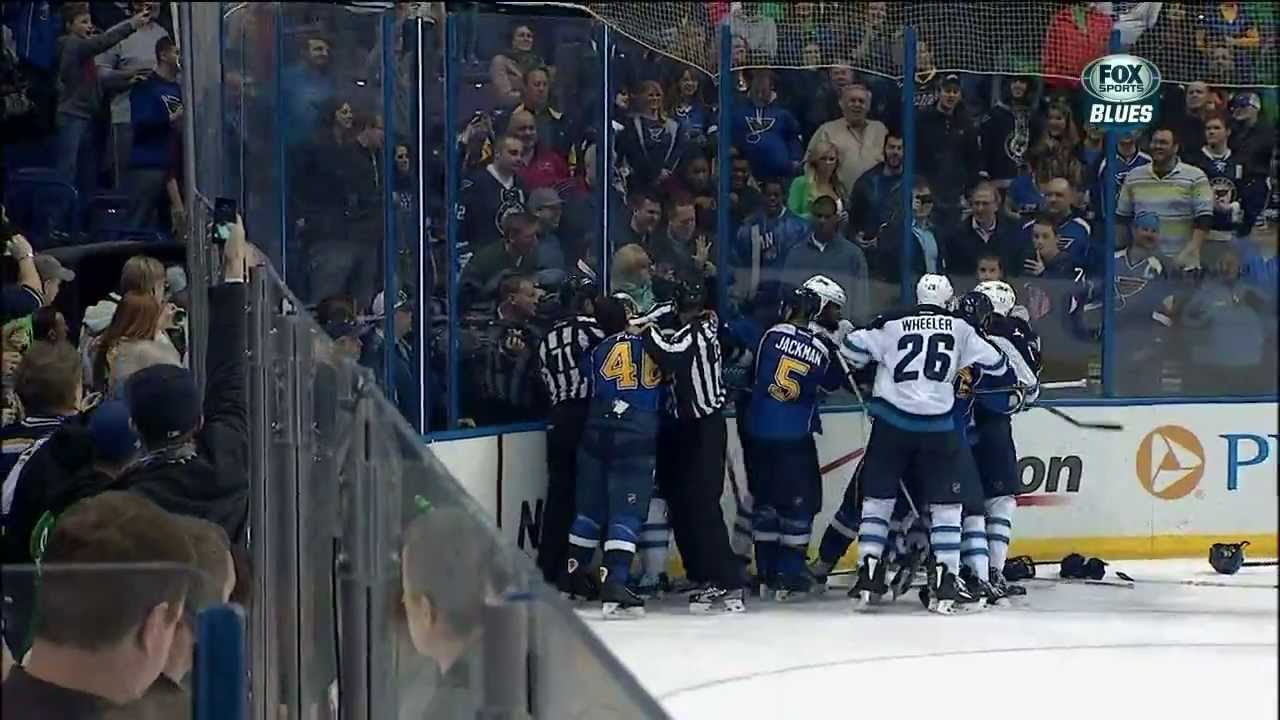 The hatred between the Jets and Blues isn’t new, and while the personnel may change (as indeed they have from this video) yesterday’s penalty-filled match proved the animosity has not, and now both teams are good enough for each game to have meaning. The two teams entered Sunday’s action tied for top spot in the Central with 4-1 records. The hard-fought and bitter game was exactly the kind of game one expects of a rivalry, which was lost on neither the players nor the coaches.

From a Dustin Byfuglien hit that left Jay Bouwmeester reeling to a late hit on Mathieu Perreault by Blues rookie Joel Edmunson, the Jets and Blues served up an entree of classic nastiness before a ravenous crowd of 15,294 at the MTS Centre, and while the crowd left unhappy with the end result, the main course the two teams set before them was excellent. It had all the hallmarks of a rivalry game, with plenty of physicality, while still allowing the stars of each team to shine. In particular, Vladimir Tarasenko had a night to remember, with two goals including the game winner.

A Whole Lot of Nasty

While the star players did come through in the end for both teams, space on the ice was hard to come by. Big hits abounded, as one might expect from two teams built so strongly (literally, as both the Jets and Blues are among the NHL’s heaviest teams), and Adam Lowry was right in the middle of it for Winnipeg.

These are two big, nasty teams, and when they meet, sparks can be expected to fly. Each team had their share of big hits, and conversations after the whistle were plenty. Speaking as a fan who enjoyed the Avs-Wings rivalry of the 90s and early 2000s, the game between the Jets and Blues had some encouragingly familiar elements.

Great News for the Jets

Frankly, as a Jets fan, a rivalry with the St. Louis Blues is reason to get excited. The Blues are not only one of the NHL’s nastiest teams, but among its best overall teams as well. For Winnipeg to be a thorn in their side is a great sign, and when the veteran coach behind one of the NHL’s top squads acknowledges the rivalry, as Ken Hitchcock has done more than once, Jets fans can’t help but feel a little pride. After all, the big boys are acknowledging you’re almost ready to join the club. Not, of course, that this will earn the big boys any leeway when next they come to Winnipeg.

A team with a poor record, no matter how physical, is not worth viewing as a rival. The Jets and Blues are building a nice little rivalry as the Jets improve their record, and it’s no surprise they would be having it out with St. Louis, a team that, in many senses, they have modelled themselves after. Like the Blues, the Jets have lacked a true superstar for most of their time in Winnipeg (though the emergence of Tarasenko likely changes that for St. Louis) and have found scoring by committee. Also like the Blues, their best scorers are, for the most part, a tough lot capable of playing a grinding game.

Like the Blues, they are perhaps strongest on defense, despite their forward depth. And like the Blues, they have a 1A-1B system in goal that seems to work very well for them. If the Jets are trying to emulate the Blues, they’ve picked a good team to copy, and when the two collide, their similar styles make for entertaining hockey games.

There was an article in the Winnipeg Free Press (I won’t link it, as it’s behind a pay wall) that stated the hockey the Jets and Blues play, notably against each other, is the kind of hockey the NHL should be trying to market. It’s the kind of rough yet skilled game that would surely draw new fans, and while obviously it’s best to win the game, the Jets can take some pride in being a part of it. Over the next few years, the Jets and Blues will form a rivalry among the best in hockey.