The series between the NHL’s two true juggernauts — the series that was hyped as a “Clash of Titans” and discussed to the nth degree more than any other in the 2018 Stanley Cup Playoffs thus far — lived up to all the hoopla. The fast-paced, back-and-forth series went the distance and was just as good as advertised. At the end of the day, it was the underdog Winnipeg Jets who took the do-or-die Game 7 with a decisive 5-1 victory.

Here’s how the Jets hunted and killed the mighty Predators Thursday night and the reasons they’re moving on to face the NHL’s Cinderella story, the Vegas Golden Knights, in the Western Conference Final.

In Monday’s Game 6, the Jets fell behind just 1:01 into the game when Viktor Arvidsson opened the scoring. After taking the lead, the Predators stacked the neutral zone and the Jets never found a way to break through the wall.

Game 7 was remarkably different. The Jets grabbed the all-important first goal when Tyler Myers scored from a bad angle at 8:41. Just over two minutes later, Paul Statsny grabbed his second point of the period when he refused to be knocked off the puck, grabbed his own rebound, and shovelled it past Pekka Rinne.

Paul Statsny was in on the Jets’ pair of first-period goals that got them off to a great start. (Amy Irvin / The Hockey Writers)

The goals weren’t beautiful by any stretch of the imagination — in fact, they were both quintessential “garbage goals.” However, the trashy goals were treasure to the Jets, as they ensured the Predators had to open up and start skating rather than just resting on their laurels in the neutral zone with a lead.

With the Predators possessing such a powerful offence, the game wasn’t anywhere close to out of reach for the home side even though they were down 2-0 early. Later in the first, Kyle Connor was sent to the sin bin for what was a pretty marginal crosscheck on P.K. Subban — Don Cherry accused the defenseman of diving during Coach’s Corner — and the man that “Grapes” said should have been in the box scored on the ensuing power play to cut the Jets’ lead in half.

The Jets didn’t get rattled after P.K. Subban cut the lead in half, but instead, stuck to their game. (Christopher Hanewinckel-USA TODAY Sports)

The Jets could have easily allowed the goal to deflate them, but instead, they stayed strong and stuck to their game. They didn’t allow the Predators to maintain the momentum they grabbed from the goal and managed to get to the dressing room with their lead intact.

Jets Slowed the Game down in the Second

The second period was, quite honestly, pretty boring, but that was definitely by design and alright with the Jets. 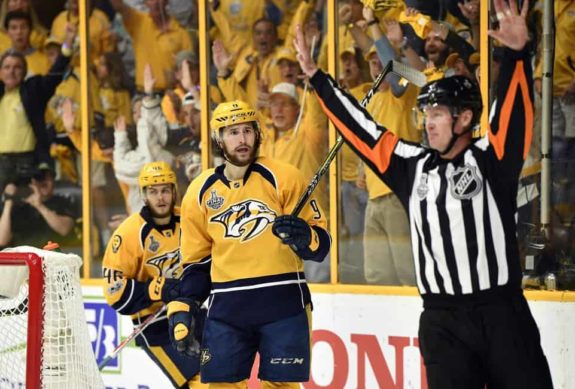 There was no celebrating for Filip Forsberg or the rest of the Predator’s top line in the second period, as the Jets’ defense shut them down. (Christopher Hanewinckel-USA TODAY Sports)

They brought the pace of play down to a crawl in the middle frame and didn’t allow the Predators’ top line of Filip Forsberg, Ryan Johansen, and Viktor Arvidsson — a trio that combined for eight points in Game 6’s 4-0 win — to wheel and deal or generate any ten-bell chances. While the Jets didn’t have much in the way of big-time scoring opportunities either, they played tidy defensively and put a padlock on their lead.

Feels like the #nhljets have been on a power play the entire second period so far.

They only allowed six shots, and at one point, Connor Hellebuyck went nearly eleven minutes without seeing any rubber.

“We didn’t give up much,” Stastny said in a post-game interview. “When we did, Bucky (Hellebuyck) made great saves.”

Even Peter Laviolette acknowledged the Predators struggled to get chances.

“Not only are [the Jets] a good offensive team but they’re a good defensive team as well,” Laviolette said post-game. “And we just found it difficult to get going the way we might like to.” 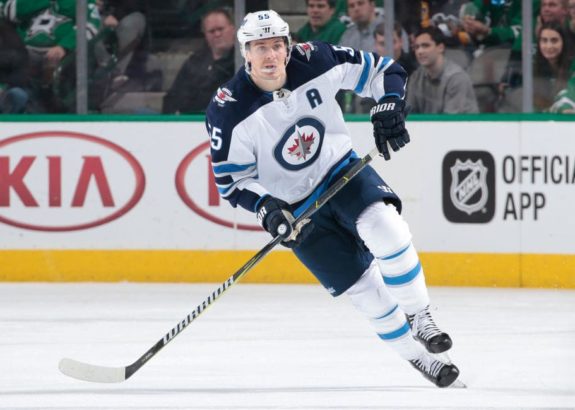 Mark Scheifele’s late-second period goal was a good example of the opportunism the Jets showed in Game 7. (Photo by Glenn James/NHLI via Getty Images)

The Jets showed they were strong men as they seized the opportunity to re-up their lead to two before the second period expired. A not particularly dangerous-looking, somewhat jumbled entry into the offensive zone quickly turned into Mark Scheifele’s tenth goal of the 2018 NHL Playoffs when he wired home a wicked one-timer after he was fed by Blake Wheeler.

The Jets were also opportunistic in the third on the man advantage. Their power play — which was powerless in Game 6 and actually hurt their momentum — cashed in on their only opportunity of the evening. After Juuse Saros stopped Patrik Laine’s one-time attempt with Ryan Johansen in the box, Paul Stastny was right there on the doorstep to deposit the loose biscuit in the basket and put the Jets up 4-1. The goal ensured the Jets would be leaving the so-called Music City singing a happy tune.

Jets Enjoying the Moment, but Not for Long

There’s no rest for the weary, as after seven gutsy games against the NHL’s top team, the Jets will have just one day off before beginning their Western Conference Final matchup against the Golden Knights at Bell MTS Place on Saturday.

Despite that, Jets’ players said post-game they were going to enjoy the win, even if just for a little while. Connor Hellebuyck, when asked what he thought about the Golden Knights, responded this way.

“I’m don’t really have any thoughts right now, I’m enjoying the moment…” he said before joking he would set a timer, and in 20 minutes, start thinking about the next matchup. “We’re going to enjoy tonight, and probably tomorrow, get back to it,” he continued.

Winnipeggers, like Hellebuyck, certainly weren’t worrying about their team’s upcoming matchup with the Sin City squad after Thursday’s game, choosing instead to revel in the win by taking to Portage and Main. They packed the city’s most famous — and usually pedestrian-free — intersection for an impromptu party celebrating Canada’s team and the fact they are halfway to hoisting the Stanley Cup.

O Canada breaks out at Portage and Main. This is amazing. #NHLJets pic.twitter.com/d6KB94J4cS