I don’t know know any other way to say it, but Justin Bieber is bad for hockey. Hockey is unequivocally Canada’s best export; Canada’s worst export? Justin Bieber. I’ve been thinking about this ever since he showed up late to game seven in the Western Conference in L.A. wearing a Los Angeles Kings jersey and the camera panned over him. Because he was LATE. I will confess I’ve never been a fan of his, but this summer a lot of things he has done has just made me want to kind of smack the kid. The final straw was what happened when he was in Chicago. The following might seem very redundant, but hang in there, I’ve got a good point to this all.

Now I’m well aware he played a little hockey as a kid, and he’s from Canada. Honestly for any hockey fan seeing the Stanley Cup is an unbelievably cool thing to see and an honor to be in the presence of. However, if he’s grown up in Canada and played the world’s greatest sport (which most Canadians have), I find it impossible that he’s unaware of the sports’ long standing traditions. I’m glad I have never seen or no one has given me a bobble head of the kid, cause I’d have it broken by the end of the day, and likely have his head taped to another part of his body. Yeah, I really think the kid’s a twit.

Here’s a big issue I have with the teen heartthrob: who goes in to see The Cup wearing something that I’m not sure even qualifies as pants? Where I live, wearing an outfit like that indicates something to the effect that you’re ‘available’ in prison. You’ve got plenty of money, wear real clothes, kid. Dress up a little. Check out the last YouTube video for a view of his fashion choice of the day. Then he dares to touch The Cup? While standing on the team’s logo in the center of the locker room. Blackhawks, I’m so sorry, but you may be jinxed now; unless of course you are hoping for a longer vacation next year. I’m really worried about their captain Jonathan Toews now too. For the team to even give Bieber access to the locker room, provide him with a jersey and then hang said jersey in Toews’ locker, I don’t think there is enough clorox in the world to kill the bad karma. 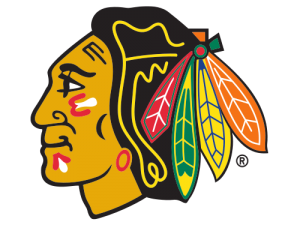 Why companies give celebrities free stuff is slightly questionable to me to begin with. Movie stars and some hockey players I get, but to give Bieber a jersey? No one is going to want to get interested in hockey, just because Bieber is wearing their team’s logo, jersey or cap. Especially since it has been well documented that he will wear any team’s apparel.

Justin Bieber, you're not allowed to touch the Stanley Cup until you can figure out what team you're rooting for. pic.twitter.com/5btKfP8DVg

The kid obviously isn’t a fan of any team really, except those who are willing to grant him access to restricted areas and have him shown attending their games; does anyone believe he actually pays for a ticket into the arena when he goes to a game? If you watch YouTube you’ll see he doesn’t even watch the games.

Now all of this you’ve probably heard before, but I’m going to go into why he isn’t good for the NHL and for the sport of hockey. I hate to go here, because I like Greg Wyshynski who writes for Puck Daddy. He’s a really smart guy, but he wrote an article in July about how Bieber was his hero that day. Puke. Wyshynski made a point of saying how standing on the logo was a stupid tradition. He wrote that people were in an uproar that he used the famed Indian head logo as a floor mat, and we should be happy he did and maybe it would prevent teams from continuing to put logos in the middle of the floor and expecting people not to step on them. But, it gets worse. I will quote from Wyshynski’s column ‘Why Justin Bieber is my Hero Today‘ on July 10, 2013.

‘Again, I’m happy he did it. It’s a stupid tradition. “Hey, let’s put a giant thing in the middle of a high-traffic area and not allow people to touch it.” Dummies.

Personally, I find that incredibly insulting to hockey. I’m sorry Wyshynski, I’m really thinking you had to be blackmailed by some 12-year-old girl to write ‘Justin Bieber is your hero’ in any area. Traditions are very important, and they mean a lot to those in the hockey community. I saw a YouTube video that reminded me of why the hockey players might have adhered to the longstanding tradition. I believe when guys like Toews, Patrick Kane and other Blackhawks walk past the logo, they might not have this quote in their head, but they respect the logo for this specific reason.

“If I have seen further it is by standing on ye shoulders of greatness.”

I believe every player that puts on their NHL uniform and wears their team’s logo at some point thinks about all the great men who skated before them that made hockey the great sport it is today. That’s why tradition is important. Traditions pay homage to our past and the people who revolutionized things to make them what they are today. I imagine every rookie is humbled when he walks by that logo for the first time, the second time, and so on. He thinks about the greats who walked that path before him. If the logo is on the floor, then you can imagine the path that others walked around it before you. If it’s on a wall, it might not have the same poignancy. You’d pass by it, but not necessarily think about it, having to walk around it and respect it, I’d think it would make a team player respect his job, his teammates, his franchise’s legacy and the city he plays for and represents more. Sorry again Wyshynski, but this time I disagree with you. I’m sure you did that article in a comical manner, but if you didn’t, I feel extremely sorry for you.

Now yet another reason why Bieber is bad for hockey. He isn’t a hero and shouldn’t be a hero to anyone. Giving him a shirt or showing him on TV going into a game isn’t going to convince his 12-year-old little girl (or boy) fans want to watch hockey. It’s just like the situation with letting Sidney Crosby skip ahead in the DMV line; people didn’t show up to get their driver licenses, they came to see him. These hockey players work hard, they are skilled and highly-trained athletes. These guys have worked from childhood to get where they are. They didn’t have mommies with cameras to put them on YouTube skating that got them where they are. A lot of people can sing. People are discovered every day. If Bieber had been any good at hockey, being a good ‘ol Canadian boy, he’d be in the NHL, but he obviously can’t play. Hockey payers work hard. They don’t pay people to do half the work for them to make them look good, they do their own work, and their heroes are usually the parents who sacrificed a great deal to help them get to where they are.

Finally, sorry to harp on you Wyshynski, I do really like you, and read your work regularly, but hero isn’t a word to throw around. Bieber’s an idiot. A hero is a person who is admired for his noble qualities. A kid who takes a pet monkey and then leaves it at the airport in another country is a jerk. We have hockey players who are heroes for many, many reasons. I found pages and pages on the internet of NHL players who I consider to be much better selections as heroes. Here is just a minuscule list of individual hockey players who have their own charity organizations: Marion Gaborik, Brad Richards, Alex Ovechkin, Vincent Lecavalier, David Clarkson, Tim Thomas, Wayne Gretzky, and Mario Lemieux. And there are hundreds of others who do charity work without any fanfare or publicity; this doesn’t even cover what hockey players overall do for charity. Players routinely make trips to hospitals to bring a smile to the faces of kids and people less fortunate than them. I looked up Bieber’s charitable acts — he requested for his 18th birthday you donate $18 to a clean water fund… One he didn’t even start!

So I have come up with a solution to the Bieber problem — half of North America should like it, and well the other half will likely send me hate mail. I can live with that.

Since Bieber is from Canada, I propose you Canadians take him back. I found I’m not the only one who thinks this is a good idea. 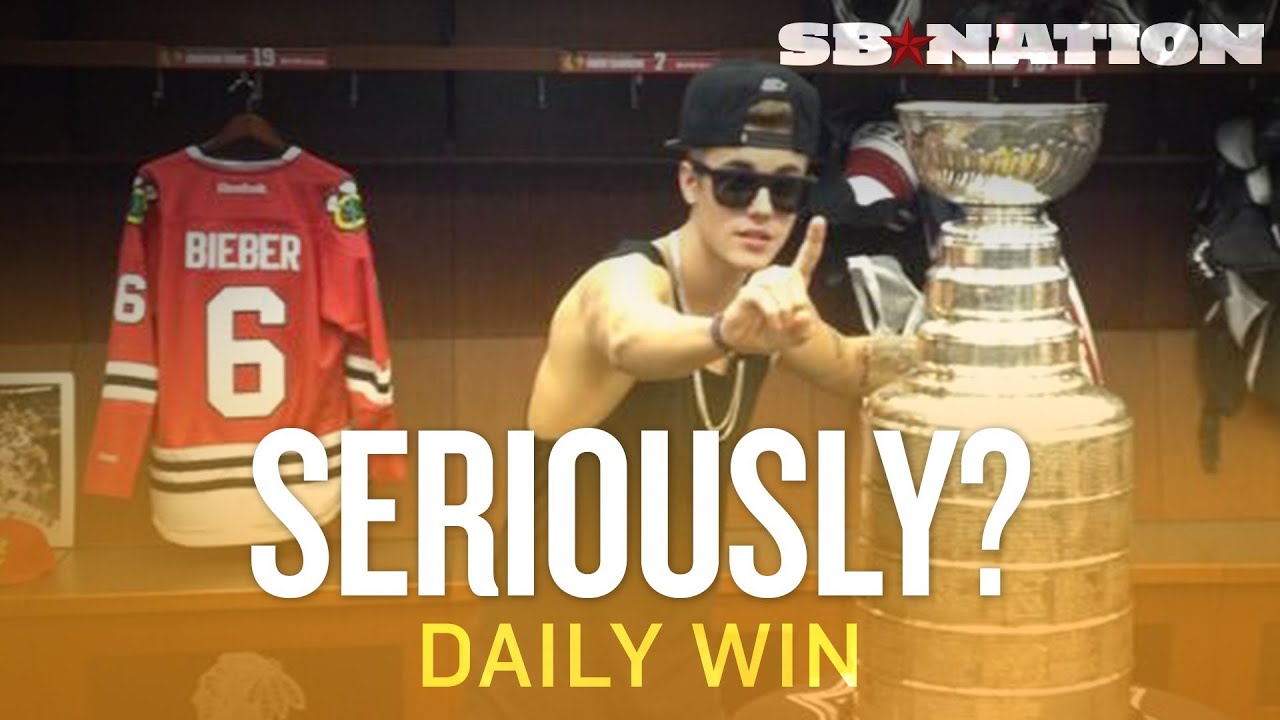 Now I know you don’t want him either, but I would be willing to compromise. I think since we in the United States have had a stranglehold on the Stanley Cup since 1993, we in the good ‘ol USA should let each of the seven teams in Canada win The Cup for the next seven years (yes even you Toronto!), while Canada maintains keeping Bieber in the country for that amount of time. By then, some other kid will have come along and hopefully he or she won’t like hockey and ruin it for everyone.

All hate mail can be sent to me directly at cherietinker@gmail.com or comments made below.

4 thoughts on “Why Justin Bieber is Bad for the NHL”