The NHL has released its schedule and with it, the new division realignment for the 2013-2014 season.  While the Detroit Red Wings will be departing the West and the Central Division for the “greener” pastures of less travel of the East, the new Central Division has added three new teams; the Winnipeg Jets, Dallas Stars, and the Colorado Avalanche.  In this 3-part series, we’ll take a look at the new teams who were added and why it won’t take long to start hating them. 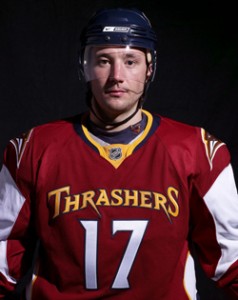 While looking at these numbers, most Predators fans won’t exactly be shaking in their boots.  Dating back to the early-days of the Thrashers, the two teams have only met 17 times total.  In those match-ups, the Predators have typically been the team that has been on the better end of the standings in their conference, while the Thrashers/Jets haven’t had nearly the success the Predators have had at making the playoffs.

Why You’ll Hate Them

When the 2013-14 season finally rolls around, there will be two good reasons that Predators fans will quickly understand for hating the Winnipeg Jets; Winnipeg can be a hostile environment for opposing teams and this is not your older brother’s Atlanta Thrashers.

One does not need to look far to see that the fans in Winnipeg have come out in force to support their reborn team.  The MTS Centre has staked out its spot as an intimidating arena to play in for opposing teams, as the rowdy Jets fans loved to loudly taunt the opposing players.

Whether you’re one of the top players in the league:

Or an Olympic Medal-winning goaltender:

Or even the coach:

No one is safe from the harassment of the raucous bunch in Winnipeg.

With an up-and-coming roster, the Winnipeg Jets are not the same team who sat for years as bottom-feeders in the Eastern Conference.  While they may not be a perennial playoff-contender yet, they are quietly building an impressive stockpile of tough, but skillful players.  It won’t take very long next season for Predators fans to grow wary of constantly seeing players like Evander Kane, Blake Wheeler, Mark Scheifele, Dustin Byfuglien, Tobias Enstrom, and Jacob Trouba being a thorn in the side of the Predators.

The Winnipeg Jets, while struggling to gain much of a foothold in the weakest division in the league over the past few seasons, will be looking to make their mark out West, while the Predators didn’t have a great season last year.  These two teams look like they’ll be ready to collide for what could end up being some surprisingly gritty and testy contests next year.

Join us next time for the second installment: Better Know Your New Predators Rival: Dallas Stars