With the Chicago Blackhawks two games into their annual Circus Trip, and with an almost fully fit team now that defensemen Duncan Keith and Michal Rozsival are back from injuries, can the Blackhawks register another winning road trip?

The Circus Trip, aptly named by the Hawks as the circus takes over the United Center for two weeks, will see the defending Stanley Cup Champions visit six teams in Edmonton, Calgary, Vancouver, San Jose, Anaheim and Los Angeles. For the past few season, the Blackhawks have come back to Chicago with a big road trip win. This season, however, the Hawks are currently 3-5 on the road. At only one game into the road trip, the Hawks have an overtime win under their belts after a thrilling game against the Edmonton Oilers a few nights ago. So, what have they got to do to make sure they head back to the United Center in the best possible position? Who have they got to rely on? And, how do the goaltending duo match up?

The Blackhawks big guns have been a massive help so far this season. With Patrick Kane currently on a fourteen game points streak, and line mate Artemi Panarin making a name for himself, they’ll be hard to 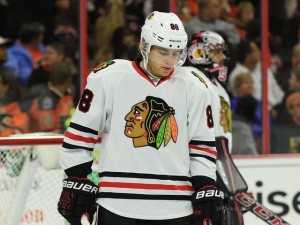 stop by any opposition. Kane’s point streak currently stands at a huge ten goals and fourteen assists in those games, taking his tally up to 30 points so far, and earning himself the top point scoring place on the Blackhawks roster. With his “magic” hands, slick moves and speed on the ice, Kane is a danger to any other team in the league.

In the same amount of games, Panarin has bagged fifteen points, sitting just behind Kane on the roster. Blackhawks coach, Joel Quennville, has proved that his acquisition of rookie Panarin was definitely worth the risk. Together, Kane and Panarin’s pairing is dangerous and so entertaining to watch.

Last weekend, the Hawks welcomed back two important blue line presences in the forms of Rozsival and Keith. During the second round sweep of the Minnesota Wild in the playoffs last season Rozsival fractured his ankle in game four. He had to undergo successful surgery in May to help 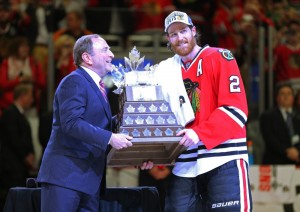 repair the damage, but it unfortunately meant that the defenseman had to miss the rest of the playoffs and the start of the new season to recover.

Keith made a welcome return to the line up, too. The 32-year-old defenseman missed ten games due to surgery on an injury he also sustained in the playoffs last year. Keith underwent knee surgery to repair a torn meniscus just a month ago and has made his return a lot sooner than anticipated. Keith was last season’s MVP and won himself the Conn Smythe trophy after an astounding playoff series in which his time on the ice was through the roof! Proving that he’s ready to go, Keith already has scored a goal and an assist over the two games he’s been back.

There has always been a lot of criticism about the Blackhawks’ goaltending, particularly aimed at Corey Crawford. For example, during the first round of the playoffs last season against the Nashville Predators, after the first period Crawford was substituted for Chicago local boy, Scott Darling. In that first period, Crawford allowed three goals on twelve shots. Darling then went on to play all of games three, four and five of the series. However, in game six of the same series, he

Between the Pipes – Corey Crawford (Amy Irvin / The Hockey Writers)

was relieved by Crawford at the start of the second period for a similar reason. Crawford then went on to play every remaining game in the playoffs and eventually led his team to lift the Stanley Cup after a shut out game six at the United Center.

Criticism aside, Crawford has played a big part in some of the Hawks’ wins so far. Just a few nights ago during overtime against the Edmonton Oilers, Crawford denied Taylor Hall, robbing him of the chance of victory for the Oilers. Darling, however, has been given the go ahead to start in nets for the game in Calgary tonight (Nov 20).

So, with the Blackhawks part way through their six game Circus Trip, they can only work and battle hard to repeat previous years successes.

I currently live in Luton, United Kingdom and I am big a fan of the Milton Keynes Lightning (English Premier League) and the Chicago Blackhawks.
I write match previews and other articles for the Milton Keynes Lightning website and I also help to write and put together articles for the match night programme.
I am a Media Performance graduate but my passion lies with ice hockey