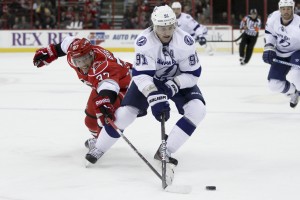 Time to dust off your hockey jerseys, tape your sticks, and polish your Stanley Cup replicas (don’t lie, I know you have one) because it’s been far too long.

However, if you’re a Tampa Bay Lightning fan, your hockey memorabilia has been away longer than most.

After an impressive 2010-2011 season in which the Lightning made it to the Eastern Conference Final, the team did not make it to the playoffs the following season, missing the 8th seed spot in the Eastern Conference by eight points. Having the entire off-season, as well as the extra 113 days from the lockout to regroup and make the team stronger, the Lightning head into the post-lockout hockey world with some fresh new faces in the lineup.

Though at the surface, it would appear the only problem that plagued the Lightning’s season last year was the goaltending, ranked in dead last for GAA, but that was not the case. Among other issues, both the power play and penalty kill took a dramatic nosedive in the rankings. In the 2010-2011 season, the Lightning were ranked sixth on the power play and eighth on the penalty kill. Last season? They were ranked 25th and 26th overall.

The Lightning set out to fix these problems, and acquired back-up goaltender Andres Lindback, center Kyle Wilson, and defensemen Benoit Pouliot, Sami Salo, and Matt Carle. Not to mention that Tampa Bay’s AHL team, the Syracuse Crunch, is ranked number one in both the East Division and the Eastern Conference. Goaltender Lindback, who while in Nashville backed up Pekka Rinne, will now be able to prove his worth, while Pouliot, Salo, and Carle look to strengthen the defense.

Although there are many hopes and aspirations for those who are putting on their Lightning jerseys for the first time, it’s impossible to forget about those who are still there. Starting with the obvious, Steven Stamkos is expected to have a stellar season after scoring a staggering 60 goals last season, ten ahead of Pittsburgh’s Evgeni Malkin. It’s hard to believe that this is the same hockey player whose inaugural season was far from all star-esque. Tallying 46 points in 79 games, Stamkos scored 23 goals and 23 assists, a far cry from his performance in the last three seasons. Under the leadership of veterans Martin St. Louis and captain Vincent Lecavalier and new training methods, Stamkos transformed into the jaw-dropping superstar that the hockey world admires today.

With the shortened season, there come the good and the bad. Let’s start with the bad: along with the new acquisitions, chemistry may be the biggest challenge facing the Lightning. With new players comes new styles of play, new ways of doing things, etc. Had the season started back in October, the team would have had an opportunity to bond during training camp, along with the preseason. However, just because they won’t have as much time as they would have had there been a full season, doesn’t mean that they won’t be a stronger team. Throughout this season, guys will feel which teammates they connect better with on the ice, and time will tell who works best with whom.

A shortened season means that the game will be fast-paced. Now that it looks to be a 48-game season, the race for the playoffs will be even tighter than before. That means that the Lightning will have to be playing at their best once the season starts back up. No screw-ups, no small mistakes, and no sloppy plays. The intensity of the game will be at an all-time high, and everyone will be playing like they have something to lose, because they do. The players know that, the coaches know that, and more importantly, the fans know that.