The Tampa Bay Lightning opened their three-game road trip by defeating the Calgary Flames 6-3 on Wednesday. It was the Lightning’s second win in the past nine games and snapped the Flames’ six-game win streak.

The game also marked a potential turning point for the Lightning, as they came from behind down 1-0 early in the first period and received offense from eight different players in a physical matchup between the clubs.

Victor Hedman, playing in his 500th career game, tallied three assists and Brian Boyle scored the team’s first two goals, including a breakaway tally to give the Lightning a 2-1 lead in the first period. Alex Killorn snapped an eight game pointless streak by registering two goals and an assist on the night. The Lightning were able to do this without Nikita Kucherov, who was a late scratch just before game time.

Goaltender Ben Bishop made his fifth start in the past six games, and despite posting an .864 save percentage in the game, made some big saves during the contest, including an important stop on Flames forward Sam Bennett shortly after they began a brief rally in the third period by scoring two goals in a 21-second span.

Here’s a closer look at how things played out on Wednesday:

The Flames opened the scoring at 3:06 of the game on a goal by Troy Brouwer. In the recent past, this was the sort of goal that marked the beginning of a long night for the Lightning. However, a fight between Vladislav Namestnikov and Sam Bennett at 4:37 of the period sparked the Lightning and arguably changed the course of the game.

When Dougie Hamilton high sticked Valtteri Filppula at 8:48 of the period, the Lightning got on the board with a Brian Boyle power play goal shortly after. He followed with his sixth goal of the season on a breakaway just under four minutes later. The Lightning ended the first frame by outshooting the Flames 9-7 in a physical battle to open the game. 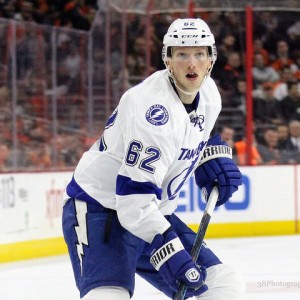 The Lightning secured a two-goal lead just 4;40 into the second period on Braydon Coburn’s first goal of the season. Things continued to move along at a chippy pace during the game as Matthew Tkachuk received a slashing penalty and Bishop went off for roughing in simultaneous calls.

The game kept a good pace during the period and Andrej Sustr tallied his first goal of 2016-17 at 18:47. He received a two-minute holding penalty with just under two minutes left in the period, putting the Flames on a power play. The Lightning outshot the Flames  12-8 in the second and carried a 4-1 lead into the final frame.

The Flames started the period by making a change between the pipes, as Brian Elliott replaced Chad Johnson. The Lightning continued on the penalty kill but Killorn made it a four-goal game just 37 seconds in. 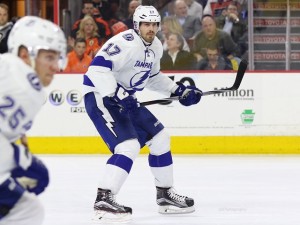 After Cedric Paquette took a slashing penalty, the Flames showed signs of life when TJ Brodie scored on the power play at 3:59 of the period. They struck again 21 seconds late as Micheal Ferland cut the Lightning’s lead to two goals on a cross-ice feed from Matt Stajan near the bottom of the faceoff circle near the Lightning’s net.

While the Lightning have had trouble in this position in games this season, they kept things under control and a big save by Ben Bishop on Calgary Flames forward Sam Bennett set the tone for the period.

The Lightning outshot the Flames 14-7 in the frame and with Elliott pulled for an extra attacker, Killorn tallied his second of the night to complete a three-point night with just 45 seconds left to play. The Lightning secured a 6-3 victory and an important two points in the standings.