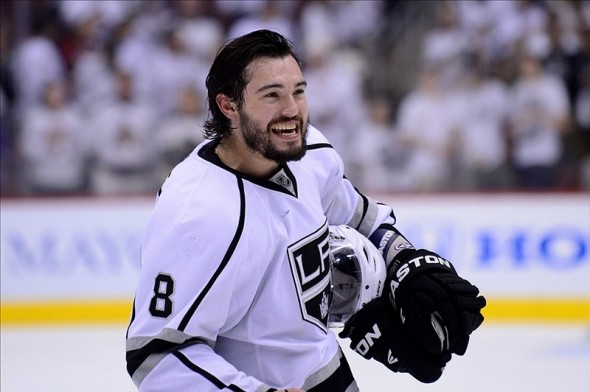 NEW YORK — Alain Vigneault knew the New York Rangers’ luck had to change as the Stanley Cup Final shifted across the country.  He just kew it.

“We seemed, in the first two games, to have a couple of those bounces not go our way,” Vigneault said of his team on Monday morning prior to Game 3.

“Things always even themselves out.”

But the bounces didn’t even out for the Rangers in Game 3 as Los Angeles skated into Madison Square Garden and posted a 3-0 shutout. In fact, they swung more in favor of the Kings.

New York carried the play in the first period — just as they have in every game this series — establishing sustained pressure in the offensive zone and using their speed to take advantage of the Kings’ defense.

None of that mattered though when Jeff Carter snuck a shot past Henrik Lundqvist with less than a second to go in the period:

“That was their only chance in the first period. We out chanced them 4 to 1. We had some real good looks. Stuff like that happens.”

The late goal sucked the life out of the home crowd heading into the intermission and the Rangers never gave the 18,006 on hand a reason to re-engage. Powerplay opportunities in the second period were squandered and the Kings went back to their old friend: good luck.

The finishing touch for the Kings came courtesy of Mike Richards, whose attempted pass landed back on his stick for an easy third goal.

The Rangers now face the nearly impossible task of reeling off four straight wins against Kings goalie Jonathan Quick, who probably played his best game of the playoffs in Game 3.

With New York struggling to generate quality opportunities in the slot, they’ve resorted to quantity over quality. 32 shots made it on goal Monday night and another 20 were blocked.  Quick kicked out big rebounds in the crease but the Rangers never capitalized on their opportunities.

“They found a way to put the puck past a real good goaltender,” Vigneault said, “and we couldn’t do it.”