On the ice, the Los Angeles Kings have won three games in a row, and 4 out of their last 5 to move them to within a point of 8th place in the West. Off the ice, the organization has made significant efforts towards raising money for the Kings Care Foundation, a non-profit charity that benefits children in the Greater Los Angeles area. It’s safe to say that the Los Angeles Kings are making positive strides no matter where you look lately.

Kings’ Turnaround On the Ice

Bernier has helped steady the Kings after a slow start. (Ric Tapia/Icon SMI)

After a deflating 3-2 loss to Detroit two weeks ago, Head Coach Darryl Sutter made it clear that his goaltenders were not doing the job. Jonathan Quick had gotten off to a very slow start and Jonathan Bernier hadn’t been given a significant chance to play yet. All Sutter wanted was one of his goalies to get hot to give the team a boost in the wake of slumps and injuries.

Fast forward through two weeks, and it’s a new world in the crease for Los Angeles. Just as Sutter requested, both Bernier and Quick have gotten hot, splitting the last 6 starts and combining for a 5-1 record. Bernier has gone 3-0 over the stretch, stopping 59 of 62 shots faced for a .952 save percentage. Meanwhile, Quick has turned up his game as well, going 2-1 with his only loss to the Chicago Blackhawks, who are still undefeated in regulation this season. Quick has turned aside 80 out of 85 shots faced for a .941 save percentage during this recent stretch.

Beyond the massive boost in goaltending, the Kings as a team are playing a complete game. They are averaging 3 goals per game and only allowing 1.33 goals per game over their 5-1 stretch. Jeff Carter continues to lead the way with a team-leading 9 goals. Additionally, role players like Trevor Lewis and Colin Fraser have finally gotten onto the scoresheet to add some much needed secondary scoring.  Even oft-maligned Dustin Penner is starting to see some improvements in his game.

Even with the team performing much better lately, there is still additional room for improvement which should excite Kings fans. Drew Doughty’s defense is improving, but he still hasn’t found the back of the net. As his offensive output inevitably increases, that will boost this team even further. Also, after starting the season with 11 of 15 games on the road, the Kings will now enjoy a home-heavy schedule with 20 of their final 33 at the Staples Center.

Things are certainly looking up for the Stanley Cup Champions as they continue to gain ground in the Western Conference.

Helping the Community off the Ice 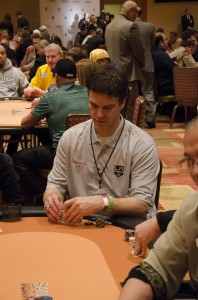 In the midst of finding their winning ways on the ice, the organization has also put time into charitable efforts off the ice. Last week, the Los Angeles Kings and their ECHL affiliate, the Ontario Reign, hosted the “Kings-Reign Royal Poker Shootout” where fans had the chance to play poker along with some all-time Kings’ greats. Former player and current President of Business Operations Luc Robitaille joined in on the fun with former player Bernie Nicholls, broadcaster Bob Miller, and Kings mascot Bailey among others.

The event raised money for the Kings Care Foundation which benefits children and families in the Greater Los Angeles area and the Hope Reigns Foundation which supports children and families within the Inland Empire. The Kings Care Foundation raised over $1 million for the community over the 2011-2012 season (pdf link) and will hopefully be just as successful this year despite the lockout-shortened season.

The entire team will add to the fundraising efforts on March 10th at “The Royal Feast.” All proceeds will benefit the Kings Care Foundation and their goal is to raise $150,000 on that night alone.

Let’s hope the Kings can continue their good work with charities off the ice and winning on the ice!