All season long, the Manitoba Moose have had a penchant for putting on stupendous efforts in their home rink and subpar efforts outside of it.

That trend certainly continued in their up-and-down February, in which they flirted with getting back into the Calder Cup Playoff picture. They went 5-1-0-0 at home but only 2-5-0-0 on the road for a combined 7-6-0-0 record. Overall, the team sits at 26-25-3-2 and in seventh place in the Central Division.

The Moose began the month with game four of a six-game road trip that had been interrupted by AHL All-Star festivities. First, they avenged an embarrassing 8-2 defeat at the hands of the Milwaukee Admirals in late January with a 3-2 overtime victory on Feb. 1. Jansen Harkins, continuing to build off his strong January, banged in a rebound generated by a Tucker Poolman shot at 3:10 of the extra frame to get the month started off right. 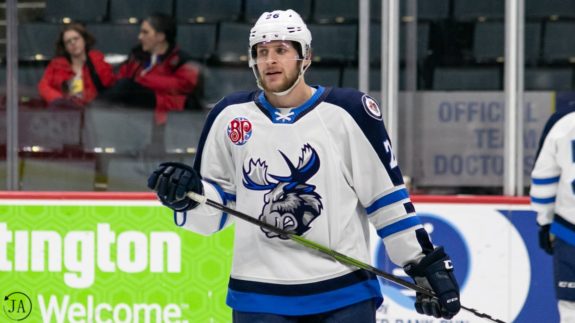 The next day, the Moose faced the Chicago Wolves and fell 5-2. However, the game was notable for an exceedingly odd goal: alternate captain JC Lipon scored a shorthanded goal on a dump-in from his own end of the ice.

In the final game of the road trip — the 100th all-time matchup between the Moose and the Grand Rapids Griffins — the Moose tried to  nurse a 1-0 second-period lead all the way to the final horn. However, in the last three minutes, captain Peter Stoykewich and Tucker Poolman took back-to-back penalties and the Griffins pulled their goalie to go up six-on-three.

Griffins’ forward Filip Hronek scored with 1:21 to tie the game, then again with just 25 seconds left to give his team a 2-1 victory.  The total collapse meant — nearly unthinkably — that the Moose left without a point despite being less than two minutes from a shutout. 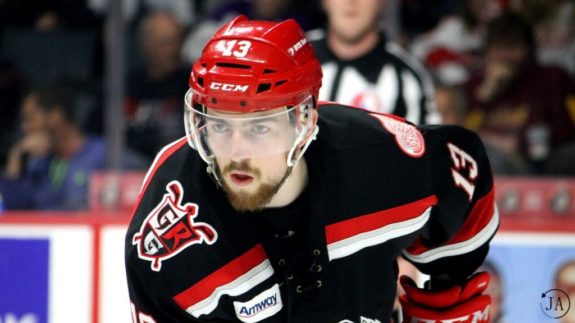 The Griffin’s Filip Hronek scored a pair of power play goals in the last 1:21 of the game to hand the Moose a shocking 2-1 defeat. (Jenae Anderson / The Hockey Writers)

Overall, they went 1-3-2-0 on their road trip, capturing just four of a possible 12 points. The loss also put an end to Seth Griffith’s 11-game point streak, in which he recorded one goal and 14 assists.

Shooting for the Stars

The Moose then returned to Bell MTS Place for a six-game homestand, where they’d gone 7-0-1-0 since Christmas. Their first visitor was the Texas Stars, who came into the two-game set losers of seven of their past 10.

On Feb. 9, the Moose’s Multicultural Night, they got three goals from players of three different nationalities — Canadian Skyler McKenzie, American Tucker Poolman and Slovakian Marko Dano — as they erased a 2-0 deficit and captured a 3-2 victory. 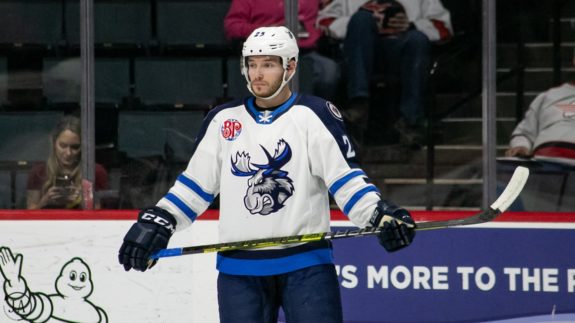 Slovakian Marko Dano was one of three goal scorers for the Moose in a come-from-behind victory on their Multicultural Night. (Jenae Anderson / The Hockey Writers)

The following afternoon was the Moose’s annual Polar Bear Jersey Day. While they didn’t maul the Stars by any means, they scratched out a tight 2-0 victory thanks to Logan Shaw’s 20th goal of the season and a 34-save shutout from athletic and flashy goaltender Mikhail Berdin who made the sixth start of his AHL career and first since being recalled from the ECHL’s Jacksonville Icemen on Feb. 7.

#MBMoose WIN!! Shaw's 20th of the season and an empty netter for Griffith to close out the weekend series sweeeeep over the Texas Stars. Thanks coming out to support #PolarBearJerseyDay

The Moose then welcomed AHL-leading scorer Daniel Carr and his high-octane Wolves squad to Bell MTS Place. The games were must-wins as Moose continued to try to push their way back into the playoff picture. Their performance on Feb. 13 looked as though they knew how critical the pair of matchups were, as they turned in one of their most complete performances of the season in a 4-2 win, and were powered by a two-point night from Michael Spacek. 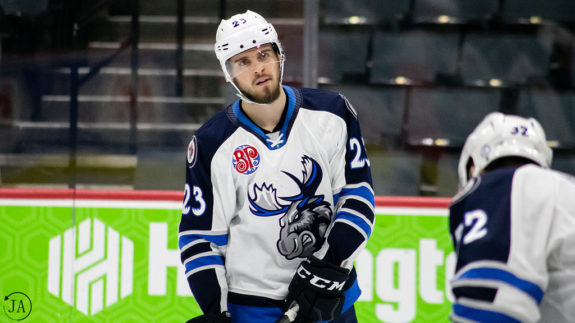 Michael Spacek snapped a six-game pointless streak with a goal and an assist in a 4-2 win against the Chicago Wolves. (Jenae Anderson / The Hockey Writers)

In the Feb. 15 rematch, the Wolves gave the Moose all they could handle, but the home side came out on top by 3-2 score thanks to a two-point effort from Griffith and 38 saves from Eric Comrie, who did his best impression of a brick wall. The sweep of the Wolves pushed their home point streak to an eye-popping dozen.

The stretch of crucial games continued as the Admirals — who were just ahead of the Moose in the standings — rolled in for Sunday and holiday Monday matinees.

In the former, the Moose fell behind 5-2 in the second period as the Admirals tallied three straight. They exhibited good push back in the third and cut the Admirals’ lead to 5-4, but eventually fell 6-5 in their first home regulation loss in 2019. Lipon, Skyler McKenzie and Cameron Schilling all had multi-point games. 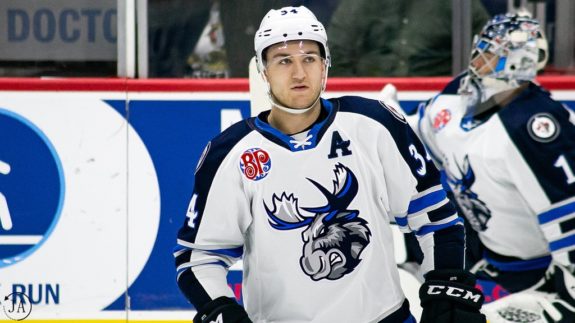 The next day was the team’s annual Super Hero Day. The battle was epic, with plenty of extracurriculars, but the hometown heroes vanquished their “villainous” visitors by a 3-2 score and pulled within three points of a playoff spot. Mikhail Berdin was especially super, stopping 29 shots and 13 in the third alone when the Admirals were pressing.

Shaw scored his team-leading 21st and 22nd goals (although his 22nd came as a result of being credited as the last Moose to touch the puck prior to an Admirals own goal when goaltender Tom McCollum was pulled late in the third.)

“Sometimes they come and they’re pretty like that one there,” Shaw joked when asked by a reporter, tongue-in-cheek, about his “end-to-end rush through the entire team.”

The Moose then headed east for the first four games of a six-game road stretch against Canadian opponents, but unfortunately, their road struggles continued. They headed into the first game —a Wednesday morning match with the Toronto Marlies — just 7-13-4 on the season away from home. 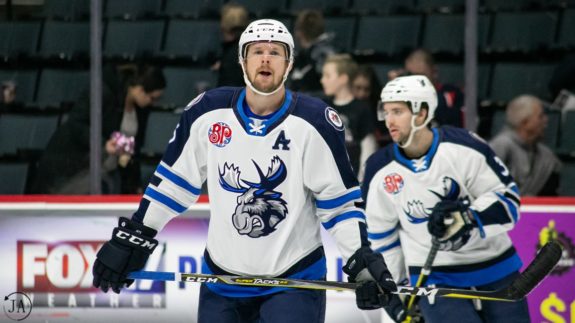 The Moose have had road woes all season long. (Jenae Anderson / The Hockey Writers)

They looked like they hadn’t had their coffee and sleepwalked through the first two periods against the defending Calder Cup champions, falling behind 4-1. They woke up in the third and Shaw and Nelson Nogier tallied late goals with an extra attacker, but it was too little, too late as they took a 4-3 loss to kick off the trip.

The Moose then headed to Quebec for Friday night and Saturday afternoon games against the Laval Rocket. The Moose fired a combined 56 shots at Rocket goaltenders Michael McNiven and Charlie Lindgren over the two contests, but managed to score just a single goal, falling 3-0 and 3-1, respectively.

The Moose wrapped up their month by trekking back to Toronto for another Wednesday matinee versus the Marlies. The game saw the return of Tucker Poolman, who’d been recalled by the Winnipeg Jets on Feb. 19 but didn’t see any game action, and Mason Appleton, who’d been with the Jets since late November and tallied 10 points in 36 games.

Both were reassigned after the Jets acquired Par Lindholm, Nathan Beaulieu and Bogdan Kiselevich in a flurry of deadline day moves. Captain Peter Stoykewich, who’d missed the past eight games with a concussion, already returned to the fold. 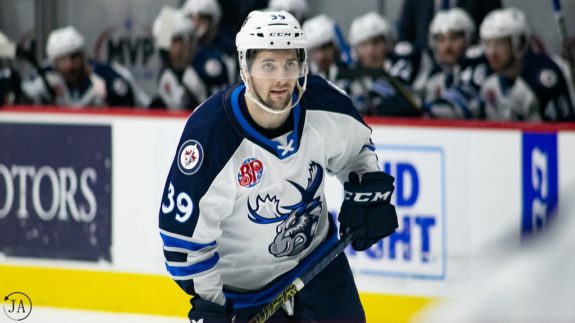 The Moose built up an early 2-0 lead thanks to goals from Griffith and Dano, but the Marlies fought back to tie the game 2-2 by the mid-second. The score remained that way through the majority of the third period and looked destined for overtime. However, with just 33 seconds left, Griffith played the hero. He banged in his second goal of the game after Spacek drove the puck to the net to give his team their first victory of the road trip and push their record above .500.

Coming off a month where he tallied 12 apples and 13 points, Griffith continued to be a dish master and showcase his high levels of offensive intelligence and adept passing ability. The veteran tallied seven more assists in February and added four goals for good measure. His two-goal effort on Feb. 27 put him back in the team lead with 41 points.

The 25-year-old defenseman was the Moose’s most reliable — if not flat-out best — blueliner in his 10 games this month. He logged heavy minutes, both at even strength and on special teams, and made calm, collected and correct reads. 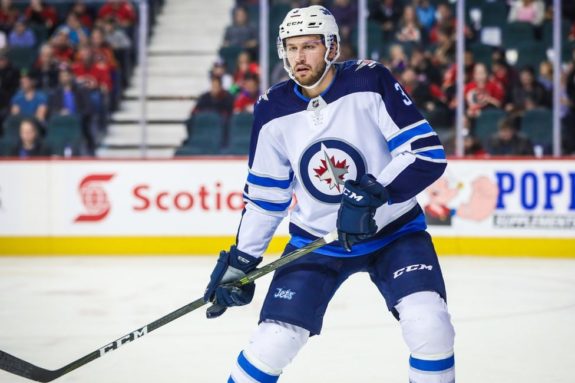 Tucker Poolman was the Moose’s sturdiest defenseman and admirably handled heavy minutes prior to his recall. (Sergei Belski-USA TODAY Sports)

Poolman tallied one goal and nine assists for 10 points and had an eight-game point streak between Feb. 1 and Feb. 17.

The sharp-shooting Shaw has been, along with linemate Griffith, one of the team’s steadiest producers throughout the season. The past month was no exception. 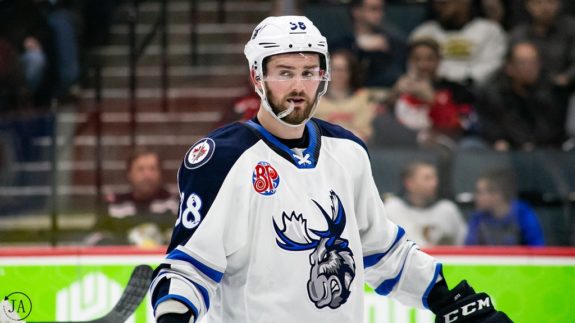 Shaw, thanks to his nose for the net, scored five goals and added five assists for 10 points. He leads the Moose in goals with 23 and is second on the team in points with 40.

The Moose are still outside the playoff picture, but not by far — they are only four points behind the Rockford IceHogs for the fourth and final spot with two games in hand and 20 left in total. If they hope to catch up, they will have to make hay during their frenetic March — they’re slated to play 13 games and four back-to-backs.

They’ll begin by finishing their six-game Canadian road trip with a pair against the Belleville Senators on March 1 and 2. Then they’ll have an entire week off before kicking off a six-game home stand between March 9 and March 19. The first four games are pairs against Central Division foes — the IceHogs and Stars — and the last two against the Pacific Division’s San Diego Gulls.

After that, they’ll hit the road for match ups against the Colorado Eagles on March 22 and 23. To close out the month, they’ll head down to Texas for three more divisional match ups — one against the Stars before a pair against the San Antonio Rampage.