From the Broad Street Bullies, to the modern day Philadelphia Flyers, the Toronto Maple Leafs have always found trade partners in the form of their Eastern Conference foes.

While there hasn’t been any action between the two teams since mid-2012, the two teams have had their fair share of dealings over the years. While we’ll only be looking at the five most recent trades between the Maple Leafs and Flyers, we will be going all the way back to 1995 to do so.

With that in mind, here’s a look at the five most recent deals between the two franchises.

Consider it a multi-year rental, but on June 23, 2012, the Maple Leafs acquired forward James van Riemsdyk from the Flyers in exchange for defenceman Luke Schenn.

A fifth overall pick for Toronto in 2008, Schenn played four seasons for the Maple Leafs – debuting in 2008-09. While he’s never been known for his offence, his longevity and physical play is what made him stand out as a big, bruising defenceman.

With the Maple Leafs, Schenn played 310 regular season games and tallied 75 points over that span. He averaged just over 19 minutes per game and finished with 898 hits.

Following the trade, Schenn spent the next three and a half years with the Flyers. There he tallied 42 points in 213 regular season games while averaging about a minute less than he did in Toronto. He got his first taste of playoff action in Philadelphia in 2013-14, playing in just seven games before the Flyers were knocked out.

When free agency opened for van Riemsdyk during 2018, the 29-year-old signed back with the Flyers for another go with the orange and black.

Prior to the van Riemsdyk deal, we have to go back to Feb. 14, 2011, to find the second most recent trade between the Maple Leafs and Flyers. On that day, the Leafs acquired a 2011 first-round pick and a 2011 third-round pick in exchange for forward Kris Versteeg.

Versteeg played just 53 games for the Maple Leafs in 2010-11, tallying 14 goals and 35 points before he was shipped to Philadelphia where he finished the year and picked up 11 points in the 27 games he played with the Flyers.

With the picks, the Maple Leafs picked up Stuart Percy with the 25th overall selection in 2011 and current Leaf forward Josh Leivo with the 85th overall pick. 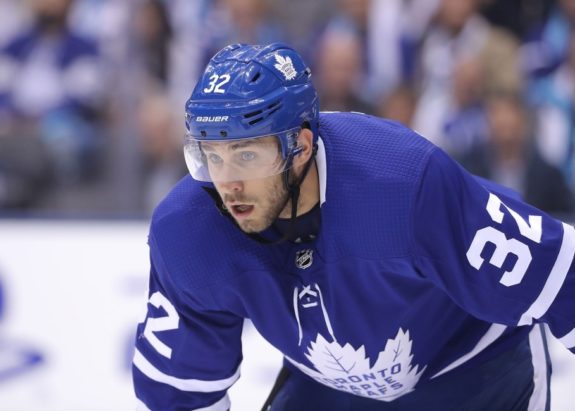 Josh Leivo came over in a deal that saw the Flyers get Kris Versteeg. (Tom Szczerbowski-USA TODAY Sports)

Percy got into 12 games for the Maple Leafs over two seasons, but never really cut it in the NHL. Since then he’s played with three separate AHL teams – including the Belleville Senators in 2018-19.

As for Leivo, he’s had his own rough go in Toronto, but has secured a full-time spot in the Maple Leafs’ lineup this season. In 72 games over parts of six seasons, Leivo has 11 goals and 25 points while averaging just under 11 minutes per game.

To a lesser extent than the previous two trades, the Maple Leafs acquired Regan Kelly on Sept. 26, 2000, in exchange for Chris McAllister.

Kelly played with the St. John’s Maple Leafs of the AHL from 2002 to 2005, but fell off the map shortly after – spending the tail end of his career in Italy playing for Milan.

As for McAllister, he played 56 games in Toronto with five assists to show for it before they moved him to Philadelphia. With the Flyers, he played 121 games over three seasons and tallied nine points averaging just over 10 minutes of ice-time.

Vying for a Veteran

Yushkevich went on to play 506 regular season games for the Maple Leafs over seven seasons, collecting 25 goals and 135 points and averaging over 23 minutes per game. He was a major piece on their blue line during their late-90s and early-2000 playoff runs, but would eventually finish his career back in Philadelphia in 2002-03.

As for the pick, the Maple Leafs used the 50th overall selection in 1996 to take goaltender Francis Larivee. Larivee played in the AHL, IHL and ECHL, but never made the jump to the NHL.

As for the three picks the Flyers grabbed, they used the first-round pick to take Dainius Zubrus 15th overall. He played 200 games for the Flyers over three seasons and collected 62 points while playing a depth role up front. He went on to play in almost 1,300 regular season NHL games.

The fourth-round pick in 1996 was traded by the Flyers and the Los Angeles Kings eventually used it to take Mikael Simons with the 84th overall pick. However, he never made it to the NHL either.

The Flyers did use the 1997 second-round pick to take Jean-Marc Pelletier with the 30th overall pick. The goaltender appeared in one game for the Flyers in 1998-99 and six more with the Phoenix Coyotes, but never had an NHL impact.

Finally, the fifth most recent deal between these clubs came just over a month before the Yushkevich trade, when the Maple Leafs acquired Rob Zettler for a fifth-round pick in 1996 on July 8, 1995.

Zettler, who tallied five points in 65 games over two seasons with the Flyers, had 22 in 136 games for the Maple Leafs. He also collected 207 penalty minutes in a Leafs uniform.

As for the pick, the Flyers used the 124th overall pick in 1996 to take goaltender Per-Ragnar Bergkvist. However, he never made the jump to North America and couldn’t crack the NHL.

All trades considered, was there any clear winners or losers? Be sure to have your say by leaving your thoughts in the comment section below, or tune in next time when we look at the five most recent deals between the Maple Leafs and Pittsburgh Penguins.