The Toronto Maple Leafs need all the help they can get as they push for the postseason. With 15 or so games remaining, the Leafs are sitting in the second wild card spot, a place no one expected them to be in at this point in time.

This year was supposed to be a rebuilding year. The Leafs are still officially in the second year of their roster turnover. Fans understood that this would be a year filled with young players, but no one could have predicted how they would react to the NHL.

It’s safe to say now that they have taken the team and the league by storm and are showing no signs of slowing down as the stretch run approaches. That’s good for the Leafs because if they want to make the playoffs, they will need every member of the team firing on all cylinders.

Since Morgan Rielly was drafted back in 2012, expectations were sky high for the young defenseman. He was an offensive defenseman playing in Moose Jaw, the type of player who could use his speed and shot to make rushes up the ice.

Rielly was the highest defenseman drafted in recent memory since Luke Schenn back in 2008. That immediately set an expectation that Rielly would be a stud. The first couple years of his career, Rielly was just that. He was able to rush the puck and score some incredible goals. He was a constant offensive threat, but not much of a defensive zone presence.

When Mike Babcock took over the head coaching duties last season, he saw immense potential in Rielly. With some hard work, he believed that Rielly could be turned into a number one defenseman.

Babcock said he really liked Morgan Rielly's game vs. Philly. "Mo, to me, is our best D and our most important guy back there."

In order to reach such levels, Babcock has put Rielly into tough situations this season including playing him against the other team’s top lines most nights. In regards to this playing time, there have been ups and downs as the young defenseman learns how to handle increases in competition and minutes.

The former Moose Jaw Warrior was then sidelined by a high ankle sprain that kept him out of the lineup for six games. When he returned, you could tell that he had lost his edge and was desperately trying to get himself back up to speed.

Despite not missing a game since coming back from injury, Rielly is clearly playing hurt. The effects of the high ankle sprain have slowed his mobility and have made it tough for him to play his usual game.

Despite this, Rielly is still a great defenseman and is possibly the best that the Leafs have. He is definitely going through a rough patch in the second half of this season, however. He’s young and talented and with the support of his teammates and coaches, he should work himself out of it. 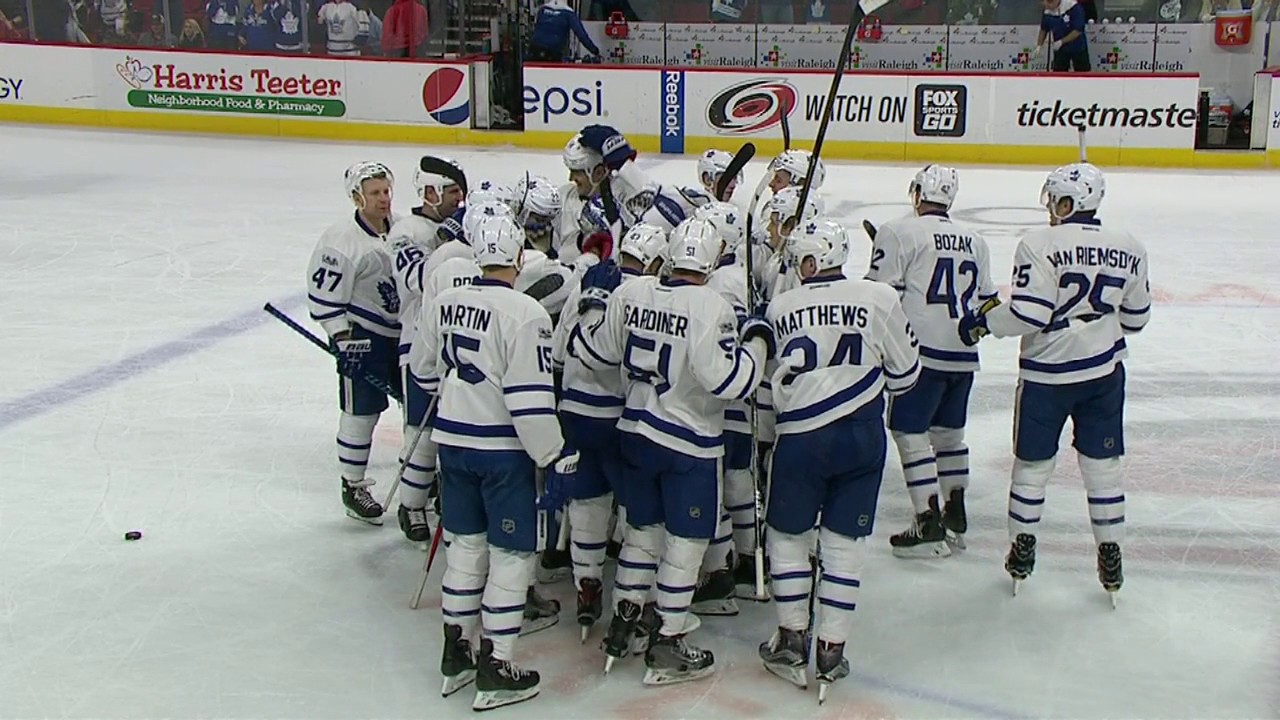 This is why it’s great to have a coach like Babcock in your corner. He realizes what Rielly can do if he’s performing in peak condition. It’s just a matter of getting him back to that level.

Frederik Andersen, early in the season, is a perfect example of such a comeback. In his first handful of games, Andersen was well below average. Babcock didn’t have a knee-jerk reaction, though. Instead, he supported him and continued to give him starts. Andersen is now one of the main reasons that the Leafs are fighting for a playoff berth.

Rielly’s play will turn around. Yes, he hasn’t been great in the defensive zone and his positioning has left much to be desired. He’s in a bit of a slump, but scoring the overtime winner against the Hurricanes will certainly go a long way to help him recover his confidence.

Rielly is a talented player. He just needs to find his groove again.

College hockey teams in the United States are gearing up for playoff runs. As these colleges get knocked out of contention, the window to begin signing their players starts.

For example, the Chicago Blackhawks have already been busy and have dipped into the market, signing John Hayden out of Yale and Miami University’s, Anthony Louis.

The Maple Leafs are reported to have interest in defender, Josh Healey. The hard-hitting defenseman is playing with The Ohio State University Buckeyes. They will be taking on the Michigan State Spartans in a quarterfinal matchup this coming Thursday.

pic.twitter.com/oDhiSaG2wM RT @gopherstate Josh Healey has been suspended two games for his blindside hit of Darian Romanko on Saturday.

There’s no guarantee a player will make it to the NHL, but college free agency is usually a cheap alternative to fill out some depth for big league teams. Every once in a while, an organization might hit a gem or two.

The Leafs are a perfect example. Back in 2009, they signed a pair of players out of college. The first was Christian Hanson, a forward out of Notre Dame.  He played a grand total of 42 games for the Leafs and scored three goals and nine total points.

On the flip side, the second player they picked up was Tyler Bozak from the University of Denver. The Regina native has gone on to play almost 500 NHL games and has piled up 313 points in that span.

Signing Healey would be a nice addition to the Leafs’ prospect depth. For a team that is often criticized for having defensive issues, any potential solution is a good one to check.  If he’s acquired, he may even be lucky enough to slot in a game or two down the stretch run for the playoffs.