It was Oct. 26 of last year and the Ottawa Senators were in Chicago to take on the Blackhawks. Unbeaten in regulation the past five games (4-0-1), the Senators were looking to keep the streak alive as they continued to have a promising start to the season.

Despite their best efforts, the Senators couldn’t manage to get more than one past Blackhawks goalie Scott Darling, who was playing his first ever game in the NHL at age 26. At the end of 60 minutes, Darling took home his first career win.

Mark Stone was watching from afar in the press box.

Like many players who have turned out to be key assets in the Senators’ resurrected season, Stone also had to face the unwarranted criticism of being a healthy scratch. Mike Hoffman, the team’s leading goal scorer, and Patrick Wiercioch, arguably only second to Erik Karlsson when it comes to Senators’ defensemen, have both been scratched from the lineup multiple times this season. Poor player evaluation has taken its toll on the Senators this season.

But like all great talents, Stone proved his worth. Over and over again.

Year of the Stone

2015 has been kind to Stone, to say the least. Ever since New Year’s Day, he’s been amongst the league’s top scorers. 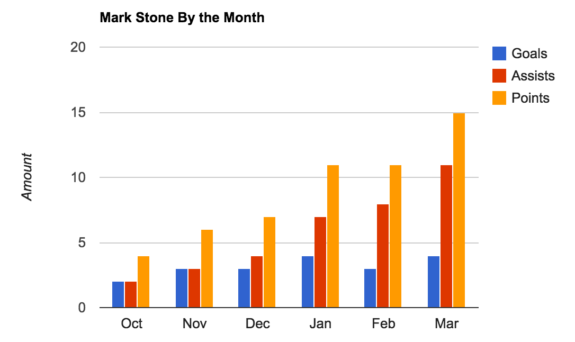 Dave Cameron should be highly praised for Stone’s success in the past few months. The 22-year-old didn’t just simply get better or find another gear when Cameron arrived after Paul MacLean’s firing. Stone was just finally being recognized as a legitimate top-six forward.

Stone’s distribution before and after the coaching change are night and day. MacLean neglected to realize the potential of the young right winger, but Cameron has refused to make the same mistake. 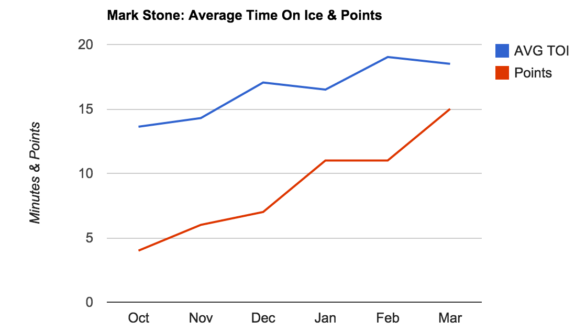 It may be a bit too late – Johnny Gaudreau and Filip Forsberg have been front runners for Rookie of the Year throughout the entire season – but Stone deserves serious Calder consideration. Of the three (Gaudreau, Forsberg and Stone), Stone has the highest points per 60 minutes played and he is also the only one to lead his team’s forwards in assists and points per game.

Even while recognizing the outstanding play of Andrew Hammond and the sheer brilliance that is Erik Karlsson, Stone might certainly be the Senators’ most valuable player during the second half of the season.

The Winnipeg native has 37 points in his last 38 games. At nearly a point per game pace, he’s been the team’s best forward, but it’s the timeliness of his production that has benefited the Senators’ late season playoff push the most.

Stone might not win the Calder this season, but it sure won’t be the last crack he has at a significant trophy.

He is currently tied with John Tavares for the league lead in takeaways with 91. Since the stat was first tracked in the 2005-06 season, no rookie has ever finished the year atop the takeaway leaderboard. And while stealing the puck may be impressive, giveaways should also be held at a minimum. But Stone is also second in the league for turnover plus-minus with a staggering plus-53, exhibiting his ability to be an impactful two-way player. He has a special knack for reading the play while on defense and seldom does he not make the right decision on offense.

With a hockey mind like no other, the Selke may be in reach for years to come. Though the award has become difficult for a winger to win – nine of the last winners being centres – Stone will find someway to steal it.