The NHL playoffs are not the only high stakes hockey happening in late May. From May 22nd to 31st, the winners of the OHL, WHL and QJMHL playoffs, plus the host team from Quebec City, battle it out for the Memorial Cup. The four teams competing this year are: the Kelowna Rockets, Rimouski Oceanic, host team Quebec Remparts and the Oshawa Generals. While each of these teams feature a number of highly touted prospects and draft eligible players – but no Connor McDavid – of particular interest to Ottawa Senators fans is the Generals because of their powerful right-winger Tobias Lindberg. After finishing 8th in OHL Playoff scoring, the Memorial Cup will give Senators fans the ability to watch Ottawa’s latest Swedish prospect perform on a national stage.

Getting to Know Tobias Lindberg

So who is Tobias Lindberg? Ottawa drafted him in the 4th round of the 2013 draft with the 102 overall pick. Incidentally, the same pick Ottawa got from the Tampa Bay Lightening in the Ben Bishop deal. So clearly if Lindberg succeeds, then Ottawa wins the Bishop deal. We do also know that he can score goals and put up points: 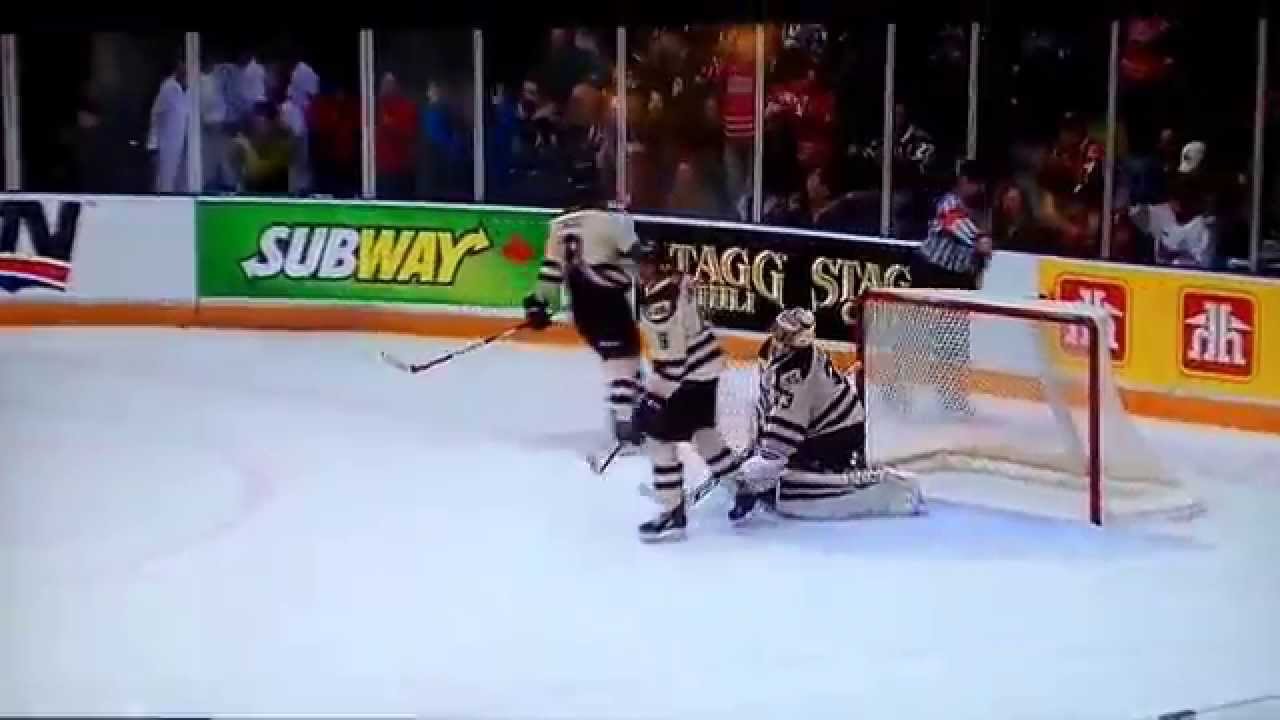 From a player who describes himself as a “pass first” type of guy, he has a pretty impressive shot. However, as Lindberg has demonstrated all year with the Generals, he has the ability to put up points while playing in all situations, including the penalty kill. He scored at slightly above a point per game in the regular season and slightly below a point per game in the playoffs and doing so on a Generals team that prioritized tight, team defense and managed to shut down scoring sensations Connor McDavid and Dylan Strome in the OHL finals. What is even more impressive though, is the growth in Lindberg’s offensive game. In his last two years in Sweden’s top junior league with Djurgården J20 he posted 22 points in 43 and 38 games respectively, while putting up one assist in eight games when called up to the parent club. His previous results certain make his current production a pleasant surprise for the Senators’ management.

Lindberg’s success this season may also have Senator’s scouts revisiting their assessment of him.  Immediately after the 2013 draft, scout Vaclav Burda identified Lindberg’s speed and size as assets while comparing him to Colin Greening. The Greening comparison may concern some people, but remember, the organization was much higher on Greening in 2013, especially after an excellent playoff series again the Penguins. Burda also recognized that the young Swede had room to develop and was not yet physically mature. Similarly, McKeen’s also points to his speed and physicality while also noting that he doesn’t have the high-end puck skills of high scoring teammates  Michael Dal Colle (NY Islanders) and Cole Cassels (Vancouver).

What the Future Holds

What then can Ottawa expect from Tobias Lindberg in the future? One thing is for certain and that is that the Memorial Cup will mark his final games in the CHL. He has proven he can perform in North America at the major junior level and Ottawa will be eager to see how his production translates to the AHL. If he can continue to produce at a high level, Lindberg could well feature quite prominently on the BSens roster given their lack of depth on the right-wing. Hockey Futures lists Lindberg as the top right-wing prospect in the entire Senators organization for good reason. Only Buddy Robinson and Cole Schneider are natural right wingers, and Robinson in particular has not been able to step into a scoring role with Binghamton. Lindberg’s performance next season will go a long way to determining whether he can continue to produce offense while playing with adults.

Looking beyond next season, Otawa’s top six forwards look reasonably set, with Bobby Ryan and Mark Stone playing on the right side for the foreseeable future. However, with Eric Condra likely moving on and Chris Neil’s contract expiring July 1st 2016, there will be room in the bottom six for a speedy and physical forward like Lindberg. It is likely that Cole Schneider will be given a chance first, given his offensive production this past year and his greater experience. But, if Lindberg can translate his game to the AHL over the next two years, look for him to be pushing for a spot with the Senators for the 2017-2018 season.