The Minnesota Wild knew this first-round series against the Dallas Stars was going to be a challenge, and Thursday night’s game was a painful reminder of just how out of out-of-place the Wild are in this match-up.

It was clear from puck drop that the Stars came to play, and the injury-ridden Wild didn’t. To Minnesota’s defense, three of the team’s most important players were missing from the lineup, but the lack of effort the Wild displayed in Game 1 was disheartening, nonetheless.

Luckily for the Wild, there are at least three more games in the series, and this team still has a chance to redeem itself over the next couple of days. There’s no guarantee the Wild will even win a  single game against the Stars, but they can at least go out with a bang, and Game 2 is the perfect time to start playing with some passion. If Minnesota takes the following three keys into consideration Saturday night, they might just have a chance.

Heading into Game 1, the Minnesota Wild knew they had to stay away from Dallas’ frighteningly good power play. That plan didn’t exactly work out too well for the Wild.

In the first period alone, the Wild found themselves a man down three times, and the march to the box didn’t stop after 20 minutes. 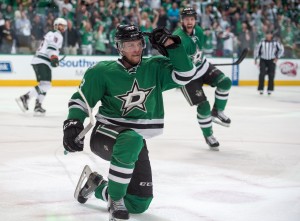 Throughout the remainder of the game, the Wild continued to take penalties, giving the Stars’ lethal power play chance after chance to score.

Minnesota already had enough trouble trying to keep Dallas from scoring, but continually giving them the man advantage only made things more difficult. Going into the playoffs, the Stars had the fourth-best power play percentage in the league at 22.1 percent. Compare that to Minnesota’s 77.9 percent penalty kill percentage – the third-worst in the league – and it’s clear the Wild were only digging themselves into a deeper hole Thursday night.

Sometimes penalties happen, and there’s nothing the team can do about it, but six penalties against one of the best power-play teams in the league is just unacceptable. If the Wild are going to have any chance the rest of this series, this team absolutely has to find a way to stay out of the box. This team has a hard enough time scoring 5-on-5. Playing with one less player on the ice for 12 minutes a game just isn’t going to work. Not to mention, this is one thing the Wild can pretty easily control.

Things got bad after a Jared Stoll turnover in the first period resulted in Stars’ first goal of the game. After that, Minnesota just didn’t seem to be able to keep it together.

Dallas is a talented team, and they’re going to take advantage of every little mistake the Wild make. That was very clear in Game 1. The Minnesota Wild have to be smart in Game 2. Stop the turnovers; stop the dump and chase. This team absolutely needs to hold onto the puck, because Dallas is not going to pass at an opportunity to steal it. Game 2 needs to see the Wild be a little bit more careful with their puck handling skills.

Game 1’s final 4-0 score does not do justice to how well Devan Dubnyk played in this first game.

The Wild’s goaltender played his heart out for 60 minutes, and unfortunately for him, the rest of his teammates didn’t do the same. Dubnyk made some amazing saves throughout this game – including a highlight-reel poke check on Ales Hemsky – to keep his team in it. However, Dubnyk and his stellar goaltending can’t win games alone if the rest of the team can’t score.

In Game 2, Dubnyk needs to continue to carry this team on his back. If the rest of the team can find a way to play with the same passion as Dubnyk, the Wild have a chance. Good goaltending is a huge component of teams that make deep runs in the postseason. Now don’t get me wrong, the Wild still have a lot to improve on if they’re even going to win a single game this series, but Dubnyk’s incredible play was a silver lining in Minnesota’s lackluster Game 1.

In Saturday night’s game, the Wild need to continue to rely on Dubnyk’s solid play, but the rest of the team needs to give him something to work with, as well.

The Minnesota Wild have their work cut out for them. Game 2 is not going to be easy, but with a few simple changes, this team might have a sliver of hope.