VANCOUVER — A pair of goals from Jason Zucker led the Minnesota Wild to a 3-2 win over the Vancouver Canucks Tuesday night.

The victory snapped the Wild’s three-game losing streak and extended a slump that has seen the Canucks post a single win in their last 13 outings.

Devan Dubnyk made 29 saves for the Wild and Anders Nilsson stopped 25-of-28 shots for the Canucks. 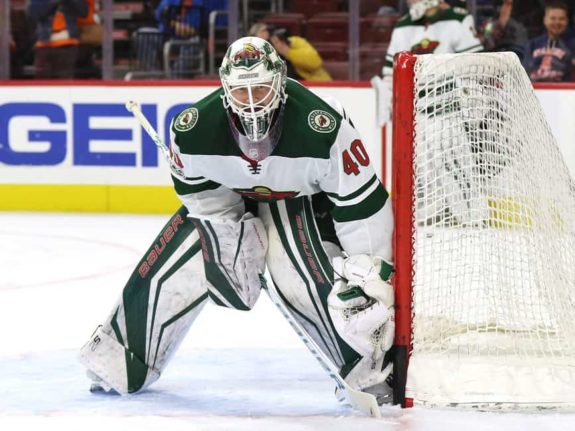 Leivo put Vancouver on the board 7:02 into the game, scoring on his first-ever shot in a Canucks uniform.

He collected a pass from rookie Elias Pettersson in the slot and flipped it over Dubnyk’s blocker to open the scoring.

The 25-year-old left winger was dealt to Vancouver from the Toronto Maple Leafs on Monday in exchange for AHL forward Michael Carcone. Leivo had four goals and two assists in 27 appearances for the Leafs this season.

The Wild responded to Leivo’s goal by netting one of their own on the first power play of the night after Canucks defenceman Michael Del Zotto was called for tripping.

Just 15 seconds into the penalty, Matt Dumba took a hard shot from the top of the faceoff circle and Parise deflected the puck in past Nilsson to tie the game.

The Canucks were slow to start in the second frame, going more than eight minutes without registering a single shot.

Vancouver eventually found some fire and the back of the net.

Tim Schaller got the puck to Motte in front of the Wild’s net and the centreman swept it in past Dubnyk.

Minnesota rallied back with a pair of power-play goals less than a minute apart.

Canucks defenceman Alex Edler was first to the penalty box, getting called for interference. A minute later, Del Zotto got caught cross-checking, handing the Wild a two-man advantage.

Minnesota was quick to capitalize with Ryan Suter taking a hard shot that Zucker tipped in.

Mikael Granlund had assists on both goals and is riding a three-game point streak.

Minnesota has 11 power-play goals in its last 10 games.

Meanwhile, Vancouver has spent 325 minutes in the penalty box this year, more than any other team in the league. The Canucks’ penalty kill was ranked 23rd in the NHL going into Tuesday’s game.

The second period of the game closed with a scuffle after Canucks left-winger Jake Virtanen was nailed hard from behind along the end boards by the Wild’s Greg Pateryn.

Virtanen was slow to get up and left the ice leaning over on his stick for support. He returned to the game early in the third period.

Pateryn was called for boarding.

The Canucks out-shot the Wild in the third frame, but couldn’t get the puck past Dubnyk.

The Canucks wrap up a five-game homestand on Thursday when they host the Nashville Predators.