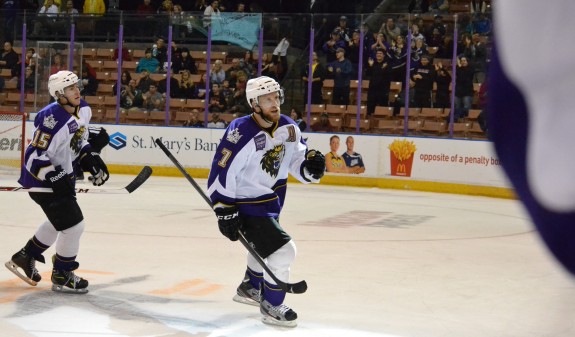 MANCHESTER, N.H. – Power play goals have come few and far between for the Monarchs this season, and that was apparent yesterday in the team’s 4-3 overtime loss to the Wilkes-Barre/Scranton Penguins Sunday afternoon at the Verizon Wireless Arena.

Manchester D Andrew Bodnarchuk blasted one from the point off a pass from Jordan Weal to tie the game at two in the final minute of the second period. Bodnarchuk’s goal was only the team’s third goal on the man advantage this season, a Monarch’s power play that is now only 3 for its’ last 32 opportunities.

For head coach Mark Morris, it’s something that the team has to continue to work on and fix, preferably sooner rather than later.

“We’re giving up goals on our power play,” Morris said. “That’s just a lack of focus from our defenders. We’re careless with the puck. On the power play, you’re a man up for a reason. You can’t be outworked by the other team, and for whatever strange reason our skill guys want to relax during that time and it’s costing us.”

“It’s always nice to get one,” Bodnarchuk said after the game. “Hopefully we can get rolling from here.”

Still, Morris saw a lot of good things from a team that refuses to lose in regulation. Despite being down on the scoreboard on three separate occasions Sunday afternoon, the Monarchs were able to find a way to pull even and force the game into extra time.

Something that Manchester has been known for through their first seven games of a young season.

“We saw some good things and we saw some bad things,” Morris said. “It was a typical Sunday afternoon game where we had some lapses that really hurt us in the end. We invited some of it in our own end, dragging the puck back and just some poor reads on our part. But we got a point out of it, it wasn’t our best effort, so we’ll learn from those situations.”

Still, breaking through on the power play was definitely a bright spot.

“We’re doing some good things but we’re inviting the problem by not executing,” Morris said. “The odd mental glitch is keeping us from keeping those close game into wins.”

Both Manchester and Wilkes-Barre/Scranton entered the game undefeated, the Penguins 5-0-0 with a 3-2 win over Worcester on Friday and the Monarchs at 4-0-2 with their 5-4 shootout victory over Providence in their home opener Friday night.

The Penguins struck first with a power play goal from Brian Gibbons, who ended the game with two goals and two assists and was Wilkes-Barre/Scranton’s eighth goal with the man advantage on the season. Gibbons found a rebound at an extreme angle and was able to bank it off Berube and into the back of the net for his third of the season.

The Monarchs answered with a goal of their own from Sean Backman, who scored his first goal of the season off a pass from Andy Andreoff towards the net which deflected off Backman’s stick and past Jeff Deslauriers.

Manchester’s special teams failed them once again in the second period, as they went 0-2 with the man advantage and allowed a goal just as their penalty kill expired, this time off the fast break which found Penguins’ Andrew Ebbott wide open in front of the net to put Wilkes-Barre/Scranton ahead once more.

Bodnarchuk’s goal tied the game at 2-2 in the final minute of the second.

“We’ve been talking a little bit, we just got to get more shots to the net,” Bodnarchuk said. “We had a couple of short handed goals scored against us the past couple of games. You can’t get outworked on the power play, you can loosen up at any time. There are some speedy killers in this league and if they can jump on it they will.”

Gibbons scored his second of the game a little more than 5 minutes into the third to put the Monarchs, once again, ahead by one. The Penguins center ended the game with a hand in all four goals for Wilkes-Barre Scranton.

In the final five minutes of the third period, the Monarchs continued to do what they do best – find ways to stay in the game. Manchester defenseman Nick Deslauriers finished off a break down the ice with a backhand over the blocker of the Penguins goaltender to tie the game at 3-3.

That goal gave the Monarchs momentum, who kept the puck buzzing in the Penguins zone but couldn’t find the back of the net. And it didn’t take long in overtime, as the Penguins scored 22 seconds into the extra period off a fast break from Brendan Mikkelson up the middle for the game winner.

Wilkes-Barre/Scranton stays undefeated at 6-0-0 this year. The Monarchs remain perfect in regulation, falling to 4-0-3 before their contest against Worcester on the road on Wednesday.

22-year-old goaltender Jean-Francois Berube looked rusty in his first start of the season for Manchester, making 19 saves and allowing four goals for the Monarchs in the loss.

“I thought he did his job,” Morris said. “We could have played better in front of him.”

Morris knows his team can be better, despite the impressive record that the team shows in the standings.

“I’m proud of my guys, but I’m always going to demand more because I know there’s more in there,” Morris said. “We’re making too many mental mistakes to pull it out and when we have a little experience under our belt…sometimes you have to have these pitfalls and glitches that you have to work through. You can’t teach experience.”

And if a pitfall for the Monarchs means a point in the standings, Morris and rest of the team will take it every day of the week.

Martin Jones will get the start for Manchester on Wednesday against the Sharks. They will then host a two-game home stand on Friday and Saturday against St. Johns to round out the week.

NOTES: It was Manchester’s sixth game in their first seven this season that the team has gone to extra time…The Monarchs remain undefeated at 4-0-3.