As analytics in hockey becomes a larger facet within the sport we are able to challenge notions we previously held as self-evident.  We can analyze scenarios, look at probabilities and try and maximize our opportunities to increase our chance of success.  One area that hockey analytics has not yet caught up is in drafting:, trying to moneypuck the draft to find the hidden gems that many other scouts and teams are overlooking.

This is an area of research that I am currently involved.  We know within the draft there is a heavy bias towards players that are bigger than others even regardless of their size (size normally refers to height rather than weight; the r^2 value of weight vs draft position is 0.03).  This is evident recently in the latest ISS Hockey Top 30 Draft Rankings where 6’4″ 0.74 points/game Lawson Crouse is ranked number 3, well ahead of Mitchell Marner, currently ranked number 9, and scoring over 2.14 points/game.  Marner has fallen in the rankings because he is a “small” 5’11”.

I scraped all the current players from each of the three Canadian Hockey Leagues as well as their height.  We analyzed these three leagues as they are the biggest pools of talent that the NHL draws its prospects from.  WHL data came from WHL.ca, OHL data came from OntarioHockeyLeague.com and QMJHL player heights came from TheQMJHL.ca.  NHL player data was also selected and it was found on Hockey-Reference.com.  With that said, here is some basic statistical information on the three leagues distributions of players heights.

Overall the distributions appear somewhat similar.  They are all normally distributed with similar skews but the kurtosis varies between the four leagues.  The median height for most leagues is 73 inches, except the WHL which is the shortest of the 4 leagues with a median height of 72 inches.  An F-test suggest that the OHL and QMJHL have a 0.6% and 4.9% probability of not being statistically similar to the NHL while the WHL has a 50% probability.

If we graph the relative frequency of height for players in all 4 leagues the resulting graph is as follows. 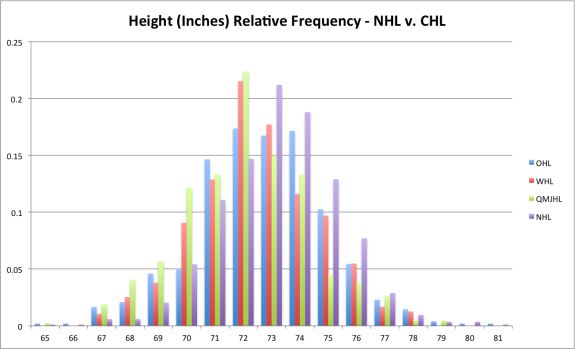 By overlaying the relative frequencies of the player’s height distribution we can see they are somewhat similar but there is a shift towards bigger players in the NHL.  This jump does not appear to be so massive that it could be residual effects of a number of different factors.

One possible option is that the shift is a result of the scouts and teams over-biasing larger players in the draft.  If a smaller player is not drafted it becomes harder for them to break into the NHL system  Another option is that the 16, 17, and sometimes the 18 year olds, in the CHL are still growing.  Puberty in young males starts between 11 and 12 and ends six years later.  Peak puberty growth is between 13 and 14 while your average 16 year old will grow 0.7 inches, and your average 17 year old will grow 0.35 inches.

Size does appear to be a highly prized in the NHL relative to the other leagues, but size does not stand out a wildly from the CHL as being taller is a requirement to play in the NHL.  Analytics has always suggested that if you have two prospects of equal talent, pick the bigger player.  But if you have two options, don’t focus only on their size.  This data does not seem to suggest that being shorter means your opportunities in the NHL are limited.  By how much does being shorter affects players, that is future work.