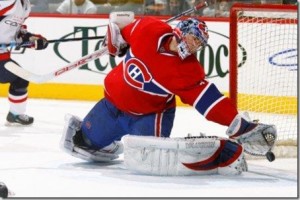 Carey Price makes a glove save vs. the Washington Capitals.

The Montreal Canadiens’ 2011/12 season will certainly go down as one of the worst in recent memory, as the team failed to reach the 80 point plateau for the just the second time this century, and missed the playoffs by a little more than a country mile. Mired in controversy and utterly uninspired for long stretches of the season, the team struggled to find its identity through a series of bizarre off-ice decisions, ultimately leading to the dismissal of enigmatic General Manager Pierre Gauthier.

But as fans of hockey’s most storied franchise watch this year’s post-season fireworks with pangs of envy, wondering what might have been, there are more than a few reasons to believe there is hope for 2013.

With time to heal, rest, train, and in some cases soul search (*coughScottGomezcough*), the Habs will look to build upon some of this season’s rare bright spots as they prepare to tackle what is sure to be a very long and reflective off-season.

With that in mind, I present to you my selections for the Montreal Canadiens end-of-season awards:

Any of Montreal’s top trio could make a case as the Canadiens’ best forward this season, with Erik Cole, Max Pacioretty, and David Desharnais all posting career years. But with all three putting up impressive offensive numbers, the race for best forward boils down to the one man whose presence clearly elevated the players around him to a higher level.

For that reason, Erik Cole earns the victory. In addition to his own stellar performance, the 6’2, 205lb left winger played a crucial role in the development and mentoring of Pacioretty, who missed the final stretch of 2011 with a devastating and potentially career-threatening neck injury. Fans will remember that Cole suffered a similar injury in 2006 as a member of the Carolina Hurricanes. So not only was Pacioretty able to learn the ropes as a legitimate NHL power forward from his new line-mate, but he also found inspiration in Cole’s ability to bounce back into a long and productive playing career.

Cole’s wealth of experience, Stanley Cup ring, and willingness to drive the net proved exemplary for a Canadiens squad lacking in veteran leadership this season, and skating with not one, but two hulking wingers opened up a lot of ice for the diminutive, but highly skilled Desharnais who broke out to lead the team with 44 assists. The net result was the Canadiens’ first season with two 30-goal men since Pierre Turgeon and Vincent Damphousse posted 38 apiece back in 1996.

With Andrei Markov sidelined for nearly the entire year, the Canadiens’ defence core appeared lost for long stretches of the season. Despite posting strong offensive numbers, PK Subban was less than consistent in his performance and often found himself on the wrong end of terribly ill-timed penalty calls. Raphael Diaz and Alexei Emelin both showed flashes of brilliance from the blue line, but still lack the confidence and consistency that comes with several years in the league, while Tomas Kaberle was…well, Tomas Kaberle.

As the team leader in plus/minus (at +14) and one of only two Montreal defencemen to finish the season with a plus rating, Josh Gorges was once again the model of consistency on the back end, making him the clear winner as the Habs’ top D-man.

Appearing in all 82 games this year following an injury-shortened 2010/11 campaign, Gorges led the league in blocked shots, voluntarily placing himself in front of more than 200 pucks. He also led all Canadiens in ice time, logging north of 22.30 per game to go along with 131 hits.

While his impact is not often seen on the score sheet, anyone who has spent significant time watching the Canadiens this season will tell you, Josh Gorges has been far and away the Canadiens’ most reliable defenceman.

While Louis Leblanc and Raphael Diaz both showed significant promise in their first NHL stints, it was the impactful Alexei Emelin who stood head and shoulders above all other Habs rookies in 2011/12. The freight train from Togliatti registered an astounding 236 hits in just 67 appearances, a pace which would have placed him 3rd in the National Hockey League over the course of a full 82 games.

The 6’2, 226 lb defenceman is already drawing comparisons to Hall of Famer Scott Stevens for his take-no-prisoners approach and hard-nosed defensive style. Perhaps most impressive, however, is Emelin’s ability to draw the line between physicality and dirty play. In a year in which suspensions sky-rocketed across the NHL, Emelin posted just 30 penalty minutes and spent no time whatsoever on conference calls with Brendan Shanahan.