This past weekend, 10 players with National Collegiate Hockey Conference Connections were drafted during the 2015 NHL Entry Draft in Tampa, Florida.

For those that like to make comparisons, last season, nine players representing six-of-eight NCHC teams were drafted in the 2014 NHL Entry Draft. One player with NCHC connections was taken during the first round of the NHL Draft North Dakota Nick Schmaltz (Chicago Blackhawks). 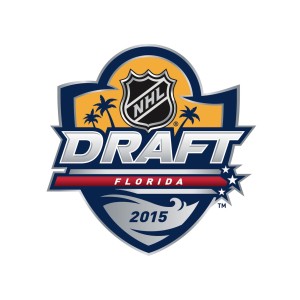 Two NCHC players taken in the first round

On day one of the 2015 NHL Entry Draft, two players with NCHC connections were taken during the first round. North Dakota incoming freshman forward Brock Boeser (Burnsville, MN)  was taken 23rd overall by the Vancouver Canucks.  (Elite Prospects Page)

On day two of the 2015 NHL Entry Draft, eight more players with NCHC connections were drafted by NHL teams. Here’s a breakdown of how the 2015 NHL Draft went for the NCHC.

In the fourth round, St. Cloud State Husky incoming freshman defenseman Will Borgen (Moorhead, MN) was drafted by the 92nd overall by the Buffalo Sabres. (Elite Prospects Page)

In the fifth round, future Miami RedHawk and current Green Bay Gamblers forward Karch Bachman (Wolcottville, IN) was drafted 132nd overall by the Florida Panthers. Bachman will join the RedHawks during the 2016-17 season. (Elite Prospects Page)

In the sixth round, future Nebraska-Omaha goaltender Kris Oldham (Anchorage, AK) was selected 153rd overall by the Tampa Bay Lightning. Oldham is set to join the Mavericks for the 2016-17 season. Oldham is currently with the Omaha Lancers of the United States Hockey League. (Elite Prospects Page)

Breaking down the numbers

Michigan led all schools with six players selected, followed by Boston College, Boston University, Minnesota, North Dakota and Wisconsin with four each. Among the programs with a recruit selected was Arizona State, which joins Division I this fall; Sun Devil recruit Joel Daccord, who will enroll in 2016, was selected by Ottawa in the seventh round.

Looking back at the 2015 NHL Draft, seven players with NCAA connections were taking during the first round. For the first time ever, three current NCAA division I players were drafted in the top-eight.