In a must-win game, the Devils came up with the outing they needed to cut their series deficit by one. They played with a sense of urgency they lacked in the first two games and got under the Lightning’s skin, forcing them to commit seven minor penalties. Here are a couple of takeaways from Monday’s 5-2 win that helped them get back in the series.

Schneider Steps up in a Big Way

After a successful relief appearance in Game 2, Cory Schneider found himself getting the nod for game 3. With the Devils needing no less than a win, Schneider delivered his best performance of the calendar year, making 34 saves to get the team right back in the series. It was his first win since Dec. 27 and the first time he recorded a save percentage above .900 in that stretch.

Schneider’s performance caught the attention of everyone around the Devils, especially his teammates. “[Brian Boyle] and I looked at each other halfway through the game and said to each other, ‘This is the Cory that we know,'” Blake Coleman told Steve Politi of NJ.com.

It was a return to form for Schneider, and he certainly wasn’t eased back into action. The Lightning fired 36 shots on goal to go along with a 16-7 edge in high-danger chances in all situations. To give you a better idea of the Lightning’s shot generation, the following heat map (via Natural Stat Trick) shows the location of their shot attempts at all strengths throughout the game. 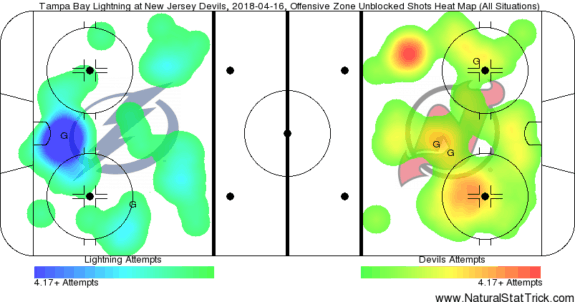 The way the map works is the darker the color is, the higher concentration of shot attempts. As you can see, the Lightning had most of their shot attempts come in the slot where the darker blue is most prevalent. Part of this was due to their power play, which was two for five on the night and generated four high-danger chances.

Despite the number of shots and chances the Lightning created, Schneider stood up to the task. He made the saves when the Devils needed it most, especially in the final two-plus minutes when they had to kill off a Lightning power play to seal the deal. If he can replicate that performance in game 4, the Devils will have a pretty good chance to tie the series up before they head back to Tampa Bay.

Related: The Devils Need Some Home-Cooking

While Schneider performed at an elite level, he couldn’t have won the game without the rest of his teammates. The most noteworthy performance came from potential Hart Trophy nominee, Taylor Hall — who led the team for the game with three points, six shots on goal, 10 shot attempts, and two scoring chances.

Hall’s performance was emblematic of his play in the regular season, which has carried over into the playoffs. He leads the team in points, shots on goal, shot attempts and scoring chances through the first three games of the series. It’s tough to imagine where the Devils would be without him and even though they’re still facing a series deficit, Hall played a significant role in reducing it to one game.

Although Hall’s performance led the way, Stefan Noesen and Will Butcher also stepped up to the plate late in the game. Butcher scored the game-tying goal on the power play in the third period, while Noesen scored what would eventually be the game-winning goal just a few minutes later. The Devils will need production from players such as Noesen and Butcher to continue if they want to have a chance going forward.

On defense, Travis Zajac did what he does best — he was only on the ice for six scoring chances against and was not on the ice for either one of the Lightning’s goals. He also logged a team-high 24:23 of ice time. The Devils needed a good individual defensive performance as much as they did on offense, and Zajac provided that Monday night.

If Hall, Zajac and the rest of the Devils supporting cast — along with Schneider — can repeat their game 3 performances, they should have a pretty good shot of making this a best-of-three by the time it heads back to Tampa Bay on Saturday. The Lightning may still be up a game, but the Devils now have new life heading into game 4. That’s all they could’ve asked for given how this series started.