That suits the Rangers just fine. They’ve been playing like underdogs for most of the season anyhow. Sitting in the middle of the East standings with a 45-31-6 record, no one gave much thought about the Ranger’s long term projection in the Playoffs. The Philadelphia Flyers, who had crawled out of the basement on their own accord under interim coach Craig Berube, were poised to make a nice, long run once they get past New York. That didn’t happen.

Against Sidney Crosby and the Pittsburgh Penguins? No chance for New York, right? This year, the Penguins were expected to go all the way, the operative word being “were.” Again, that didn’t happen thanks to Henrik Lunqvist’s heroics by Game Seven, and Sid’s lack of scoring (having only recorded one goal in the entire playoffs).

And when the Montreal Canadiens caused a playoff stir of their own by defeating the heavily favoured Boston Bruins in Round 2, many pundits still believed that Montreal had improved offensively (traded for Thomas Vanek), and they had a goaltending advantage through Carey Price who had backstopped Team Canada to a Gold Medal in Sochi. Even with the heroics of third string goalie Dustin Tokarski, the Habs were all but worn out. They ran into a team that had a veteran winner (Martin St. Louis), and a veteran backstopper (Lunqvist) who will finally cement his place in Rangers history by being part of the latest Cup Final, their first since 1994.

Between New York, LA and Montreal, it appears that trading for veteran leadership with Cup winning experience prevails over acquiring questionable hired guns, as explained in the Habs’ Vanek and LA’s Marian Gaborik. Marty St. Louis was the Rangers’ perfect final piece of the puzzle at the Trade Deadline.

Do They Have A Chance Against the West?

Hockey pundits contend that the Western Conference has been the strongest between the two Conferences for quite some time. The only real challenge from the East came from Boston, having won recently in 2011 against Vancouver. But having been eliminated earlier by Montreal, there really isn’t another Eastern team that could match up to the offensive caliber and defensive depth that the LA Kings and Chicago Blackhawks have. In the 2013-14 season, the Rangers surprisingly swept the Blackhawks, but split their series with the Kings. Even so, in terms of offensive talents between the three rosters, LA and Chicago have stacked theirs. They haven’t even named a captain yet since the former, Ryan Callahan, was traded to Tampa Bay.

In order to contend against the Kings or the Hawks, who’s going the X-Factor for New York?

It’s got to be King Henry.

Marty: The Sentimental Favorite for MVP

It has been a whirlwind of a year for St. Louis so far. First came the Team Canada snub, followed by a reversal when then-teammate Steven Stamkos went down with a broken leg. Next, because of ill feelings towards Lightning GM & Team Canada Executive Steve Yzerman, Marty demanded a trade only to New York and got it, with Callahan heading the other direction. This created a rift between St. Louis and the Lightning fanbase that could never be healed…

Then came the unexpected death of his mother. Marty was hurt, his family was hurt, and so were the Rangers. But it proved to be their rallying point and soon after the scoring piled up, the players played for each other, and under St. Louis’ guidance, the Rangers are awaiting the West finalists in the 2014 Stanley Cup Final. They make the perfect underdogs.

Former Canucks and current Rangers Coach Alain Vigneault will make his second Stanley Cup appearance, and hopefully he and his new team will have a successful outcome. In reference to coaching in Vancouver lore, Vigneault isn’t the first coach to have visited the Cup Final more than once. 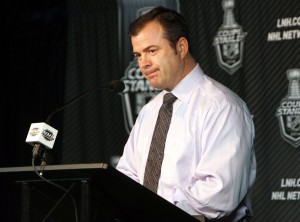 Pat Quinn went to the Final in 1980 with the Flyers who had the best regular season record (sound familiar, 2011?) but lost to the other New York team, the Islanders. With incredible irony, Quinn’s Canucks in 1994 weren’t supposed to be in the Final, but faced a Ranger team that was expected to win it all, and they barely did.

The Canuck/Ranger connection is endless. There have been many hearts broken by former players and coaches who have left Vancouver, so much so that it’s very numbing to think about it. Doug Lidster, a longtime stalwart on the defence with the Canucks won the Cup with the Rangers. Pavel Bure who bolted from the west coast towards the marshland maze of Florida ended his career in New York. Markus Naslund who was never the same since he got rail-roaded by Steve Moore in 2004, also finished his career in New York but without much fanfare.

Today, the only Canuck connection to New York is journeyman defenceman Raphael Diaz who started the season with Montreal, was traded to Vancouver and played only six games, and ended up in New York having only played three games so far in the postseason. Should Diaz score the Cup winning goal against either LA or Chicago, there’s going to be a lot of groaning and moaning out in the West Coast. 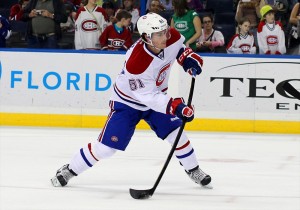