The year of 2011 is coming to an end. For some, it couldn’t have gone by any slower. Others don’t want it to end so soon. Either way, it’s still the time of year for celebration and looking back at all the great moments we’ve had. In the hockey world, there were many triumphant moments, and unfortunately, there were also many tragic ones. Now that we’re about to begin a new calendar year, it’s only fitting that us hockey fans remember all of the top stories from 2011. This article will hopefully bring back some great memories, and also let us remember some tremendously talented individuals that we lost. With that in mind, here were some of the top NHL stories from the past year:

The Jets Return To Winnipeg

On May 31st, 2011, the province of Manitoba was given the news they had been waiting to hear for over fifteen years. The National Hockey League was returning to Winnipeg. Earlier in the year, it had sounded like the Phoenix Coyotes would be coming back to where it all began. However, the springtime brought forward news that the Atlanta Thrashers were the team that would be relocated. True North Sports and Entertainment purchased the Thrashers for $170 million US, as well as a reported $60-million relocation fee. The city of Winnipeg began a party that still hasn’t stopped, and it doesn’t look like it’s slowing down any time soon. Fans of the former Winnipeg Jets filled the streets with tears of joy in their eyes, and True North Chairman Mark Chipman instantly became a local hero. After the Jets’ first exhibition game at the MTS Centre, head coach Claude Noel summed up the event that millions of Canadian fans were watching on television, saying:

“As soon as the anthem started, everybody sang. It just gave you goose bumps, like everybody was singing. It almost brought tears to your eyes. It was beautiful.”

For the first time since April 23rd, 1996, Winnipeg Jets fans were able to cheer on their own team. Almost all of Manitoba rejoiced, and Canadian hockey fans were right there with them.

The Year Of The Concussion

The National Hockey League is still suffering from the effects of concussions, almost exactly one year after it all began. January 1st, 2011, was the day the real-life horror movie started, and for Sidney Crosby, it still isn’t over. He was blindsided late in the second period by the Washington Capitals’ David Steckel (now with the Leafs), and he hasn’t been 100% since. Four nights later in Pittsburgh, Victor Hedman of the Tampa Bay Lightning checked Crosby hard into the glass, ending his season. Crosby would be sidelined for over ten months with concussion symptoms that included fatigue and an inability to tolerate loud noises. His return in November appeared to mark the end of the nightmare, yet as we now know, it’s definitely not over yet.

Sidney Crosby has become the centre of all hockey-related concussion discussions, but he certainly wasn’t the only hockey player concussed in 2011. The amount of names that have been forced off the ice because of head injuries is astounding. From superstars to minor league call-ups, pros from all over the hockey world have been affected by concussions this past year. The NHL is frantically trying to find ways to reduce them, but so far, we have to just keep watching as our favourite players get placed on the Injured Reserve. No player in the NHL is looking forward to the new year more than Crosby, and hockey fans from all over the globe are wishing for an end to one of the biggest issues the NHL has faced in a long time.

The summertime brought multiple cases of devastating news to hockey fans. Three of the NHL’s most beloved enforcers and grinders passed away. First it was Derek Boogaard of the New York Rangers, then it was Rick Rypien, who had recently signed with the Jets, and then former fan-favourite Wade Belak. All three of those deaths raised many questions, most of them starting with the word, “Why?”

When it seemed as if one of the most tragic off-season’s in hockey history couldn’t possibly get any worse, something even more horrible occurred. In one of the worst crashes in the history of professional sport, the entire Lokomotiv Yaroslavl KHL team was wiped out in a horrific plane crash. On September 7th, former NHLers Pavol Demitra, Alexander Karpovtsev, Igor Korolev, Brad McCrimmon, Karel Rachunek, Ruslan Salei, Karlis Skrastins, Josef Vasicek, and Alexander Vasyunov were those among the 43 killed in the crash. An investigation months later proved that the pilot accidentally hit the brakes during take-off, causing the plane to go too slow off the runway. The crash affected the entire hockey world, particularly the former teammates of those who passed away. It was without a doubt an off-season that no one wants to see again.

What was arguably the greatest season the Vancouver Canucks have ever had was spoiled by the riots that followed their loss in game seven of the Stanley Cup Final. As soon as the Boston Bruins won the league championship, the streets filled with angry protestors, rioters, and many who were just there to commit crimes. Absolute chaos ensued. There was broken glass everywhere. Cars were beaten and destroyed. Fights broke out for ridiculous reasons. Stores were looted of electronics, jewellery, and other valuable items. Though the Bruins won the cup that night, it isn’t remembered because of their victory. Sadly, it’s remembered by most as the night Vancouver rioted. For a city that had recently hosted a fantastic Olympics, it was one of the most embarrassing events in the history of Vancouver, and in the province of British Columbia.

Tim Thomas was the star of the series, and quite possibly the entire NHL season as well. He won both the Vezina Trophy as the NHL’s best goaltender, and the Conn Smythe Trophy as the playoffs’ most valuable player. Brad Marchand emerged as a rising star, and the tallest player in league history, Zdeno Chara, captained his team to victory. It was their first championship in 39 years, and can be considered the final chapter to Tim Thomas’ amazing comeback story.

Going into the draft, it was hard to pinpoint who would go first overall. Would it be Huberdeau, Landeskog, Larsson, or Nugent-Hopkins? One was the Memorial Cup MVP (Huberdeau), one was future NHL captain material (Landeskog), one was one of the greatest defenseman to come out of Sweden in years (Larsson), and one was a skinny little forward with amazing potential. They call him the “Nuge”, and he was the Edmonton Oilers’ first-overall selection in the 2011 NHL Draft. He was also known as that skinny little forward from the Red Deer Rebels.

Landeskog would go second to the Colorado Avalanche, Huberdeau third to the Florida Panthers, and Larsson would follow, going fourth overall to the New Jersey Devils. Rounding out the top ten were, in order, Ryan Strome, Mika Zibanejad, Mark Scheifele, Sean Couturier, Dougie Hamilton, and Jonas Brodin. The biggest surprise of the first round may have been the Jets’ first selection since their re-birth, as they selected Scheifele in the seven spot. He wasn’t even expected to go in the top twelve picks, but Winnipeg went out and surprised everyone in taking him so early. So far, it’s looking pretty good, and he scored his first NHL regular-season goal in Toronto against the Maple Leafs. It was a really deep draft class in 2011, and many of them will be full-time professionals someday. 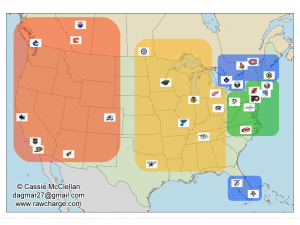 In early December, the league approved a new four-conference format that is expected to be implemented next season. When the Atlanta Thrashers moved to Winnipeg, it became clear that something needed to be changed in order to geographically correct the conferences. After much debate and discussion, the NHL’s Board of Governors came up with four new conferences. The top four teams in each conference would qualify for the playoffs. The names are expected to be changed (for obvious reasons).

As with any large change, some were happy, and some were not. Ottawa Senators forward Jason Spezza seemed to be fine with the decision, saying:

“As players, you want to see everybody, you want to go to every city,” said Jason Spezza. “I think that’s going to be a real positive.”

For those who are unhappy with the changes, Commissioner Gary Bettman said this about the realignment:

“This is not a subject that everybody is going to get their first choice on,” said Bettman. “What you try to do is come up with something that everybody can live with, get comfortable with and understand the value of. When you look at the map of North America, it’s not geographic perfection so we’re looking for something that makes the most sense and most fans and most clubs as comfortable as possible.”

One downside to the new plan is that there will be a lot of extra travelling for most teams. With every team visiting each city at least once throughout the season, there will be a lot more time on the road than players are used to. However, fans will likely be glad that they can see far-away teams more often than they have in the past.

There you have it. The top stories from the NHL in 2011. Winnipeg returned, Crosby was knocked out of action, tragedies occurred, championships were won, new careers began, and teams learned they’ll be shifting gears next season. Without a doubt it was a year that won’t be forgotten for a while. Now we can look forward to the next one, and dream of all the headlines we could see. Who’s going to win the Cup? Who’ll go first overall? Who’ll sign where in free agency? What will happen with Sidney Crosby? There’s no real way to predict these things, and that’s just what makes it fun to watch. Have a great 2012 everyone.