On Friday night, the NHL will hold its 50th NHL Draft (Amateur + Entry) and with that will come the 50th selection with the 5th overall pick.  The Toronto Maple Leafs currently hold that pick.  Many questions remain; Will Brian Burke hold onto the pick?  Will he trade the pick to move up or down in the draft? Will he include the pick in a deal for a proven player? These are just some of the questions that remain with the just under 24 hours remaining until the draft commences in Pittsburgh.

The last time they selected 5th overall, the Leafs traded up to select defenseman Luke Schenn.

Here are some facts about the history of the 5th overall selection. 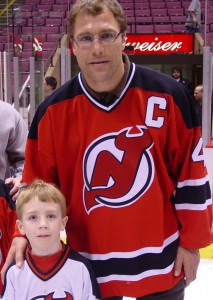 Teams that have selected 5th overall

Right Wing: 10 – Jaromir Jagr headlines Right Wingers selected in this spot.  He is by far the best 5th overall pick of all time.

Goaltender:  5 – Carey Price could end up being the best goalie of all time selected with the 5th pick.  Right now, it’s Tom Barrasso.

Where are they from?

Canada: 34 times a Canadian has been chosen 5th overall including 4 of the last 5 (Karl Alzner, Luke Schenn, Brayden Schenn, Ryan Strome).  The most successful Canadian 5th choice would have to be Scott Stevens from Kitchener, Ontario.

USA: 7 times an American was chosen at #5.  The last American to be chosen was current Toronto Maple Leafs winger, Phil Kessel out of the University of Minnesota.  Tom Barrasso who was selected with the 5th pick in 1983 is the only 5th pick to go on and win the Calder Memorial Trophy.

Czech Republic: Only 2 Czech players have ever been selected with the 5th pick, but they have played over 2300 games between them.  I would also say that the best 5th overall pick of all time was from the Czech Republic.  Jaromir Jagr has amassed 1653 points in just 1346 games which is good enough for 8th all-time and he is still playing.  The most surprising pick of all time might just have been Petr Svoboda as there was only one GM that knew Svoboda had defected to Canada.

Click here to view my top 10 5th overall picks of all time.