There has been so much talk about all the high-flying rookies this season, about Patrick Kane and how he dominates the league in scoring. The greatest and most praised players have gotten their well-deserved attention as the season matures. But what about the guys that play a phenomenal season as well, with the only difference that they are overshadowed by other players on the team? I have noted a couple of guys that play as great as they ever had and deserve praise as well. Let’s focus on those players, who are flying under the radar.

The Anaheim Ducks’ first-round selection from 2011 has been getting better and better. He is on pace to play his most productive season, just two points shy of topping his 31 points from last season. The Swedish forward has been much more than just an addition to the Ducks’ top line featuring Ryan Getzlaf and Corey Perry.

Rakell is a very hard-working forward who plays an excellent two-way game. He is the type of player who makes everyone around him better, even if it is not visible to everyone right away. He does a lot of small things right and is an intelligent forward. I would even go that far and say he can make Getzlaf and Perry more effective. I really do like to see those three players on the same line, although Bruce Boudreau splits them from time to time.

German-born Tobias Rieder plays in his second season with the Arizona Coyotes and has already combined for 33 points. He has left his home country Germany in 2010 and joined the Kitchener Rangers of the OHL where he wore an “A” in his last season. Rieder is playing a phenomenal season in the shadow of rookie sensation Max Domi. He is extremely valuable to coach Dave Tippett because of his versatility. He can nearly play in all game situations and is very adaptable.

Love this kid, but I don't think many know about him…
Anyway, Tobias Rieder (ARI) is 7th in FWD highest % of team's Shots on Goal (10%)

I would even describe him as one of the more underrated players in the league and he is a very effective penalty killer and is dangerous shorthanded as he uses his lightning quick speed and acceleration in breakaways. It is going to be Rieder’s most productive season, even though his production slowed down a bit as of late. He is going to face a tough last quarter of the season as the Coyotes dropped out of the playoffs and suffer from the injury that occurred to netminder Mike Smith.

While there are several Bruins’ with good numbers, including David Krejci and Brad Marchand, 24-year-old Ryan Spooner is having quite a year as well. Spooner really picked up the pace when he replaced Krejci at the center position and filled the gap of the Czech. It is going to be Spooner’s first full season with the Bruins after traveling from Boston to Providence and back a couple of times in the past two seasons. Spooner really elevated his game this season and becomes a reliable two-way center for Claude Julien’s team. He provides the team with more depth at the center position and makes ex-Bruin Carl Soderberg forgotten on the third line.

After posting 33 points in his rookie season last year, there is no sign of a sophomore slump in Rask’s play this season. He is already at 33 points again after 55 games and is flourishing into a key piece of the Carolina Hurricanes for their surprising run for the playoffs. Rask is a player who plays a good three-zone game and can be used in a lot of game situations.

Rask is quietly emerging into his role and the Hurricanes definitely know what they have in their second round pick from 2011. “He’s got a quiet confidence,” Captain Eric Staal said. “He plays the game at both ends of the rink and can make plays when called upon. He’s definitely one of those guys who can hopefully grow as a player and offensively continue to get better.”

Read: Rask up to the task

The Boston Bruins couldn’t match the salary expectations of Soderberg and therefore the Swede got traded to the Colorado Avalanche. I have to admit, I was skeptical about his move to the Avs and I was not sure if he could take on the bigger role in Colorado as he was mostly a third line center in Boston. 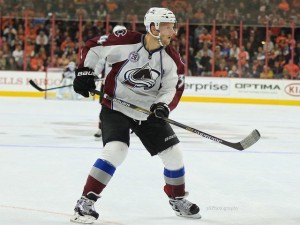 However, Soderberg fits in very well with the Avalanche and he is playing a real strong season, providing secondary scoring and playing big minutes. He has to fill the gap that Ryan O’Reilly left, not quite the easiest task on earth but Soderberg might succeed better than most imagined although of course he isn’t of the same caliber as O’Reilly.

Boston College product and former Hobey Baker finalist Cam Atkinson has been overshadowed by the arrival of Brandon Saad, who joined the team for this season after being traded by the Chicago Blackhawks this off-season. Atkinson will probably have his third consecutive season with 40+ points and is going to hit the 20-goal mark the third time in a row with his next goal.

He has emerged into a solid goal scorer for the Columbus Blue Jackets and shows some good chemistry with center Brandon Dubinsky. With the departure of Ryan Johansen, Atkinson could move into a more significant offensive role and could see his time on ice rise. He has a nose for the net and likes to fire the puck.

Swedish forward and Detroit’s third-round pick from the 2013 draft, Mattias Janmark, is another rookie that makes quite some noise. Of course, he is not getting the same attention as his high-flying fellow rookies and is flying under the radar being on the same team with Jamie Benn, Tyler Seguin and John Klingberg. However, Janmark plays often in the second or third line and delivered the Stars with secondary scoring, combining for 24 points. He really has picked up the play as of late and emerges into a regular scorer, notched a goal in each of his last three games.

Mattias Janmark is one of the best rookies in the NHL, read why in my latest – https://t.co/c8AYz7riyj #hockey #THW

The Stockholm, Sweden native played with eight games with the Grand Rapids Griffins before returning to the Swedish Hockey League for one last year. He was part of the Erik Cole deal between the Stars and Red Wings, and plays his first full season in North America now with the Dallas Stars.

The Florida Panthers are still sitting on top of the Atlantic Division. Surely a big reason why the Panthers are having such a strong season is their top line featuring Aleksander Barkov, Jonathan Huberdeau and Jaromir Jagr. This line has been buzzing whenever they played together, but the Panthers are that high in the standings also because of their secondary scoring. Vincent Trocheck, Jussi Jokinen and Reilly Smith have been excellent for the Panthers the entire season.

Trocheck, who is centering that line, has been hot since the start of the season and is having a breakout season. Finally, Trocheck got what he deserves and the NHL couldn’t ignore his performance any further and has selected him as the number three star the other week. The Pittsburgh native, however, dishes off credits for his success to his linemate Jokinen: “Jussi is so underrated and such a smart player,” he said. “He can do it all. Playing with him makes it a lot easier on me and Smith. He knows where to be. He’s always in the right position and will help us when we need it.”

German born and long-time NHL-backup goalie Thomas Greiss is secretly becoming the number one netminder for the New York Islanders. Jaroslav Halak has a shaky season and does not live up the expectations so far this season. His last couple of games do not show good numbers and it is no surprise that Greiss already played 25 games this season. He is the hotter goalie right now and deserves the nod from coach Capuano and it would not surprise me if Capuano goes with Greiss as long as he is keeping his hot streak alive.

Greiss has been a well-travelled netminder, played in Germany, Sweden and with the Sharks, Coyotes and Penguins, but has never been more than a backup. Greiss is surely going to best his most games played per season number this year if he stays healthy. He has been very sharp for the Islanders and could be a big reason why they are currently still in a playoff spot.

Agreed, there is one other Ranger next to Jesper Fast who would deserve to be mentioned here, namely J.T. Miller who is on a roll right now. Still, I believe that Fast is really underrated and one of the better bottom six players in the league. Although the undersized forward is no scorer, he already has collected over 20 points this season and plays his strongest offensively season so far. In the absence of Rick Nash, he took over a more offensive role but still plays a very well-rounded overall game.

Fast is a very energetic forward who never takes a shift off, someone who keeps his compete level constantly high. He is a player who uses his fast skating and quickness to make fast turns. A great player who fits into many different roles and who can excel in many facets of the game, someone who can help a team in a deep playoff run. Fast likely earned a reputation similar to that of Carl Hagelin when he was inserted in the top six. Hagelin’s tenure with the Rangers was filled with moves up and down the top nine, playing mainly on the second and third lines.

29-year-old Dane Jannik Hansen is in his 10th season with the Vancouver Canucks, the only NHL-organization he has ever played with. He never surpassed the 16 goal mark in a single season. He has the chance to best this mark on Friday against the Anaheim Ducks. Hansen is looking to play his most productive season, for which he needs 12 more points. He is currently the Canucks third best scorer.

He is playing on the top line with the Sedin twins and of course that gives a big spark to his numbers, but Hansen has earned to play on that line and is a great fit next to the twins with his sacrificial playing style. “When Jannik’s at his best, he’s really good. And this year, he’s been at his best for a lot of games. Maybe in the past, he was up and down. I think that’s maturity and just realizing, too, that we need him to be at his best every game”, his linemate Daniel Sedin said.