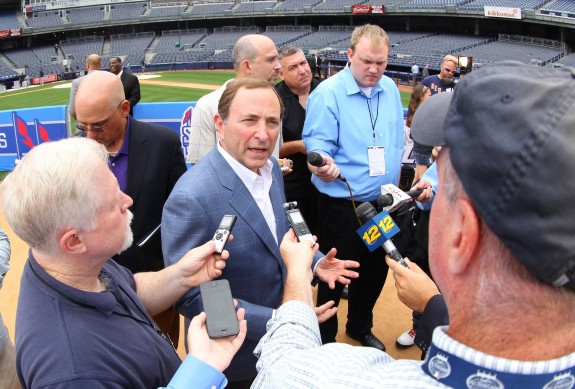 Today the NHL announced various rule changes that will be implemented during the 2015 NHL season. Many of these changes were proposed by the Competition Committee during the Stanley Cup Final which is comprised of officials representing the league and players representing the NHLPA. Unfortunately, some of the changes that were approved are ineffective solutions that will not curb any of the problems that they are meant to address. Again the league has ignored its option to crowdsource from its fans and the media, instead sticking to limit itself by thinking within inside the box and no further. Some of these changes will make some headway but overall Gary Bettman, Bill Daly, the NHLPA and those in charge of the process have fallen short yet again.

Starting in 2016, the NHL draft will then have a lottery for each of the top three picks. 30th place team could end up with fourth overall.

Getting Our Hopes Up

This announcement comes less than a month after the league made changes to the NHL Entry Draft. An innovation that was very well received for addressing the problem of teams racing to the bottom of the standings. Now the team who finishes dead last may end with the fourth overall draft pick, a very dramatic change. This type of forward-thinking is what the NHL needed to continue with when announcing rule changes. Instead what we got were a set of rules that, for the most part, are like placing a band-aid on an amputated limb.

When the Competition Committee made their announcement in June, I discussed what the NHL should do to better address the problems facing the NHL, here. For the most part, every single innovation that outside sources had come up with fell upon deaf ears. Instead the NHL moved forward with counterproductive rules.

The trapezoid was extended by two feet in order to give goaltenders more room to play the puck and protect defensemen from injuries. If the league simply eliminated the trapezoid it would allow goaltenders much more room to play the puck while also cutting down on potential risk faced by defenders. If the league truly wants to promote goaltender movement, and player safety then go all the way don’t stop in the middle of the road.

The league produced protocol by which diving would by enforced and it is even more lax than it was before. After eight infractions, EIGHT, A player or coach will be fined $5,000. Just to establish a comparison, Henrik Lundqvist was fined the same amount for doing this. While Milan Lucic was fined the same amount for doing this. I don’t claim to know anything but it seems as if the league is just throwing darts at the situation. Not to mention that the maximum fine for a first offense is $10,000. If the league wants to control embellishment and not promote it then design criteria that borders on the excessive. Suspensions, no limitations on fines and the possibility of major penalties are all solutions that would cause panic among the league most prolific divers.

In spite of the Spin-O-Rama move being banned the league did nothing to alleviate the problem that is the shootout. While this move was controversial it was entertaining and overall in a shootout there should not be any rules against scoring the same way you might do within a game. An alternative solution to the shootout would be to create a time-limit on the shooter. As it stands there is no time-limit within the NHL rulebook for a player to take a shot. The spin move may be bothersome but what about the slow shootout takers that barely maintain “forward motion.” The problem is not the Spin-O-Rama move but the “forward motion” rule itself. If the league wants to keep the shootout why not take out forward motion entirely and simply enforce a 5-6 second time limit imposing players to get to the net quickly. Not only will that cut down on controversial moves, but that would also derail the Spin-O-Rama move as well, as it is a slower move.

Some changes sound good in their presentation, but could fall flat depending on how they are implemented. The new category of Game Misconduct penalties and revision of tripping also fall under this category. Overall more extensive penalties may alleviate gray areas within the game but only time will tell. Another such rule is the expansion of video review.

In theory this sounds fine, but the word “broader” can be interpreted many different ways. In the end, will the NHL be able to fix missed calls such as these?

The league still managed to implement some small fixes that were overdue. The new face-off rule is perhaps the most notable and completely solves the problem of tactical delays. Small changes such as offensive zone puck deflections and the new hash marks have the potential to create more offense. Even the new overtime rule, though small, is a step in the right direction and may lead to more things to come such as ten minute overtimes. In this regard the league succeeded, unfortunately it is a shame that the NHL prevailed in the minor changes while failing with major changes.

Other issues facing the league today include goaltender interference, the puck over glass rule and the intent to blow rule. None of these were directly addressed. Video review is unlikely to encompass the “intent” of a referee as it is an immeasurable unit of time. The definition of goaltender interference still leaves us perplexed after the playoffs and the league did not create a more definable criteria. Lastly, the puck over glass penalty still exists to the irk of many fans, players and hockey personalities alike.

This is not to say that hockey is growing boring or dull. On the contrary the NHL is more exciting than ever. It is just frustrating that the league is incapable of using crowdsourcing as an option. This is not a new concept as crowdsourcing is now being used in community projects, businesses and even government. I don’t claim to know anything and I don’t know how the league should create its policies. What I do believe is that the more feedback, and discussion put into an idea the better the outcome. If the NHL decided to involve the millions of fans in some way to better establish rules and guidelines that could potentially create an even more successful league. Two minds are better than one, and millions are better than a few board members.