The Northeastern Huskies won the 2019 Beanpot on Monday, adding on to what has been a successful 2018-19 season. It was just their sixth Beanpot title in the tournament’s 67 years, the first four coming during a hot stretch during the 1980s. They have now taken home the trophy in two consecutive years, however. 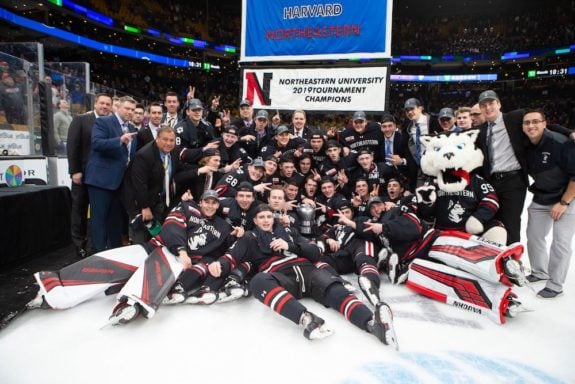 Northeastern has begun to push the successes of Boston University (30 titles), Boston College (20) and Harvard (11) deeper into the past. They have risen their flag in rebellion and come up victorious. It is a reign that those affiliated with the program hope continues for some time.

En route to their victory, the Huskies were the first to officially get on the board. However, the BC Eagles were the first to get the puck over the goal line. During a scramble in front of Northeastern’s net, the puck found its way into the cage. Meanwhile, the net had been knocked off its moorings, leading the ref to wave off the goal.

Much like in the NHL before the coach’s challenge, the officials were allowed to call for a video review. It took them nearly seven minutes, but they deemed that it was not a good goal. While there is a solid argument for both sides, it is likely that the officials saw the replay as inconclusive and thus had to go with the original call made on the ice.

BC thinks its taken the lead, but the call on the ice is no goal. Officials taking a second look.

It was quite the goaltending battle early as Northeastern sophomore Cayden Primeau and BC junior Joseph Woll took punch after punch without faltering. With 39 seconds to go in the first period, Woll finally let up. The Huskies took a 1-0 lead thanks to senior Austin Plevy who notched his third goal of the season. After a wraparound attempt by fellow senior Lincoln Griffin, Plevy crashed the crease and was able to put it past Woll for the late-period tally.

With just over two minutes left in the second period, Northeastern made it 2-0. Freshman Tyler Madden deked out a BC defenseman along the goal line, resulting in a loose puck. Freshman Matt Thomson scooped up the puck, swirled around the net and snapped a back-handed pass to senior Patrick Schule. Recognizing how much separation he had from his opponents, Schule took his time: he flattened out the puck, picked his spot and sniped the top-left corner. 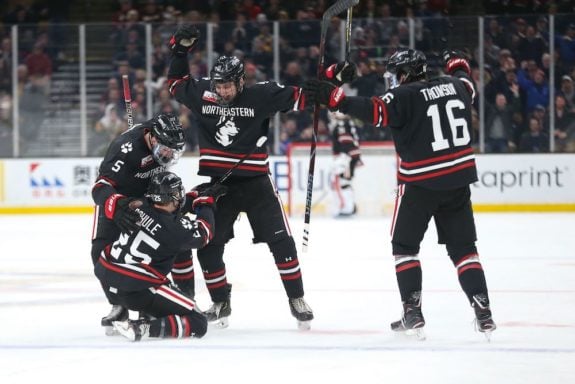 Less than 90 seconds into the third period, the Huskies took a commanding 3-0 lead. After an Eagles turnover in their own zone, the puck was sent to the slot where Liam Pecararo was waiting. His one-timed slapper was saved by Woll, but the rebound went to Griffin who was gliding to the left of the cage.

The BC netminder came out of his crease to combat the potential follow-up shot, but it never came. Instead, Griffin was able to shield the puck from his opponents who were frantically trying to cover the now open net. He skated to the hash marks and lifted a backhander under the crossbar.

It felt as though the game was over, but BC wasn’t ready to give up. With desperation and discipline, the Eagles crawled their way back into the game. Less than three minutes after Griffin’s goal, junior David Cotton responded with one of his own. Senior JD Dudek added another one with eight minutes to go in regulation to trim the deficit to 3-2.

The Eagles sent wave after wave of attackers, but Northeastern weathered the storm. Much of the credit for the Huskies’ resilience ought to go to Primeau who, despite giving up the pair of goals, made 13 saves in the third period. Northeastern sophomore Zach Solow was able to ice the game with an empty-netter, resulting in a 4-2 Northeastern victory. BC never nabbed the tying goal, leading many to turn their attention to the marker that was waved off way back in the first period. 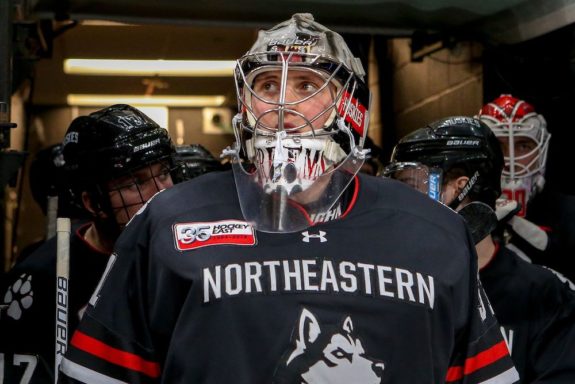 Northeastern netminder Cayden Primeau survived the BC onslaught in the third period, netting his team the Beanpot win and himself the MVP of the tournament. (Jim Pierce/Northeastern Athletics)

Primeau was named the MVP of the tournament thanks to his jaw-dropping performances. Before making 33 of 35 possible stops in the championship game, he made 26 saves on 27 shots in order to defeat Boston University in the semifinals. The sophomore netminder was a seventh-round selection by the Montreal Canadiens in 2017. The young goaltender seems to be quite the steal coming that late in the NHL Entry Draft.

Their recent successes in this tournament are evidence of the program turning over a new leaf. For many years, Northeastern was an average or below average team – not only in the Beanpot but the entire NCAA. Despite a strong 2008-09 season featuring a 25-12-4 record, the Huskies have been below .500 for the majority of the 21st century.

The 2015-16 season was a huge step forward for Northeastern. After going 2-12-3 to start the campaign, the Huskies went 20-2-2 in order to net them a Hockey East Championship and a national tournament bid. The following season, they were brought back down to Earth after getting knocked out of the conference tournament in the quarterfinals. However, they followed it up with a strong 2017-18 season that translated into a Beanpot win and another national tournament bid.

As of now, Northeastern has checked one of those boxes by taking home their second consecutive Beanpot title on Monday. While the national tournament is still in their sights, they have the rest of the regular season and Hockey East tournament to get through. They have games coming up against the Universities of Vermont and New Hampshire as well as a weekend rematch with the Eagles to end their 2018-19 campaign. 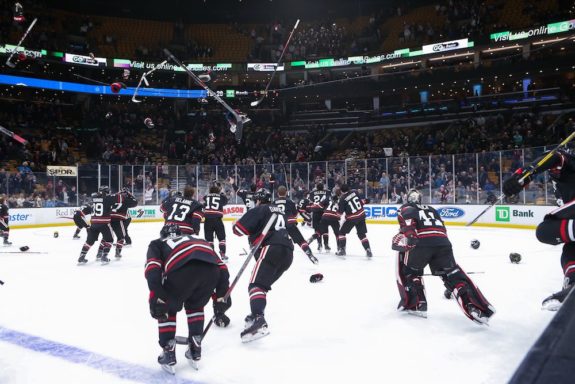 The latter two teams are the biggest threats to Northeastern’s trek onward and upward. BC currently has 21 points in the Hockey East while UNH is tied with the Huskies with 19 points apiece. While Vermont is certainly the weaker of three upcoming opponents (currently 5-11-2 in the conference), they have foiled both Providence College and UNH this season and should still give the Huskies a tough time.

The confidence this Beanpot victory brings is certainly something Northeastern will be looking to build upon. It has given some of their younger players a glimpse of tournament hockey and its heightened pace. The Beanpot is something that can (and should) be reflected upon by the Huskies when entering the Hockey East – and possibly national – tournament.