The NWHL announced its plan for the upcoming 2015-16 playoffs. In an email sent to season-ticket holders, the league revealed the ticket prices, game locations, dates and times for each round, including the Isobel Cup Finals.

The format will include all four teams making the postseason. The Connecticut Whale and Boston Pride have secured their seedings as the top two teams, while the Buffalo Beauts and New York Riveters are jockeying for the Nos. 3 and 4 seeds.

The semifinal round will begin on Friday, March 4. The Whale will play the No. 3 or 4 seed at Chelsea Piers CT and the Pride will face the remaining seed at the Raymond Bourque Arena in Beverly, Mass on the same weekend in a best-of-three format.

The winners of each round will advance to the Isobel Cup Finals, which will be played at the Prudential Center Practice Facility in Newark, N.J. the ensuing weekend.

Connecticut Whale vs. No. 3 or 4 Seed 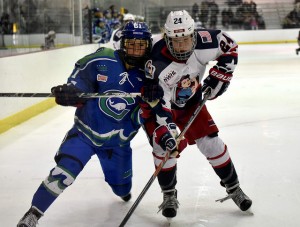 The Connecticut Whale are atop the NWHL standings (Troy Parla)

Ticket prices are as follows:

The Isobel Cup was named after Lord Stanley’s daughter, Lady Isobel Stanley, one of the first women to play hockey. According to the NWHL’s website, “Her love and passion for the game were instrumental in fueling her father’s inspiration. It is fitting that she also inspires the next generation of women to shape a trophy filled with new tradition, lore, history and class; The Isobel Cup.”

Stay tuned to the NWHL’s website for further information on the inaugural NWHL playoffs.

11 NHL Teams Without a Stanley Cup