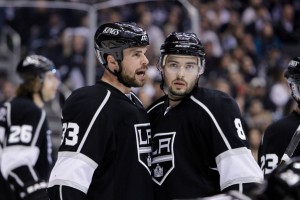 In the 44 year history of the Los Angeles Kings no one has tasted sweet victory from Lord Stanley’s Cup wearing a Kings uniform. Nearly 20 years ago (back in 1993) the black and silver led by Wayne Gretzky made their initial Cup appearance only to be defeated by the Montreal Canadiens in five close contest games.

Now, wearing similar colors, the revamped Kings are off to a fast start, with only one loss in their first five games. The off-season saw Los Angeles make some bold moves, that hope to propel the team to the next level of contention in the Western Conference.

A year ago the young and experienced team finished fourth (98 points) in the conference, only to see them exit the playoffs in the first round for the second year in a row. In fact the last time the Kings even won a series, you’d have to go back to 2002 in their big comeback win over the Detroit Red Wings.

This year expectations have risen with the additions of leader Mike Richards and fellow Flyer teammate (2005-2009) Simon Gagne from Philadelphia. Although GM Mike Lombardi parted ways with top draft picks Brayden Schenn (2009 first round pick) and 2007 second rounder Wayne Simmons, it’s clearly obvious the team is ready to make the step to challenge the likes of fellow west coast teams in Vancouver and San Jose.

With five of their six 20 goal scorers from a year ago returning (Ryan Smyth was moved back to Edmonton), the team has the overall talent to get production from each of its four lines. Although Gagne has been injured a fair amount the past two seasons he’s still contributed 17 goals in both seasons, while he missed a total of 45 games. The Kings would love Gagne to play an entire season, as he produced at least 34 goals the last three times he played over 70 games, including 47 and 41 goals in back to back years from 2005 to 2007. If anything else Gagne has been a solid playoff performer the past two seasons with his teams going to the Conference final and himself collecting a total of 14 goals during that span.

On the defensive side, the Kings are amongst the best in the league, proven by their top-five goaltender, Jonathan Quick and their incredibly young talented blue liners, led by Drew Doughty and Jack Johnson. Overall the team allowed the sixth least amount of goals last season and look to at least maintain their status as one of the better two-way teams in the entire NHL. In the blue paint Quick and former American Hockey League goalie of the year, Jonathan Bernier could easily be one of the best goaltending tandems in the league rivalling the likes of Tim Thomas and Tuukka Rask of the Bruins. Both are still relatively young, but have proven they are legit and like the rest of the young talent on the roster they’re ready for the next challenge.

The 2011 season should be an exciting one for the entire Los Angeles Kings organization, as of right now they may be a piece or two short of completing the Conference championship puzzle, but a key addition along the way or another young player making huge progress could very well see them become the top team in the West or  at worst win their first playoff round in 10 years.

Success is in the near future for this young and talented franchise, for many years to come. And this just may in fact be their year, as they are off to a fantastic start with only one regulation loss in seven starts, one point off of conference lead.

2 thoughts on “On the Rise, LA Kings Hope to Contend”