After losses to Detroit and Minnesota, I came away from last night’s 3-2 “brutal” victory over the St. Louis Blues more dumbfounded than I’ve ever been. The Canucks play of late has raised the fans’ eyebrows and heart rates. How does a team get out shot so badly in two periods, almost blow a 3-0 lead, and still be able to squeak out an ugly win like that?

Thank goodness for Cory Schneider’s heroics. Here are the highlights:

Granted, this isn’t 1995 when I didn’t expect much from the Vancouver Canucks and their surprising magical run to the Stanley Cup Finals the year before. They dealt with a shortened season with just the expectation to make the playoffs (finishing sixth in the Western Conference) and trying for another long run, only to be swept by the Chicago Blackhawks in the second round. And this isn’t 1996 when the team barely squeaked into the post-season with a modest 32–35–15 record, only to receive a first round beat-down by the eventual Stanley Cup Champion Colorado Avalanche. For the next four seasons afterward, they failed to make the postseason.

Sensing a trend? Are we expecting another drop to the bottom of the roller coaster ride? If so, we may not see anything special from Vancouver for a very long time. In over forty years, the Canucks have made it to the Finals in 1982, 1994 and 2011, which were 12-17 year gaps. And Vancouver has lost every single one.

What’s worse is that the fall from grace this time around seems to have started earlier than expected. This from a near-perfect 2011 squad that had everything going for them. The best seasons, especially from the Sedin Twins and Roberto Luongo, are clearly behind them. If not for sporadic good plays from Zack Kassian, Jason Garrison and Cory Schneider, the Canucks would’ve faltered from the start. The wins are still coming but they are getting “stupid” by the minute. If this disturbing trend continues and there is impending disarray for the next several years, we might not be seeing the Canucks in another visit to the Stanley Cup Final until 2025. Can anyone build a hot-tub time machine now?

Current Standings (Can someone take me to 2025?) 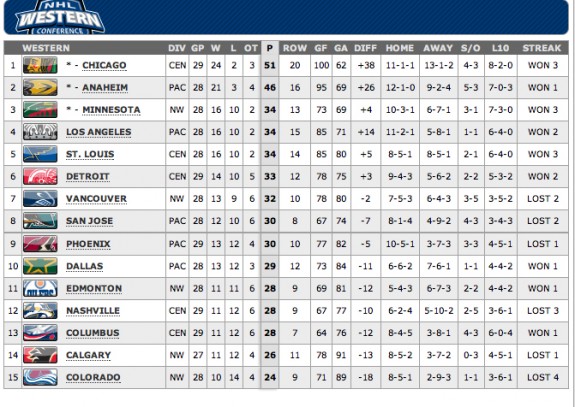 Where to go from here?

It appears that while the Canucks are seventh and slowly faltering, the other Western Conference teams are doing just fine. Despite the loss, St. Louis Blues doesn’t have to worry about their efforts. Neither do Columbus, Minnesota and Phoenix or even Calgary or Edmonton despite them being outside of the playoff bubble.

In Vancouver, expectations are different. The pressure to win is so high and intense that the atmosphere around this town can be intolerable at times. How did the Canucks come so far only to fall down so hard? So if the team fails in this shortened season, what’s their Plan B? What are they doing long term? The problem with the Canucks now is that there is no contingency plan to bring in young talent. What kind of scraps could they collect from the next amateur drafts once all the good talent is taken? Who’s a rising stock with the Canucks’ minor affiliate team the Chicago Wolves right now and next year? Can you name someone that the Canucks could try & trade for, who could meet the Canucks’ needs for improved goaltending, power play, special teams, shorthanded, defence, offence, goal scoring, improved goals against, and everything else?

It’s not the quantity of wins and losses that worries me; it’s the quality of those brutal wins and lopsided losses. One night a blowout, next night an ugly win. How much can the average Canuck fan take?

If things don’t get fixed right away to make consistent plays, protect leads and fix their game, consider this shortened season a write-off and forget about great expectations for the next several years.