Welcome to Senators’ Weekly, where you can catch up on the past week of the Ottawa Senators throughout the 2018-19 season. From trending topics to surging prospects to news and notes, this is your weekly roundup on all things Sens.

The Senators went 1-2 this week, falling to the Nashville Predators 3-1, doubling up the Detroit Red Wings 4-2 and then once again losing to the Montreal Canadiens to a very similar 5-2 score. Over the last two weeks, the Senators have lost to the Canadiens three times, all by a score of 5-2. The club is 14-16-2 and seems to be slipping further away from a playoff position. They are six points away from the Boston Bruins for the final wild-card spot.

They sit seventh in the Atlantic Division, 13th in the Eastern Conference and 24th in the league. They have three games left before the Christmas break and will look to head into the break on a winning note. Here are the notable headlines and stories from the past week.

Batherson Headed Back to Belleville Senators?

Drake Batherson was called up from the Belleville Senators for Ottawa’s Nov. 15 game. Prior to being called up, he had seven goals and 20 points through 14 games. That was good enough to lead the team and was tied for second in the league. His hot streak continued in his NHL start, collecting five points in his first three games playing with Matt Duchene on the top line. Since then, Batherson’s streak has come to a screeching halt, with only two points in his last 13 games. It may be in the club’s best interest to send the rookie back down to Belleville to finish the season.

On top of Batherson’s slow production, his defensive game still needs some work. He’s a minus-three, which isn’t too bad, but when you combine that with his team-worst 33.2% Corsi-For percentage (CF%), it doesn’t look good. The team might send Batherson back down to the AHL where he can succeed and gain confidence at this crucial part of his career. 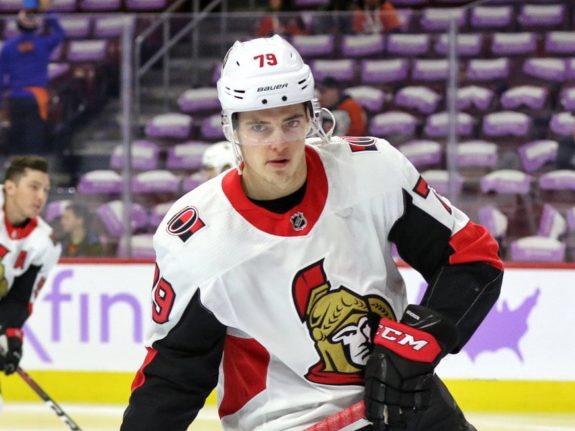 General manager Pierre Dorion touched on Batherson and what they would like to see from the 20-year-old this season and moving forward.

“We’ve got to see progression from Drake Batherson,” Dorion said. “If he ever comes back [to Belleville], he’ll be better for it. If he stays in Ottawa, we just want to make sure that he continues developing.” (From: “Senators trying to make sure Drake Batherson, without point in six games, has success” – Ottawa Sun – 12/14/18).

Head coach Guy Boucher is more concerned with the offensive production from Batherson than his defence though, which he mentioned speaking to reporters.

“The one thing right now, and this is contrary to a lot of the young guys, is that they usually have trouble defending and being in the right places, and then you’re going to see some offence and some jitters. Right now, [Batherson’s] doing very well defensively. He’s very smart, he’s working very hard, so he doesn’t hurt us, but he hasn’t produced.

“It’s more of a mental production thing that it’s being able to be in the NHL. He’s definitely able to be in the NHL, but right now because he’s missed some goals and hasn’t produced, that’s where the danger is to start to doubt himself, and we don’t want that.” (From: “Senators trying to make sure Drake Batherson, without point in six games, has success” – Ottawa Sun – 12/14/18). 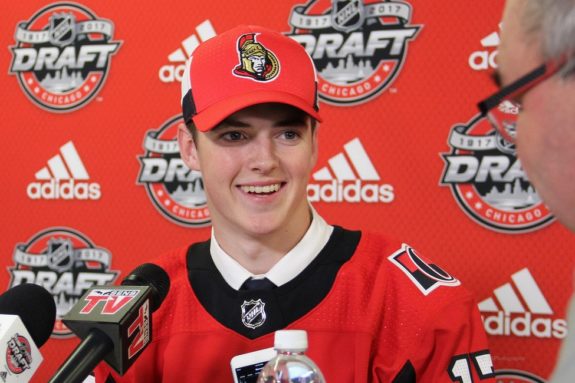 Drake Batherson had a hot start, but has cooled off lately (Amy Irvin / The Hockey Writers)

Even if he’s sent down though, it may not be the last of Batherson for Ottawa this season. He’s played in 16 games, burning the first year of his entry-level contract past the nine-game limit. The team would be able to call him up at any time should they need someone, or if Batherson proves that he’s just too good for the AHL. That being said, seeing him succeed with Belleville may be best for his development and that needs to come first.

Unlike Batherson, Christian Jaros will be sticking in Ottawa. The 22-year-old is now the fourth rookie told to find a place to stay in Ottawa, following Colin White, Maxime Lajoie and Brady Tkachuk. Jaros has played in 23 games this season, collecting his first NHL goal and adding four assists. Until now, the defender has been living in a hotel, always preparing himself to be sent down to Belleville should the time come.

With a potential return today in Montreal, we chat with Christian Jaros about being told to "get a place" in Ottawa, his recovery from a lower body injury and more.

The defender won’t be putting up the points like Thomas Chabot anytime soon, but he’s a solid stay-at-home defender who adds a physical presence on the back end. He’s third on the team in hits with 50, behind Tkachuk (54) and Mark Borowiecki (52). He’s also added 34 blocked shots.

When the roster announcements for the 2019 IIHF World Junior Hockey Championships, the Senators had three prospects in selection camps. Team Canada had Alex Formenton and Jacob Bernard-Docker, and Team USA had Josh Norris. Now, as the Canadian selection camp has wrapped up, Josh Norris is the lone prospect for the organization who still has the chance to play in the tournament.

Formenton would have been a lock on the Canadian team if not for suffering an injury during an exhibition game and Bernard-Docker was a long shot to make the team, but the 18-year-old being invited is impressive enough. That leaves Norris on the American team. Norris has been on fire in the NCAA with the University of Michigan, with 10 goals and 19 points through 17 games. He should get top-six minutes behind the projected number-one pick for the 2019 NHL Entry Draft, Jack Hughes.

With Formenton and Bernard-Docker officially out of the running for the Canadian roster, Senators fans will be able to focus their attention on the 19-year-old on Team USA. It should be a good preview of what’s to come from the centreman that was acquired from the San Jose Sharks in the Erik Karlsson trade.

USA Hockey’s John Vanbiesbrouck, the assistant executive director of hockey operations, has big hopes for Norris and not just for the World Juniors.

“I’m sure everyone’s looked at it as, well he was just a late-round pick of San Jose, he’s just a good prospect,” Vanbiesbrouck said of the 19th-overall pick in 2017. “But we’re going to depend on him a lot and he’s going to be a good story for the tournament because players like that have a possibility to emerge because they’re consistent every shift. Maybe, just maybe, he’ll play above what everybody has him slotted to do.

“I think between Brady and Josh Norris, the Sens are shaping up to have those hard-nosed guys who are going to allow the other talent to be really talented. He’s going to be a big part of their team.” (From: “Traik-eotomy: Alexis Lafreniere could overshadow Jack Hughes at world juniors” – Toronto Sun – 12/12/18).