It was at the 12:29 mark of the 3rd period during Saturday afternoons’ game at the Wells Fargo Center in Philadelphia when Flyers PA announcer Lou Nolan informed the crowd of a rarity.  That rarity being that Ottawa Senators Captain Daniel Alfredsson had received a 5-minute major penalty for cross-checking and a game misconduct.  The Sens lost the game to the Philadelphia Flyers by a score of 2-1 and while that may have been the final score line, as we all know, the score doesn’t always tell the whole story.

In short, this season has been full of different storylines for the Sens thus far, from injuries to key players to the great coaching of Paul MacLean, to a group of young players stepping up and proving themselves.  Saturday’s game was no different as it developed its’ own unique storylines throughout, and the outstanding goaltending duel between Ben Bishop and Ilya Bryzgalov aside, the focus was on the very physical and at times borderline play between the two teams.

Zolnierczyk Hit And The Impact On The Game:

The game had started slowly and there wasn’t a whole lot to talk about in the opening half of the first period, however that all changed midway through the first frame when Flyers forward Harry Zolnierczyk came through the middle of the ice with speed and caught Sens defenceman Mike Lundin with a devastating blow.  As with any big hit and controversial play in today’s game, how people saw it depended largely on what team they root for and or where they stand on the interpretation of the current rules.  The officials saw it clearly as a major penalty for charging and a game misconduct for Zolnierczyk, while both teams had their own take.  The Sens, as any team would, took exception to the hit which knocked Lundin out of the game and that prompted Ottawa’s Kaspars Daugavins to square off with one of Philadelphia’s tough guys and super pest Zac Rinaldo.  The Flyers and Head Coach Peter Laviolette on the other hand did not believe the hit was anything other than a hard and clean play that got the team going.  Regardless of the differing views on the play itself, the impact of the hit on the game was apparent as both teams raised their physical play to an extremely high level, bordering on nasty for the remainder of the afternoon. 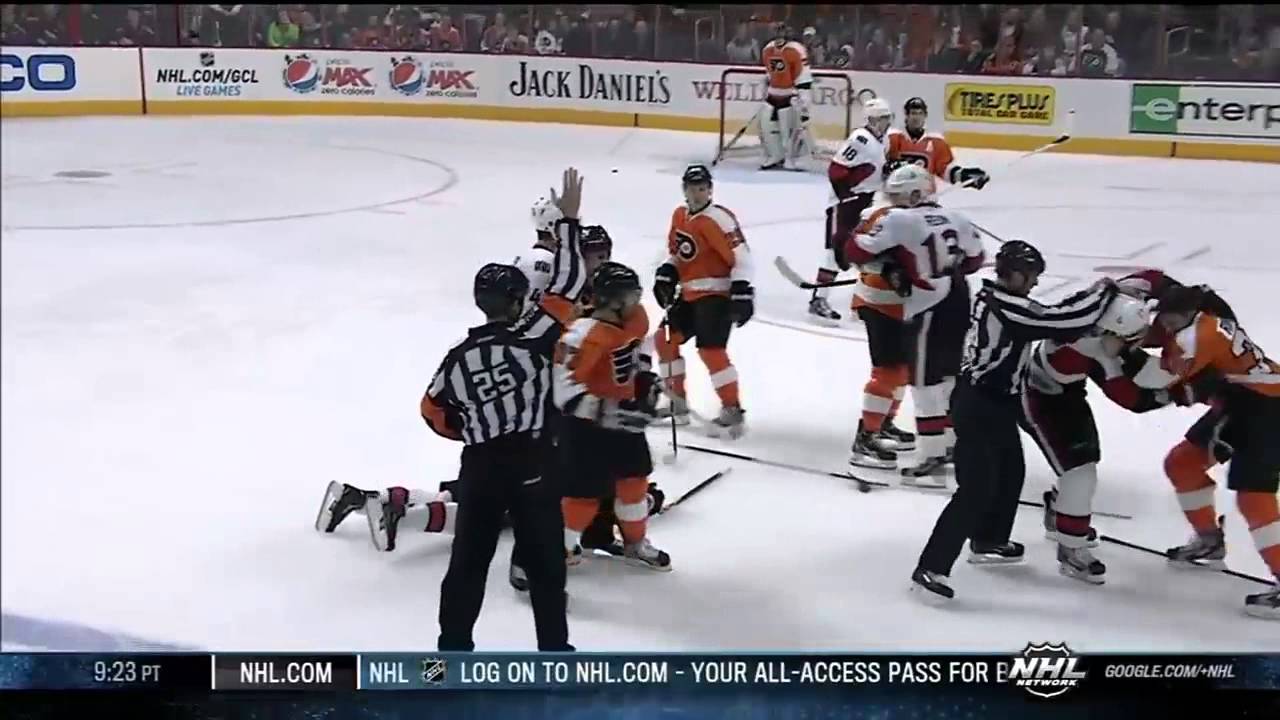 A Battle Of Two Different Teams:

Entering the game on Saturday the Flyers were the league leaders in penalties, averaging over 17 minutes per game with nearly 20 Majors thus far, a stark contrast to the Ottawa Senators who sat in the bottom half, or the top depending on how you look at it, of the National Hockey League in PIMs and had only 4 Majors themselves.  This is a Philly team that may not be the Broad Street Bullies of the past but they are still extremely tough to play against.  With a combination of high level skill, physical toughness and a desire to irritate their opponent, they present a tough test for any team as does playing in front of the intense Flyer crowd.  Ottawa on the other hand tends to lean primarily on their skill to win games and while strong defensively they are not known to be overly aggressive or intimidating.  It is apparent that the Sens lost an element of “toughness” after the team parted ways with both Matt Carkner and Zenon Konopka during the off-season and that has meant the entire roster has had to play bigger, with each player doing their part to make the Senators a tougher team to play against.  It’s become a true group mentality in all things from scoring and defending to looking out for one another and that was put to the test on Saturday by the Flyers and the rabid fans in the “City Of Brotherly Love.”

Midway through the 3rd period of what had become a penalty filled game, with the Flyers leading 2-1, Senators defenceman Chris Phillips was hit hard and unexpectedly along the wall by Zac Rinaldo.  It was another questionable hit and that team mindset Ottawa has to fight for one another showed itself.  Sens Captain Daniel Alfredsson didn’t like the play and made the decision that something needed to be done.  He took it upon himself to go after the Flyer tough guy and delivered a cross-check that rode up to Rinaldo’s face dropping him to the ice.  Naturally a scrum ensued and after all things were settled Alfredsson had received only the second major penalty in his career and was ejected from the game, while Rinaldo received a roughing minor for his part.  The Sens ended up killing off the penalty and having a chance to tie things late but were unable to do so and lost their second straight game. 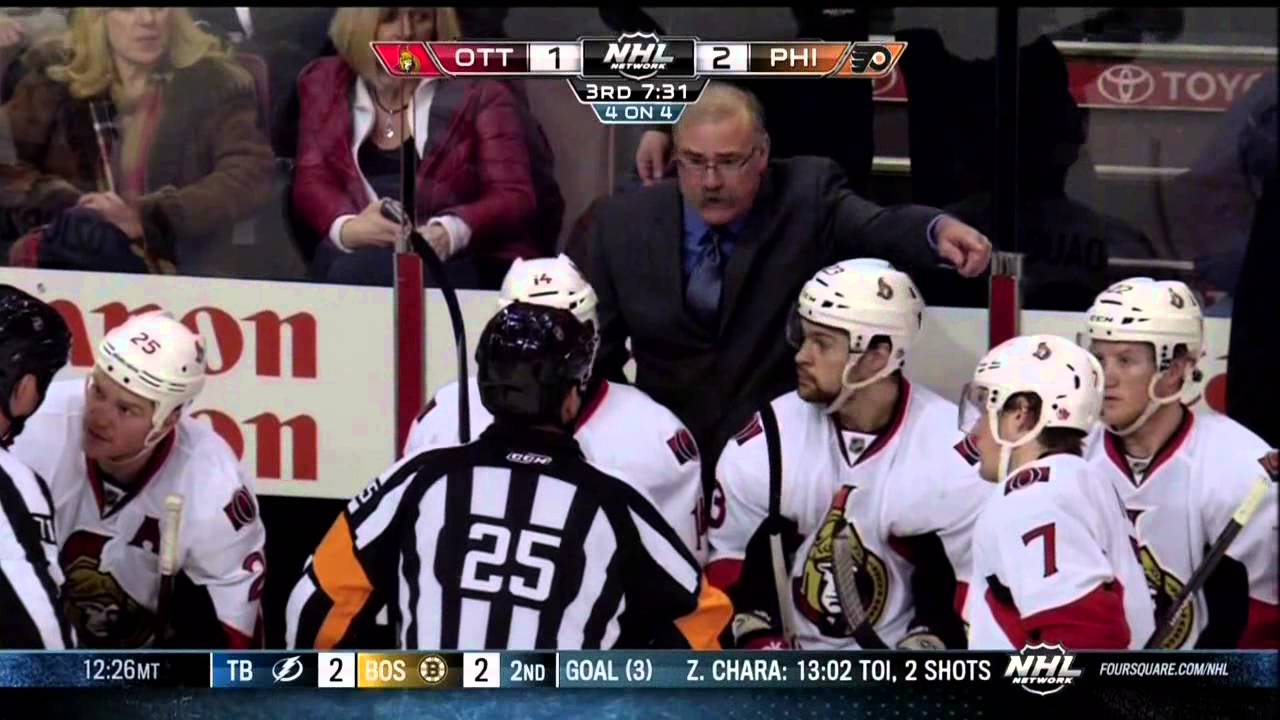 Alfredsson, the long-time Senator leader, is hardly known for his physical play and accumulating penalty minutes, but he has never been one to back down when he or a team-mate is challenged.  To his credit he admitted following the game that the major penalty wasn’t the best way to respond and that it hurt the team’s chances to earn points.  That being said, with the Sens losing it would be easy to say that Alfredsson’s decision was selfish and the wrong move, and there will be critics who do say so.  However there will also be those who saw it as a necessary show of force from the team’s leader who felt he needed to make a statement, not only to the opposition, but to his own team as well.  The Senators, with all the injuries to star talents, are a wounded team but they have shown a continued fight and refusal to be run over by anyone and that is led by Head Coach Paul MacLean and his veteran Captain Daniel Alfredsson, who both believe that this team has what it takes to continue winning no matter who is in the lineup.  This is a young group fighting for their season and despite some having written them off they refuse to give anything less than maximum effort.  While Alfredsson and his mates admitted the best form of revenge is winning on the scoreboard and said the team needs to be more disciplined moving forward, don’t expect any apologies from this fiery group as they continue to fight their hardest towards another playoff run.  One game does not make a season but one play and gesture can absolutely help define it and Sentors fans will be hoping to look upon this one when the season ends as a major five minutes in a positive run for Ottawa.