With 10 games left in the regular season, the Ottawa Senators will be one of the most interesting storylines heading into the playoffs. As it stands right now, the team sits in the infamous 6th playoff position and would face the red hot Washington Capitals. The final stretch will be interesting for the suddenly struggling team as it is very unclear as to whom the Senators would play in the upcoming playoffs or if they even make the playoffs for that matter. The Senators have not picked the best time to play inconsistent hockey, but that’s to be expected with so many injuries and a very young team.

The Senators sit two points up on the eighth place New York Islanders with a game in hand and will need to find their scoring touch if they want to start winning hockey games. The Senators are only two points behind the Toronto Maple Leafs for the fifth spot, but it appears anything higher than that is out of reach. With Craig Anderson coming back from injury, the Sens hope he can regain his earlier form from the start of the season. Milan Michalek is expected to help carry the offensive load when he returns from injury in the next week or two and Jared Cowen looks to be almost ready as well which would be a huge boost on the back-end.  While the future is unclear, it’s likely the Senators will be a playoff team at the end of the regular season. That said; let’s take a look at four potential match-ups for the Ottawa Senators:

The Senators have played the Penguins three times in the playoffs since the 2006-07 season. Their dynamic offense mixed with our stellar goaltending would make for a great series. With the additions of Brenden Morrow, Jarome Iginla, Douglas Murray, and Jussi Jokinen; it’s clear that the Penguins believe they have a Stanley Cup contending roster that should be able to defeat the Senators with ease. While that may be true, the pesky Sens have been defeating odds all season and winning games they don’t even belong to be in. Don’t expect that to change heading into the post season. The one thing the Senators have on the Penguins is goaltending. Craig Anderson has been incredible since being acquired by the Sens two seasons ago and was fantastic in the seven game series against the New York Rangers last spring. Marc-Andre Fleury is one of the most inconsistent goalies in the NHL and the Senators could really capitalize with the return of Milan Michalek and Jason Spezza leading the offense. This would be a heated playoff series especially since the Matt Cooke/Erik Karlsson incident. I would expect the Senators to play a very physical series and make sure the Penguins don’t get let off easy. It would be an interesting series no doubt, but I think the Penguins dynamic offense would be too much for the young Senators D-core (minus Karlsson obviously) to handle.

The division rivals would make for a great series against the Senators and would mark the first time the both teams have ever met in the play-offs.  This would be a great goaltending battle between two of the league’s best in Craig Anderson and Carey Price. I think Montreal has better depth on defense with Karlsson injured but the offense I would give to the Senators. While the Senators have scored almost twenty-five less goals, the depth this team has is second to none. Montreal’s top two lines have been producing at a great pace and would need to be shut down if Ottawa wants any chance in the series. One the backend, PK Subban has been nearly unstoppable since the start of the season. He would be another player the Senators would have to shut down if they hope to have any success in the postseason. I think Ottawa stands a pretty good chance if they have solid scoring contribution from all four lines. If Ottawa can contain Montreal’s top-6, then I could see Ottawa coming out on top against of the best teams in the league.

In the battle of national capitals, this is the ideal match-up for the Senators despite Washington being one of the best teams in the NHL as of late. With Alexander Ovechkin playing at the top of his game, the Capitals remain a dangerous team in the Eastern Conference and a team no one wants to be matched up with in the first round. With the addition of Martin Erat and the return of Brooks Laich, Washington’s offense appears to be as good as ever. Ottawa’s style of play should be able to generate tons of scoring chances against their lackluster defense. Ottawa’s goaltending is also considerably better then Washington’s as well. Braden Holtby does not possess the same ability as Craig Anderson when it comes to stealing games. I think Ottawa would have a very good shot at winning a series against the Capitals. It would provide an interesting and entertaining series; I just don’t think the Capital’s defense core is enough to stop the Senators and their play style.

Boston has certainly had Ottawa’s number for the past few seasons and don’t expect that to change anytime soon. Besides facing Pittsburgh in the first round, I think the Bruins would be the second hardest opponent to face. They play a very physical and aggressive style that screams playoff hockey. I think Ottawa could match the toughness, but eventually players like Milan Lucic, Nathan Horton, and Brad Marchand would become too much to handle. Mix-in Selke winner Patrice Bergeron, Tyler Seguin, David Krejci, and Jaromir Jagr; and you have one of the deadliest forward cores in the NHL. As for defense, unless Karlsson returns for the Sens, it’s not even close. While their defense adds very little offense, they are sturdy like a rock and play with an edge. While I would take Craig Anderson over Tuukka Rask, they are both fantastic goalies that can make big saves and win you hockey games. On paper the Senators do not stand a chance, but I think this series could be similar to the New York Rangers one last year and go to seven games. If the bounces go the right way, I could see the Senators beating the Bruins in a very close series. 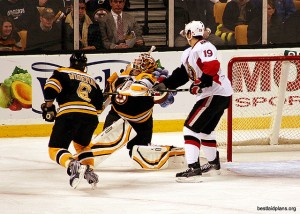 In playoffs, anything can happen. I think the Ottawa Senators are capable of winning against any team in the league on any given night. It will be interesting to see how a best of seven series plays out because if there’s one thing Sens fans have learned this season it is to never count them out. The Senators will be underdogs heading into the playoffs, but don’t be shocked if this team surprises with a series win or two.